On 25 October 2017 the call for applications for the Max Weber Fellowships closed for all departments but Economics, which continues to receive applications into Spring 2018. The programme received 1,124 applications from 92 countries, lower than the 1,346 applications from 99 countries the previous year (Figure 1). Still, the large number in 2016 was an outlier in the general trend of applications since 2006, whilst applications in 2017 are much more in line with it. The main drop in applications regards the United Kingdom (-34), Turkey (-29), Canada (-23) and India (-16). 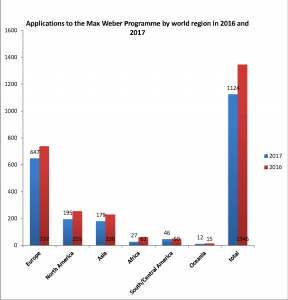 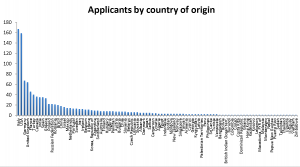 The gender ratio (Figure 3) is skewed in favour of male applicants (58%). The Robert Schuman Centre and LAW, however, have attracted more applications from women than men, while ECO registered the lowest percentage of female applicants (31%), followed by History and Civilization (37%) and Political and Social Sciences (44%). 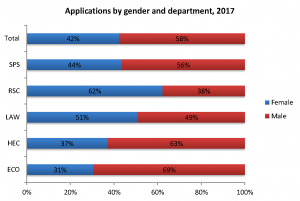 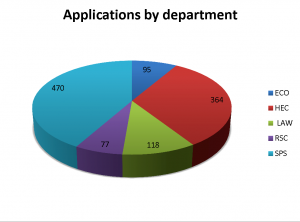 As in the previous calls, applicants had the opportunity to choose a Thematic Research Group (TRG) as an interdisciplinary forum to discuss their common research interests. Alternatively they could opt out of the thematic frame. This year the number of those opting out was much reduced (270) and only marginally higher than that of those choosing the most popular group (232) (Figure 5). 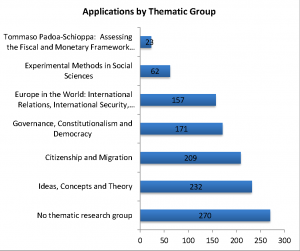 The composition of preferences for a TRG by department shows that each TRG attracts from all disciplines, although some received more applications from a given department (Figure 6). Applications to the RSC, for instance, are highly concentrated in the group Citizenship and Migration, whilst applicants to ECO are split between the Tommaso Padoa Schioppa group and the newly formed Experimental Methods in Social Sciences group. The largest number of applicants to ECO however still chooses to opt out altogether (Figure 6). 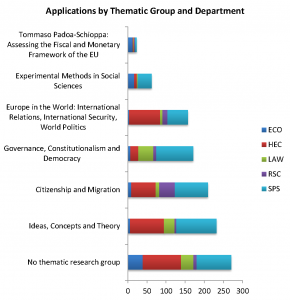