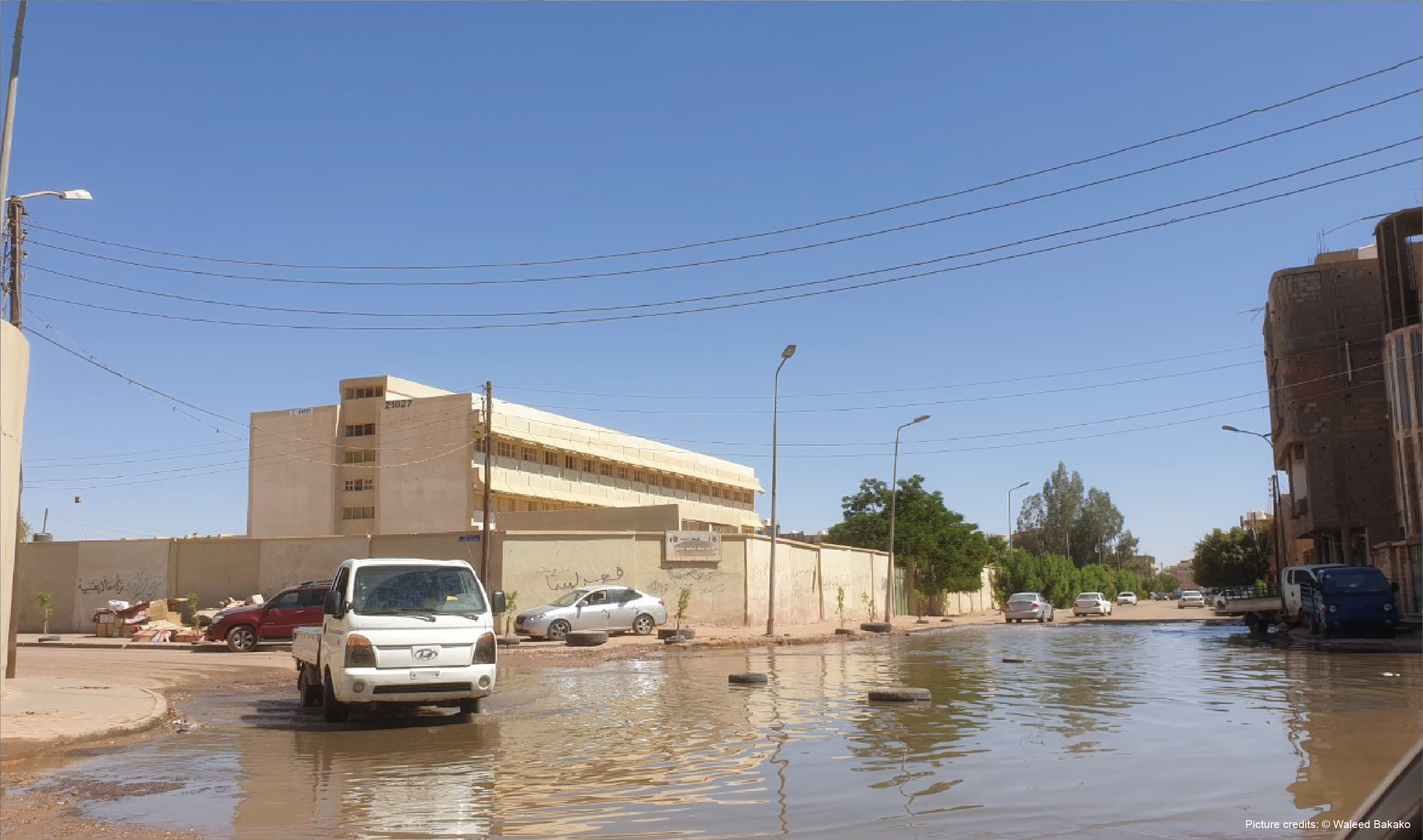 The conflict that Libya endured between 2014 and 2018 weakened both the administrative and security authorities’ control over utilities and infrastructure. The resulting insecurity greatly affected many sectors and has had repercussions in Sebha, the most populous city in southwestern Libya. Among the sectors affected is the water and sanitation sector. In addition to the conflict, there are various factors that have contributed to the crisis in the sector in Sebha. These include a lack of investment in the sector in the last decades; the deterioration of pipelines in the water distribution system; general mismanagement; and an absence of financial support.

Since its formation, the Government of National Unity (GNU) has addressed this crisis through the “Reviving Life” initiative: announced by the prime minister Abdul Hamid Dbeibah, 27 August 2021.[1] However, the question remains whether the government will be able to find long-term solutions to the crisis and ensure provision of services. In this blogpost, we show how different factors have affected the water and sanitation management sector in Sebha.

How has the water and sanitation crisis affected life in Sebha?

The water and sanitation crisis has been exacerbated by high temperatures, relatively low humidity, and infrequent rainfall in the city.[2] The situation has also been made worse by the stoppage of pumps in both the main wastewater lift station and the purification and treatment plant, which provide sanitation services. The crisis has had an impact on Sebha, which has a population of approximately 170,000 to 200,000 residents,[3] in addition to 20,700 internally-displaced persons[4] and 60,000 migrants.[5]

The crisis had very practical consequences in early 2018, after large amounts of water leaked out of the pipeline network and flooded the streets in neighbourhoods such as al-Mahdia, Soukra, al-Jadid, and Abdelkafi close to the main lift station: most water and sewage lines were clogged. This led to traffic jams and made it difficult for residents to go about their everyday lives.[6] Some were forced to close their shops or leave their places of residence and relocated to areas with better services. This prompted protests against the local authorities’ handling of the situation with the danger of escalation should no improvement materialise.[7] 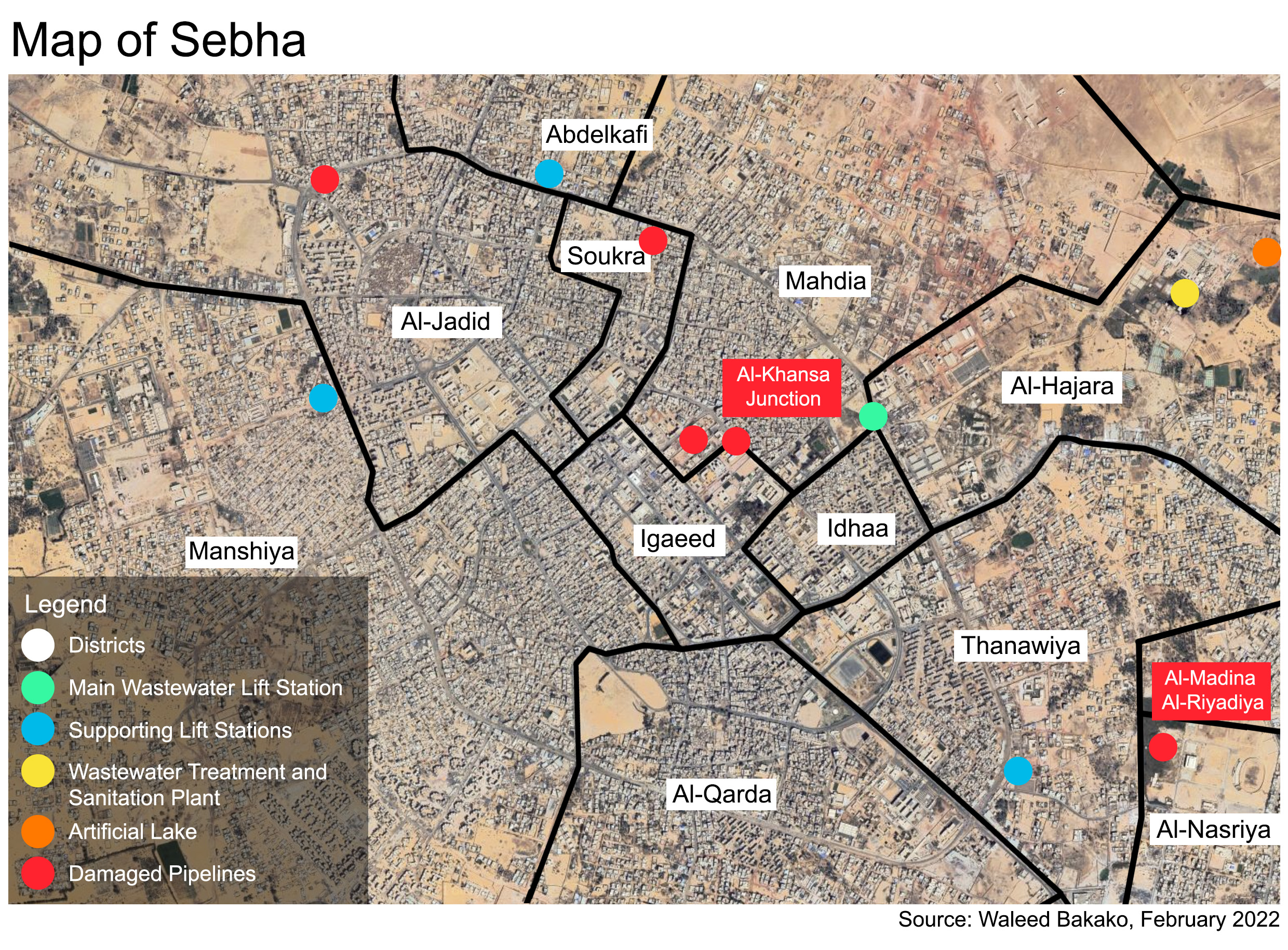 How have things got this bad?

The lack of societal stability and security in Sebha has had a detrimental effect on water and sanitation services. In December 2017, the purification and treatment plant located in al-Hajara was targeted by an armed group that systematically looted equipment and spare parts. The security forces and local authorities did not intervene for months,[8] and the station eventually stopped working.[9] Water treatment also came to a halt, and the plant only pumped contaminated water for disposal into a reservoir in the al-Hajara area.

The direct damage to the main sewage lines was made worse by the negligence of some residents, as some threw debris and waste near manholes. Tires and large rocks were found in manholes connected to the main sewage system lines in al-Nasriya in al-Madina al-Riyadiya, and at the al-Khansa junction in al-Mahdia.[10] The sewage system has repeatedly been clogged due to the accumulation of debris in shafts and conduits.

Additionally, Sebha has struggled with poor infrastructure and deteriorating water and sewage systems. The city’s pipeline network was installed during the early 1970s and is now at the end of its service life with 80 percent of the system in need of repair.[11] The pipelines in the Idhaa neighbourhood are old, made of asbestos, and are unable to support the city’s growing population. Likewise, the deterioration of leaking sewage pipelines means that only 10,000 cubic meters of an original 40,000 cubic meters of water reach the wastewater lift station in al-Mahdia. The rest leaks out through underground pipes.[12]

There are also pipeline networks that the Housing and Infrastructure Board (HIB) had begun to install during 2009-2010 but which remain incomplete. This has posed a problem for maintenance teams from the General Company for Water and Sanitation (General Company).[13] It is not possible to work on repairing this dilapidated system without maps and plans that clearly indicate where the pipelines are located and their conditions.[14]

In terms of power, sewage plants draw their energy from the public electricity grid. However, there has recently been an increase in electricity consumption in the city and, with it, increasing power outages lasting several hours. These have, naturally, affected the work of both the main wastewater lift station and other nearby stations. The main lift station in the al-Mahdia area plays a key role in the city’s sanitation, as it pumps sewage water from residential neighbourhoods to the purification and treatment plants.[15] To keep the station operational, the General Company was obliged to provide it with generators. However, the company has generally been unable to provide the necessary fuel to the station to keep its various generators. The company relies on Sebha’s oil terminal to meet the generators’ daily diesel fuel needs. However, it has only been allocated 10,000 liters per month: it currently consumes 1,000 liters of diesel fuel per day. This has led to longer power outages for the stations in the load-shedding hours during the remaining 20 days of the month. 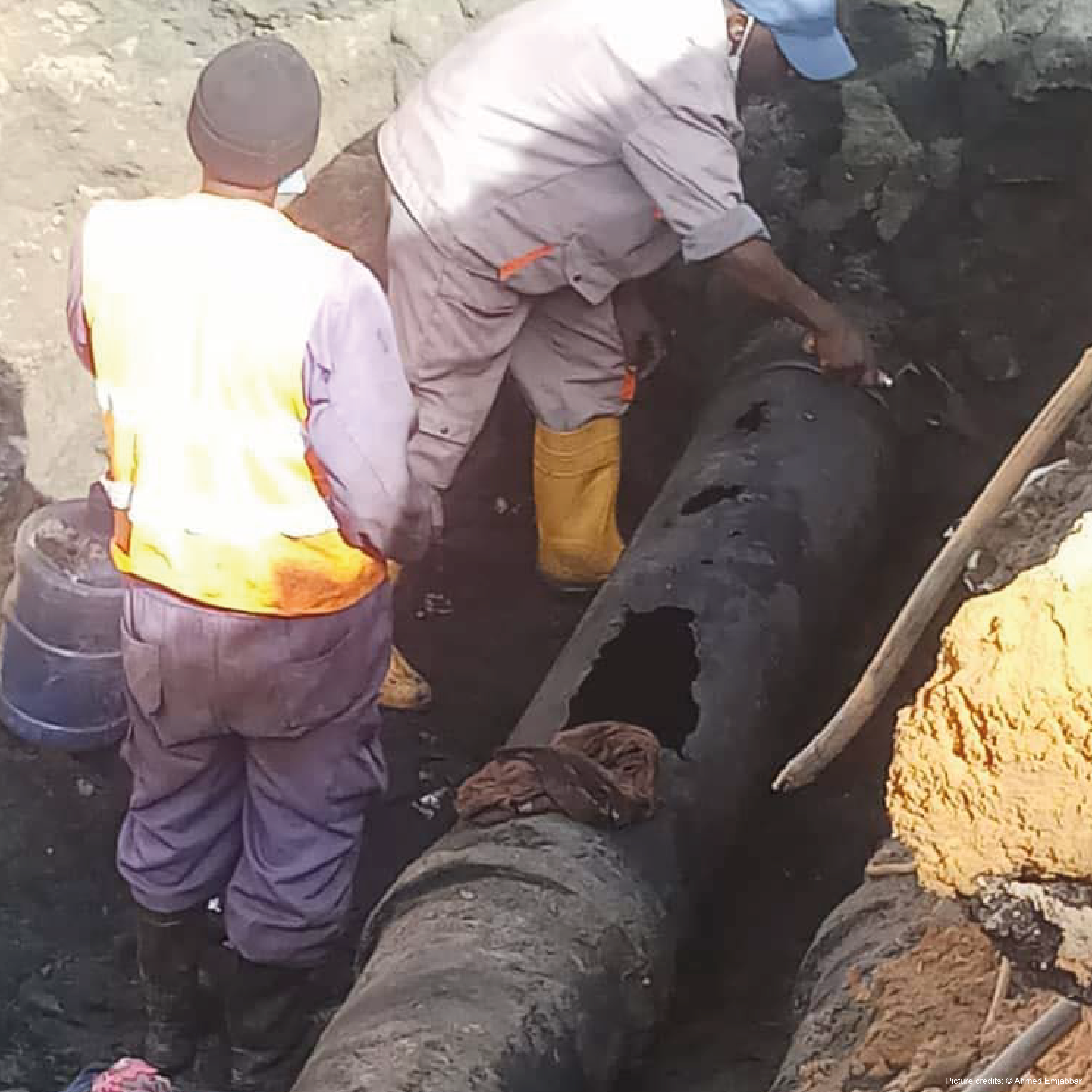 What are the administrative challenges facing the water and sanitation sector?

There are four factors that have contributed to dysfunction in the water and sanitation sector and the lack of regular infrastructure maintenance.[16] First, the sector has experienced mismanagement during recent years: this has been accentuated by a lack of transparency and an indifference to the city’s water and sanitation problems. For instance, the General Company did not pass on sufficient fuel to operate the electric generators of the stations, despite having received adequate supplies from international organizations.[17] Second, the coordination of the sector’s work between the municipal council and the General Company has been limited. This has resulted in the implementation of programs without any consultation with the company.[18] This has seen , in turn, an unqualified company being commissioned to install the sewage pipelines and, predictably, errors in their installation. Third, there was an overlap in the prerogatives of both the municipal council and the General Company as these prerogatives were not clearly defined. For example, the former municipal council often took upon the role of the General Company in implementing urgent projects. Fourth, some citizens have directly interfered with the water and sewer system by digging their own unapproved wells.[19]

In terms of funding, the General Company has had problems with funding and has lacked the necessary support from the government for carrying out maintenance and operations. The General Company faced difficulties in importing the spare parts and service equipment needed to maintain the station.[20] The company has also faced challenges in obtaining bank credit and, as a result, reduced the amount of cash made available to the heads of its departments and offices. Before 2011, the Sebha branch of the General Company was allocated 150,000 dinars per month to carry out the station’s daily operations.[21] In 2021, this amount was reduced to 2,000 dinars per month in Sebha: a sum which does not cover the company’s fuel and oil needs for the plant and for other machinery.[22] This lack of support has been a challenge for the General Company’s administration in trying to keep the water and sanitation system working.

The government’s response to the crisis

The GNU has considered the water and sanitation crisis in Sebha to be a priority issue in its plans for developing various sectors throughout the country. The Minister of Housing visited the city on 20 July 2021 and inspected the purification and treatment plant at al-Hajara.[23] After his visit, the government developed a delivery plan for renovating the treatment plant as part of its “Reviving Life” initiative. The GNU delegated the HIB to carry out the renovation and allocated 285 million dinars for other projects related to water and sanitation in the city.[24]

On 12 September 2021, the government commenced the procedures to start work on the renewal of the purification and treatment plant: the plan had been stalled for more than five years. Contracts were subsequently signed with a group of Egyptian companies. The project plans include expanding the current plant and building a new plant capable of processing 30,000 cubic meters of water.[25]

The completion of these two plants would mitigate the sanitation crisis in the city. However, this is only part of the problem. There are also problems with the water pipeline network, which will require comprehensive repairs. For example, there are numerous contracts for projects that aim to repair the water pipeline network. These have been inactive since 2011, and have yet to be implemented. In addition, there are other projects that have been completed but not yet delivered to the General Company for Water and Sanitation.

The future of water and sanitation in Sebha

The purification and treatment plant will be of great importance for the city of Sebha. If the project is completed, it will help mitigate some of the challenges that residents and the local authorities have faced in dealing with the water and sanitation crisis. However, the implementation of the project will encounter obstacles, particularly security issues. A project of this magnitude requires security forces to protect work crews, the site, its equipment, and machinery. There have been incidents at the plant that show the importance of these measures.

Administrative coordination among local authorities and sufficient funding will be equally important. Similarly, the prerogatives of both the local authorities and General Company must be observed in accordance with the Law on Local Administration. This will be important in ensuring the sustainability of the project once it is completed. There has, to date, also been a lack of coordination between local authorities and the General Company, the latter being the entity responsible for the purification and treatment plant once the project is finished. It is, therefore, important to train the General Company’s technical teams so they can contribute to the project’s sustainability. These teams will also help reduce the plant’s dependence on central government with regards to problems or new parts.

[10] Interview with Ahmed Amjabar, Director of the General Company for Water and Sanitation in Sebha, 10 June 2021.

[11] Interview with Isa al-Salehen, member of the board of directors of the General Company for Water and Sanitation, Sebha, 13 November 2021.

[25] Sada, “Cabinet gives permission to the Board for Transportation, Housing, and Utilities Projects to carry out several new projects,” 12 September 2021, https://bit.ly/3nFAz8M.