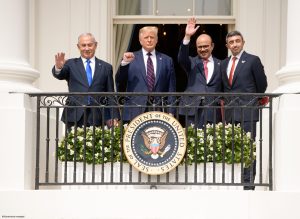 The United Arab Emirates (UAE) and Bahrain signed the Abraham accords peace agreement to normalise relations with Israel last week in Washington. With this agreement, the two countries joined Egypt and Jordan, which signed peace treaties with Israel in 1979 and 1994 respectively. Mauritania also established diplomatic ties with Israel in 1999 but froze relations in 2009 in response to the 2008-9 Gaza war.

In his speech on this occasion, the Israeli prime minister Benjamin Netanyahu claimed, “this is not only a peace between leaders, it’s a peace between peoples – Israelis, Emiratis and Bahrainis are already embracing one another.” Unfortunately, this is not the case. Since Egyptian President Anwar Sadat’s visit to Jerusalem in November 1977 and until last week’s ceremony at the White House, all these peace agreements have only been treaties between political leaders but have failed to establish peace among the people of the region.

Ibrahim Kamel, Egypt’s foreign minister, who joined Sadat in the 1978 Camp David negotiations and resigned in protest against the accords, argued in his book The Lost Peace in Camp David Accords that he was not against establishing peace with Israel but he wanted a just peace that protected Arab rights, and at the heart of it the rights of the Palestinian people. According to Kamel, “The Camp David treaty will not bring peace to the region, but it will rather consolidate chaos and disorder. It gives Begin a free hand in Gaza and the West Bank, and hence will not lead to a solution to the conflict in the region but will aggravate it.” One only needs to replace Camp David with the Abraham accords and Begin with Netanyahu to realise that nothing has changed since then.

Arab attitudes to Israel are often framed between the two extremes: supporting peace with Israel and denying its right to exist. Kamel’s position represents many Arabs in the region, I would say the majority: supporting a peace agreement with Israel, but an agreement that does not compromise Arab rights, in particular the Palestinians’ right to establish an independent state on the land occupied after the 1967 war, with Jerusalem as its capital.

In the same speech last week, Netanyahu insisted that “strength brings peace.” He is right, but strength brings the kind of peace that only involves political regimes. However, peace between the people of the Middle East will only be achieved when Israel realises that it is justice, not strength, that will bring peace to the region. Strength coupled with economic opportunities might be able to convince political leaders to sign a peace treaty with Israel, but it will not bring their societies to embrace it. This is the case in Egypt and Jordan after decades of ‘official’ peace with Israel. Already in Bahrain, civil society groups have issued a joint statement rejecting their government’s decision to normalise ties with Israel. The signatories include the General Federation of Workers’ Trade Unions, the Bahraini Bar Association and the Bahrain Women’s Association.

This peace process, sponsored by the same US administration which decided to transfer its embassy to Jerusalem, is not only another missed opportunity to achieve peace between Arabs and Israelis but it takes many steps away from the right track to achieve this goal. It offers extremist voices in the region another opportunity to confirm their discourse that no just peace is possible with Israel and puts moderate voices who believe in peaceful coexistence between Arabs and Israelis in a weak position to advance their cause.

– Will Covid-19 accelerate the process of reform within Egypt’s Coptic Church?, 19 June 2020