Epidemics, like the many plagues that have struck Europe (for example in 1347 at the start of the Hundred Years War and during the Thirty Years War in 1618-1648), have never ended a war in history, even though sometimes they have played a long-term role by weakening empires or exhausting the fighters.

There are two ways in which the current epidemic could play a role in the present conflicts in the Middle East:

– by inflicting unbearable casualties on the civilian population, which might then oppose any military interventions abroad or push the different sides in a civil war to find an agreement;

– by undermining the military capacities of one or several actors, thus changing the balance of power (e.g. the USS Theodore Roosevelt aircraft carrier was struck by the epidemic in March 2020).

In both cases, the states or movements waging asymmetric warfare are not impacted equally: while both are confronting the same epidemic, the ‘weak’ or ‘junior’ side is in a better position (e.g. Iran vs USA) and civil war actors are less concerned about civilian casualties than the states they are confronting. 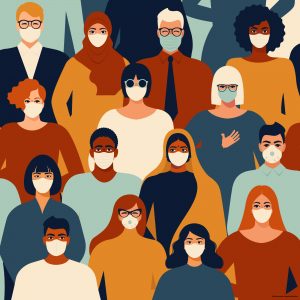 The first effect of the epidemic (the civilian population) depends on the threshold above which losses become unbearable for a country. This is never purely demographic; it is also largely psychological. The Spanish flu that killed so many people in 1918 had no political consequences. In countries which are experiencing a civil war, the psychological impact of an epidemic is low and will remain low independently of the mortality rate because the population has other urgent concerns (Syria, Libya, Yemen).

In other countries, although the actual level of Covid-related mortality is somewhat low, it may have a huge psychological impact, which is multiplied by the population having widespread access to social media. In this context, people may protest against both the failure of governments to control the pandemic and the measures taken to control it (lockdowns) because they lead to sudden impoverishment. The real issue is that the capacity and impact of popular protest is very different depending on the nature of the regime.

Armed groups which are not in charge of a country or a territory may just ignore civilian casualties (Yemen, Syria) even when they pretend to care (Libya), but they come under less pressure than established states. Conversely, Hezbollah considers itself to be in charge of the local population. However, the threshold for civilian casualties to become intolerable greatly varies according to the recent history and nature of the regime. A non-democratic regime can accept more casualties than a democratic one, even if it competes to attract some popularity (Haftar in Libya).

Iran has a history of important civilian losses due to frequent earthquakes, and one might infer a higher level of acceptance. Civil wars have resulted in tens of thousands of deaths here and there (Lebanon, Yemen, Syria, Iraq …). In these cases, the threshold of ‘unbearability’ might be higher. But for how long?  The mid-term (six months to one year) lethality of Covid-19 if not hindered by lockdowns is in fact unknown for the moment and is of course underestimated by rulers who for different reasons cannot impose or maintain an effective lockdown. Therefore, fear of Covid-19 will not impact the foreign policies of the leaders of Iran, Syria, Saudi Arabia, Libya, Turkey and Hezbollah in the short term at least (6 months). The UAE started a re-assessment of its policy in Yemen before the epidemic (but will maintain its support for Haftar in Libya), and its small population, good administration and modern technology make it easier for the state to control the epidemic at home. In Iran, the regime is clearly ready to face tens of thousands of deaths due to the virus and even hundreds of thousands in order to keep the economy running, simply because it has no other choice. Consequently, it will probably continue to wage its low intensity warfare in the Middle East as long as this only involves the Revolutionary Guards and proxies (Shi’a militias).

The second effect is quite simple: complex armies are more susceptible to being crippled by the virus: the examples of the USS Theodor Roosevelt and the Charles De Gaulle show how aircraft carriers can simply be put out of service by the virus, which is not the same for the Iranian Revolutionary Guards’ small speedboats (if 50% of an aircraft carrier crew are sick, the ship has to be stranded; if 50% of the Iranian speedboat crews are sick, 50% of the speedboats are still operational). Even if the US fleet in the Gulf is relatively untouched by the virus, the fact that the US is affected elsewhere will create a real logistical problem (turnover of crews). It is not the numbers of sick military people on the two sides that count, but the sophistication of the military apparatus: the more sophisticated, the more manpower. Drones cannot replace a fleet in the Gulf. In Libya, the Western forces are not involved and will not be.

The conclusion is that in the short term (six months to one year) anti-Western forces (jihadists and Iranians), the Russian forces (not very sophisticated, not numerous and often represented by mercenaries) and the groups fighting in civil wars will not be hindered by the virus, unlike Western forces. In the long term, it will depend on the level of casualties among the civilian populations of countries which do not implement a lockdown because they cannot afford to. In a country like Iran, hundreds of thousands of deaths are probably bearable, but not if the number goes beyond a million.  Consequently, everything depends on the real level of lethality of the virus, or more exactly on the ‘natural’ peak of the pandemic in the absence of enforcement of lockdowns. Nobody knows what this natural peak is. We will learn it in the next months. If it is below the level of ‘acceptable demographic losses’ (for a non-democratic regime) and if the economy survives, the Covid-19 epidemic will not alter the basic geo-strategic tenets in the Middle East.