Why business as usual is no longer an option for Lebanon’s ruling elites?

Lebanese citizens have been on the streets since 17 October to reject widespread corruption and deteriorating socio-economic conditions, thereby renouncing blind obedience and signalling an end to the discourse of fear propagated by the ruling elites. The population, deceived by its politicians, is asking for new and qualified leaders. Politicians’ speeches have clearly shown their disconnection from people’s concerns. The Lebanese economy is in crisis, as it has been for several years, and people now cannot afford their basic needs. The persistence of the protesters seems to have surprised the government, leading to the resignation of Prime Minister Saad Hariri on 29 October. The PM’s resignation, however, has not satisfied citizens’ demands.

While divided amongst themselves, ruling elites appear united against the people. Hariri’s stepping down appears to be a political stunt to get more bargaining power or a tactical move to get rid of some ministers in his government. Other politicians decided to engage in a show of force to maintain the status quo – characterised by weak central government and institutions – in an effort to hijack the revolution, rather than dealing with the root causes of the “hirak.” This has resulted in the political arena being divided into two main camps seeking more power and to settle old scores, both of which are against the protesters. The first camp, represented by Hezbollah and President Michel Aoun, feels betrayed by the PM’s resignation and is aiming to preserve the status quo. The second, the Hariri camp, is trying to gain further power and leverage. Protesters, on the other hand, are calling for good governance and an end to widespread corruption.

The future vs the past. Protesters understand that they are at the centre of a struggle between the past and the future, and that the desired change will not be quick. Since independence, Lebanese national identity has been undermined and fragmented by political leaders along sectarian and party lines. Political clientelism and patronage dictate the sectarian rules of the game. Politicians have focused on survival and their own interests rather than the national interest. The difficult question remains: will the Lebanese protesters be able to accomplish their goals and prompt a new form of post-civil war governance? 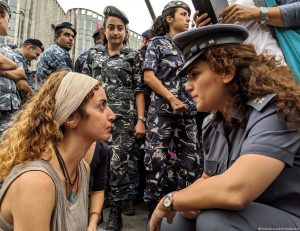 A generational and gender revolution. Lebanese women and youth have been at the forefront of the movement, rejecting sectarian rule, intimidation, oppression and lack of accountability. They have been operating in a decentralised manner with no clear roadmap or leadership. Their “hirak” is likely to endure, in varying forms, gaining more societal support and opening the door to change in the Lebanese political community. Their participation is remarkable for its size and maturity, representing the largest component in protests and sit-ins, and presenting strong arguments against the political system.

Elites should rethink their strategies. Whether they survive this revolution or not, business as usual is no longer an option for Lebanon’s ruling elites. Lebanon could enter unchartered territory and suffer an even deeper long-term political and economic crisis unless politicians find new ways to take on the country’s challenges. Looking at neighbouring states, Lebanese elites should take note that using tactics of oppression could have disastrous consequences for their legitimacy and ultimately their political careers. Delaying or avoiding reforms, and resisting a smooth transition of power could spell disaster for Lebanon, especially if politicians cling to power.

Good governance and national identity. The new government should aim for responsive, transparent, inclusive and pluralistic governance. Citizens want to relinquish the old model of governance and allow for a new and diverse generation of political leadership to emerge. This Lebanese movement could prove to be historic, rallying the population under one flag, enabling a common identity to be finally forged. Even if just for a moment in time.