“Before Corona, I will die of hunger”: The socio-economic impact of Covid-19 on the Syrian population and new challenges for the regime 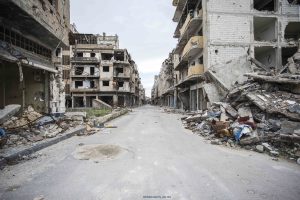 For the Syrian regime, which now controls over 70 per cent of Syrian territory, the Covid-19 virus might represent one of the most significant social crises since the beginning of the war. As more and more of the population is under its domination, Damascus has been clutching at solutions to the increasing challenges with very limited financial resources. At the same time, state infrastructure and its services have already suffered massively from destruction during the war. Combined, these situations have cause various forms of dissent and growing criticism to reappear against the regime in different areas of the country. In mid-January 2020, several demonstrations took place in the province of Sweida to oppose living conditions and the Syrian government’s neglect towards its citizens, while in recent months, protests against the regime have multiplied in the Daraa province and Rural Damascus.

With the first positive Covid-19 case in Syria officially announced on 22 March and the second death recognized by the authorities on 30 March, the potential for widespread diffusion of the virus would be a tragedy for millions in Syria. Years of war have weakened the healthcare system, due to the destruction of many health facilities, a shrinking budget, and sanctions that have left it with significant shortfalls in medicine, medical supplies and staff. Only 64 per cent of hospitals and 52 per cent of primary healthcare centres across Syria were fully functional at the end of 2019, while up to 70 per cent of the healthcare workforce has left the country. According to one study, the maximum number of Covid-19 cases that could be handled adequately in Syria stands at 6,500, and with large variations according to each governorate ranging from 1,920 in Damascus to none in Deir ez-Zor.[1]

The regime has so far adopted opacity and repression to deal with the pandemic. In an attempt to prevent the expansion of the virus in the country,  it has launched sanitary campaigns and imposed limitation measures to public daily life, which are far from sufficient to protect those most in need and in the sections of the workforce that continue their activities in unsafe conditions. Doctors have been banned from commenting on the Covid-19 situation in Syria and the Ministry of Interiorhas threatened citizens with arrest and prosecution if they publish any information about the virus that is considered to be false or fabricated. The government is also obstructing any collaboration with international agencies in the framework of the pandemic and prohibiting the gathering of information on the health sector.

Moreover, Covid-19 will most likely intensify socio-economic problems faced by large sectors of the population, and as a result, represent a new challenge for the Syrian regime that could turn into fresh forms of political dissent. To address the social and economic challenges linked to Covid-19, the government has announced the allocation of 100 billion Syrian pounds without detailing how funds would be distributed. Some of these measures should include a guarantee of continuity in the production process for food and medical industries in the public and private sectors. 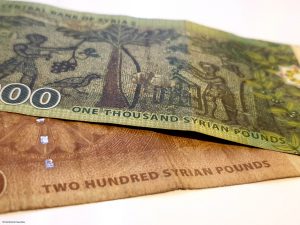 The Central Bank of Syria has also decided to temporarily facilitate the procedures and processes for importers buying foreign currencies in order to ease food and medical supply imports. Other measures taken by the government include the exemption of taxes for restaurant and hotel owners for the months of April and May, in exchange for continuing to pay salaries and the direct distribution of essential products to homes through the Syrian Trade Establishment – a state institution with hundreds of stores selling low-cost food and other products across the country.

While the state has announced various decisions, their implementation is still to be proven, as state institutions have been weakened and state capacity limited. In addition, there is great disparity among the regions in the state’s ability to act through its own institutions and networks, especially in former opposition-held areas that lack state services. Businessmen close to the regime have also launched various highly publicised initiatives in different cities to provide free food, especially bread, and some medical supplies to those in most need.

However, such states measures and charity initiatives by businessmen are insufficient for a country with a poverty level of over 80 per cent. As the economic crisis deepens, the value of the Syrian pound has continued to fall throughout March. Since the first infected case in Syria was announced, the price of medicines and basic foodstuffs have continued to rise on average between 20 and 40 per cent.As public state wages continuously decreased in real value (inflation adjusted) these past few years, state workers have been increasingly pushed to seek second sources of income. In addition, devalued wages have also provoked a rise in bribes or in the amounts that recipients were already obtaining. The Covid-19 crisis will likely prevent or limit the possibilities for these public employees to complement their first income with a second, as wide sectors of the economy have reduced their output or stopped altogether. Added to this, it is said that some private sector companies have announced wage reductions of up to 25 per cent, for the month of April.

Moreover, a high proportion of workers, especially in the informal sector which expanded greatly during the war, depend on daily labouring to survive. According to workers’ economic activity, their single income disappeared or was reduced with no alternatives to sustain their daily expenses. The economic downturn and possible strengthening of containment measures will push these segments of the population further into poverty. With no significant financial compensation expected, no labour means dying from hunger for many of these workers.

A final element to consider is how the global nature of the pandemic negatively affects the international economy as a whole, and hence external funds into Syria. Most notably, this includes remittances, which amounted to around 1.62 billion dollars in 2016, and represent just over 10 per cent of Syria’s GDP. The amount of remittances sent by Syrians living abroad will likely drop due to widespread reductions and stagnation in sectors of the economy and to border closures from Europe through Turkey to the Gulf countries. Given that remittances have become one of the most important sources of national income and helped boost internal consumption, a severe decline in income deriving from remittances will entail grave socio-economic consequences. Many families and communities depend on these funds for daily consumption and everyday expenses.

As state institutions are unable to meet the most basic daily needs of the most vulnerable families, and as sources of income diminish, Syrians are most often contrived to find solutions of their own. Local solidarity initiatives in regime-controlled areas, many of which started on social networks, have flourished in some of the main cities (Damascus, Lattakia, Tartous, Sweida, Hama, Homs, Aleppo, Deraa), to bring assistance to the people most in need. Alongside campaigns by local associations and NGOs to raise awareness and provide means to prevent the virus spreading, groups of independent youth have organised, often through social media, initiatives to secure and deliver food and medicines to those in need, especially the elderly.

The Minister of Social Affairs and Labour welcomed these local initiatives but stated that people should provide aid or donations only through the entities registered with the Ministry. In the case of Lattakia, for example, some local youth initiatives have been repressed by security forces, while in other areas they tend to be co-opted by the SARC or security services. The regime wants to prevent any local private solidarity initiative from developing means of autonomy and expanding its own networks.

Other signs of solidarity have been witnessed, including cases of shop owners offering free food products and landlords announcing they will not claim any rent during the months of March and April. Diaspora individuals and communities have also sent funds to their villages and towns of origin so that those with limited or no income have access to food and medicines.

In conclusion, alongside the obvious sanitary dangers, the Covid-19 crisis poses serious negative socio-economic consequences on the vast majority of the Syrian population. Sources of income are continuously being reduced and the cost of living is increasing, while the Syrian government’s measures to curb the impact are insufficient. At the same time, attempts by local communities and groups to palliate the state’s lack of services and socio-economic answers, though independent initiatives and by creating their own assistance networks, are perceived by the regime as a threat to its own networks and authority.  This situation could exacerbate the social and political discontent against the regime, but the regime might also use this crisis to reassert and consolidate its authority and authoritarianism.