Covid19 in Egypt: Exploiting a pandemic to consolidate authority 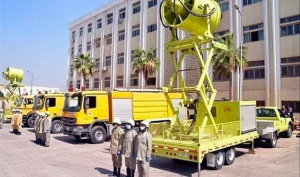 As the Chinese government showcases its success in controlling the pandemic, much media attention has called into question the accuracy of the government-reported official count of coronavirus cases in China. However, beyond the Chinese government’s campaign to downplay the severity of the pandemic in China, the lack of transparency in authoritarian regimes around the world has raised concerns that covering up the actual number of cases can counterproductively hinder efforts to effectively combat the pandemic. In the Middle East, this can be seen in Egypt, where the government has expelled and cracked down on journalists reporting on the pandemic while going so far as to criminalise the questioning of official numbers.

Like most other Middle Eastern countries, Egypt was initially seen as a relative latecomer in getting the coronavirus compared to Europe. However, this image started to unravel when news reports surfaced in Western media in mid-February that tourists who had recently visited Egypt had tested positive on reaching other countries. This was compounded by mid-March when data from infectious disease specialists at the University of Toronto estimated the number of cases in Egypt at 19,000. This revealed a wide disparity with the official number, which as of 22April stood at about 3,500 cases. Given Egypt’s weak health system and limited testing capabilities, this has raised public concerns over the validity of the official numbers.

Fearing the damage to its credibility and the public mistrust that these exposures could cause, the Egyptian government responded by deflecting blame onto foreign nationals while accusing those who challenge official numbers of undermining Egypt’s national reputation. The government has further exploited the pandemic by using its control of the media to signal its strength in maintaining social control and public order by, for example, heavily publicising the disinfection of areas in Cairo by themilitary. With the challenges independent journalists face in investigating the issue and with the limited number of independent mechanisms to verify official data, the true number of cases remains open to question. However, attempts at strategically under-reporting cases while manipulating news coverage to appeal to the public can backfire. This is particularly true in rural villages and slums, where social distancing is not feasible and where the medical infrastructure is lacking, which would severely limit proactive attempts to slow down the spread of the virus.

The Egyptian government’semergency measures, like those of other governments in the region, include a curfew and a prohibition of public gatherings. However, with a third of the population below the poverty line, taking further drastic actions will strain Egypt’s already fragile economy. This leaves the Egyptian government, like many others in the region, in a precarious position. As the crisis continues to unfold, the responses of governments across the region are likely to have major impacts on public perceptions of their effectiveness. However, with their limited room for manoeuvre, the pandemic is set to impose increasingly debilitating burdens on various states across the region, which had already been withering away long before the pandemic.