Delays in Rebuilding Benghazi: The Case of the al-Sabry Neighbourhood

The eastern Libyan city of Benghazi—the second largest in the country—has seen 30 percent of the city destroyed: a consequence of the 2011 revolution and the conflict of 2014-2017.[1] This destruction occurred in strategically-important areas of Benghazi, including the city’s main business and administrative center, as well as surrounding areas such as the al-Sabry and Sidi Ikhribish neighbourhoods. Essential infrastructure and public services in Benghazi have similarly been hit hard, which has led to major disruptions in daily life.

Some residential neighbourhoods in Benghazi were also damaged during the conflict. These included the Bouatni and al-Leithy neighbourhoods in the eastern part of the city, and 40 percent of al-Hawary and Benina neighbourhoods, where the Benina International Airport is located, as well as the so-called Chinese buildings.[2] Most of the houses in these neighbourhoods are in ruins, the streets are full of rubble, and their former inhabitants have fled. This destruction is not limited to residential units, but also includes other aspects of the city’s architectural heritage such as the Ikhribish Lighthouse, al-Manar Palace, and Souq al-Hout. These buildings were an important part of the city’s identity.[3] 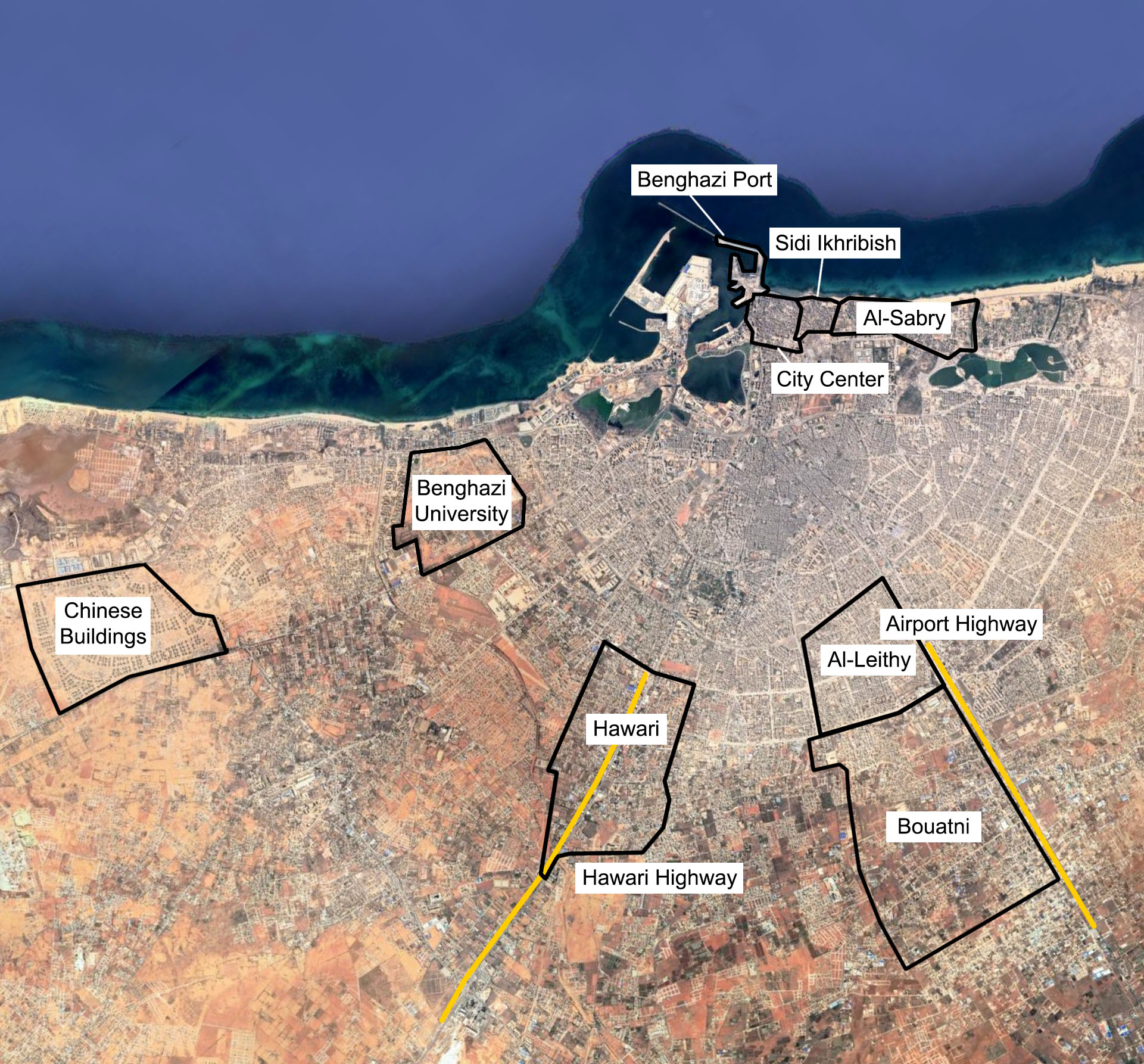 In fact, deteriorating infrastructure has plagued the city for decades; the armed conflict has only exacerbated the situation. Most of Benghazi’s roads and bridges were built in the 1980s, and have since fallen into disrepair, while maintenance efforts have been limited to poor quality resurfacing of roads, as well as the installation of streetlights. In addition, nothing has been done to address problems with lift and pumping stations and the sewage system. These have not undergone any maintenance since 1988.[4] Furthermore, the power plants have been unable to generate enough electricity for the city’s needs since they have not undergone necessary maintenance either. Given the lack of public utilities and services, residents have been forced to shoulder the burden of meeting basic needs on their own.

How badly damaged is the al-Sabry neighbourhood?

The al-Sabry neighbourhood is one of the most densely populated areas in Benghazi and its infrastructure was particularly damaged in the armed conflict. This working-class neighbourhood has a long and illustrious history: it was one of the first quarters of Benghazi, and most of the streets were named after the families that originally lived there. Al-Sabry has also been a site of strategic importance since it is located near the city center and covers some five kilometres of the waterfront.

Al-Sabry has not changed significantly since the armed conflict ended. The aftermath of the conflict continues to negatively affect the neighbourhood, and many buildings remain in ruins. There have not been any serious reconstruction projects on the bridges leading to the area: these were also destroyed and need to be rebuilt according to bridge construction standards. Instead, only small-scale maintenance projects have been carried out: for instance, hole-filling and the resurfacing of roads.[5] The sewage works have been neglected, with rainwater pooling in the streets, as drain off is poor. The roads have fallen into disrepair and are full of potholes and sinkholes and some of the inner streets have been closed off entirely. Additionally, the electricity grid in the area works only intermittently and telecommunications have been cut off as a result of the conflict.[6]

After the conflict started up in 2014, approximately 6,320 families fled the area.[7] Some families returned after the Libyan Arab Armed Forces retook and stabilised the neighbourhood in June 2017.[8] Others never returned, as their homes had either been completely destroyed, or they did not feel safe returning when neighbouring areas remained empty.[9]

Following the period of the armed conflict, al-Sabry experienced demographic change for two reasons. First, some residents sold their houses and left the neighbourhood[10] in order to afford rent elsewhere in the city, leading to different families moving to al-Sabry. Second, some of the original residents gradually returned to the neighbourhood after having lived in other areas for years. Due to these factors, there were changes in the social fabric. Al-Sabry had previously been home to many long-term residents and was distinguished by the close social ties between families. However, these links are lacking between the new residents, and consequently the inhabitants of the neighbourhood now have different social values.[11] As a result, residents have had a hard time adjusting to life in al-Sabry as they have waited for reconstruction efforts to alleviate the situation.

How did the government approach the rebuilding process?

In 2016, the interim government, led by Abdullah al-Thani, established the Reconstruction Fund for the city without providing, though, a set budget. The goal of the fund was to repair damaged areas of the city and to finish projects underway, but it did not achieve any tangible results.[12] On 6 May 2021, the Cabinet of the Government of National Unity issued Resolution No. 45, which set up a Reconstruction Fund for the cities of Benghazi and Derna and which allocated 1.5 billion Libyan dinars to the effort. The resolution affirmed the financial and legal independence of the fund as an entity headquartered in the city of Benghazi. However, the fund lacked effective mechanisms for carrying out the reconstruction process.[13]

The future of reconstruction in Benghazi remains unclear. The agencies responsible for the process still lack a clear vision for development,[14] and have not taken into account the prerequisites for the sustainable planning of the city.[15] Stalled contracts have also created roadblocks in reconstruction. Contracts have stalled for a variety of reasons, including the fluctuating value of currency, the lack of security and stability, and the fact that the value of these contracts exceeded that of the set budget. As of now, there have only been limited compensation payments for damages and displacement issued to families and households, and repairs of damaged buildings such as schools, clinics, and public utilities.[16]

Al-Sabry residents have been forced to search for alternatives to formal reconstruction. After the end of the fighting in 2017, residents embarked on three phases of efforts to try to restore normal life. The first phase aimed at repairing the overflowing sewage system. Here they drew upon the assistance of experts to get the wastewater lift station working again. This resulted in the successful week-long drainage of sewage water. There were also water contamination tests, and inspections of damaged houses to ensure the safe return of residents. Children and elderly residents were prohibited from returning until the streets were disinfected by firetrucks, and here residents and experts worked together with special agreements.[17]

In the second phase, residents focused their attention on cleaning up the debris from war damage. They pooled their resources and tools and worked, too, to fix and temporarily resurface streets. However, due to the density of the quarter, they ran into problems with clearing and defusing landmines in the area, a process which was overseen by military engineers. Some residents prematurely returned to their homes without waiting for the demining process to be completed, and there were casualties after some buildings exploded.[18] The third and final phase relied on specialists from among the residents who made efforts to restore electricity to the area, prior to seeking support from the General Electricity Company.

Despite the challenges posed by the lack of general security, the collapse of the power grid, and leaking sewers, some residents have been able to improve conditions in al-Sabry, return to their homes, and resume a somewhat normal life. However, challenges persist. There has been a lack of public services in the area, such as schools and markets, as well as a lack of security especially at night, thanks to the largely deserted areas next to the neighborhood.

The city of Benghazi is a political and administrative hub in eastern Libya that links together other coastal cities in the country, including Bayda in the east and Sirte in the west. The residents of nearby suburbs rely on the public services Benghazi provides. These include healthcare and education. However, in recent years the city has been ravaged by the armed conflict, which has destroyed most of its historic buildings as well as its administrative complexes. Furthermore, the city has grown beyond its capacity. There are now too many residents, which has affected the services available and resulted in an increase in informal building.

The central government continues to prove ineffective in dealing with the situation on the ground. There has been project funding allocated without comprehensive planning, so that projects end up not being carried out. The municipality has a better grasp of residents’ needs and, therefore, serves as the point of contact between the central government and the people.[19] There is a need for improved cooperation between central and local government via agencies that play a key role in the reconstruction process. These include the Ministry of Housing and Utilities, the Urban Planning Authority, and the Libyan National Centre for Standardization and Metrology. This would contribute to a strategic plan that could: address reconstruction priorities; involve residents in the reconstruction process; provide compensation for damages; and develop property regulations.

[1] Interview with a member of the Housing and Utilities Commission, 27 September 2021

[9] Interview with one of the residents of the al-Sabry neighbourhood on residents returning after the armed conflict, 22 February 2022

[11] Interview with one of the residents of the al-Sabry neighbourhood, 17 February 2022

[14] Interview with a former member of the Office of State Property who had been involved in the Economic Working Group for the reconstruction process, 17 October 2021

[15] Interview with a former member of the Office of State Property, 4 December 2021

[16] With regard to prerequisites for the reconstruction process: “A successful reconstruction process is characterized by effective statebuilding and a long-term, sustainable, and balanced economic recovery.” Amr Adly, Muhammad Alaraby, and Ibrahim Awad, “Conflict by Other Means: Postwar Reconstruction in Arab States,” Malcolm H. Kerr Carnegie Middle East Center, 24 February 2021, https://bit.ly/3MVfmCI

[17] Interview with a resident of al-Sabry neighbourhood on residents returning, 22 February 2022

[19] Interview with a member of the Economic Working Group of the United Nations Support Mission in Libya, 4 December 2021