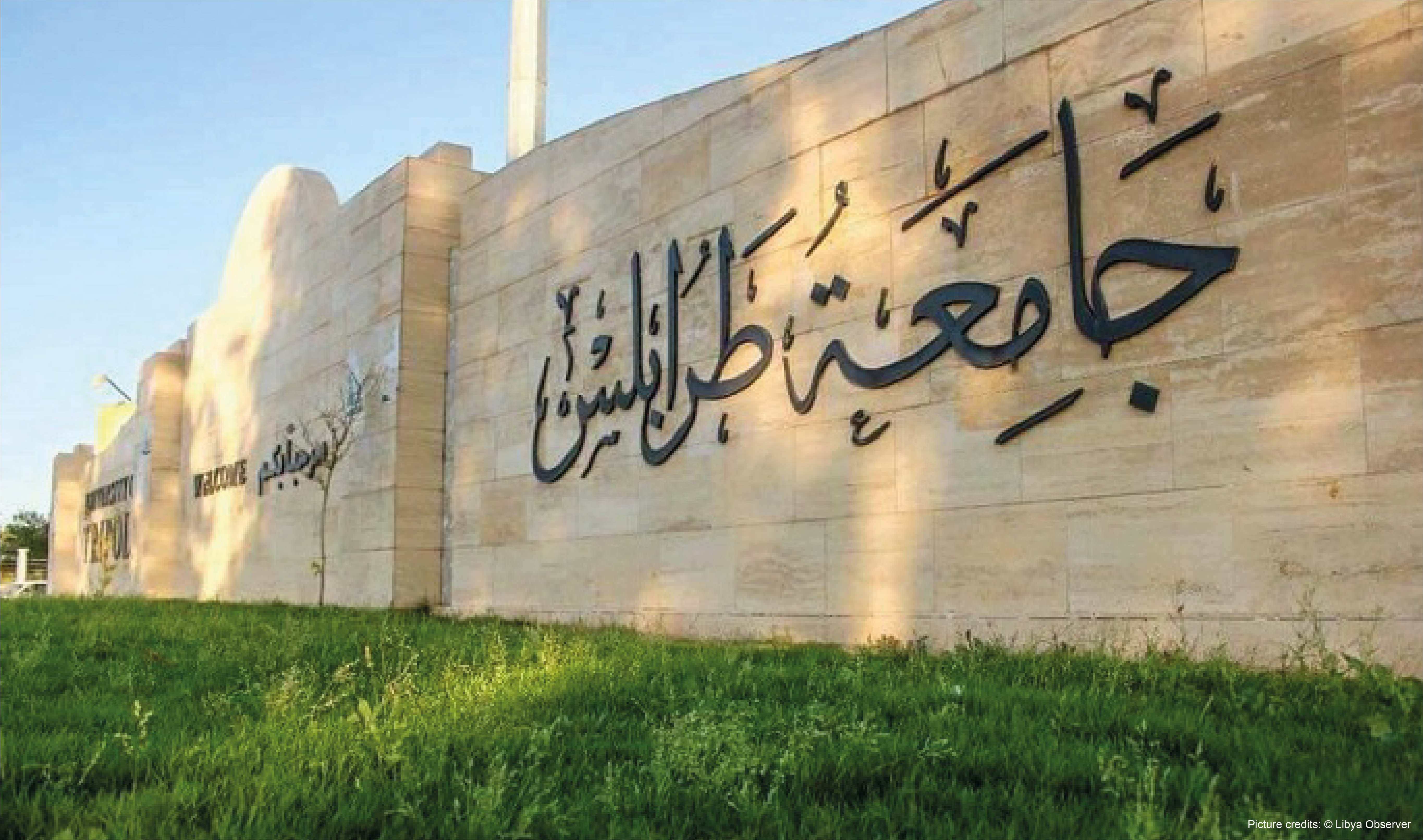 Libya’s higher education sector has suffered from various crises since the 2011 revolution, particularly during the past several years of war, as a result of the deteriorating security situation. One of the most significant crises has been the horizonal expansion of universities without any attention to quality standards, a phenomenon which has reduced the quality of higher education in the country. The number of public universities in Libya grew from 13 in 2014 to 26 in 2021.[1]

Despite the substantial increase in Libya’s youth population during the last decade, the proliferation of universities remains unjustified. Out of Libya’s total population of 6,871,286,[2][3] youth currently make up 56.78 percent.[4] In fact, young people between the ages of 15 and 34—the age group targeted by all levels of higher education—make up 24.25 percent of the population. [5] In other words, there are 1.5 million young people within this age bracket, but there are currently only 350,000 university students in Libya.[6] Based on these statistics, we can say that there is no correlation between the proliferation of universities in Libya and the demographic distribution of these age groups.

This proliferation of universities has led to various problems. Some of these problems and been most recently highlighted by the Government of National Unity’s most recent attempt to bring back study abroad initiatives, which had been suspended since 2014 because of the political divide in the country and the limited funds allocated for overseas study programmes.

On 13 August 2021, the Ministry of Higher Education and Scientific Research announced that it would reinstitute study abroad programmes, which had been an important part of education policy in Libya, and which targeted faculty, teaching assistants, and other university personnel.[7] The ministry began to implement the resolutions on 25 August. It announced that it would generate a list of all candidates from among faculty members, teaching assistants, and personnel at public universities, but encountered two main challenges. First, the database of candidates was incomplete and therefore, made it difficult to implement these resolutions.[8][9] The process also suffered from mismanagement by the ministry’s Department of University Affairs and Department of Cultural Missions, which both coordinated poorly among themselves.[10] To address this issue, the ministry established a new database for all of the candidates’ information and completed it by 7 September.[11] The second challenge that arose, however, was the sheer number of candidates—a total of 50,000 persons from around the country[12]—which resulted in higher costs, although the national budget had not yet been approved.[13]

As a result, at the end of September 2021, the study abroad programmes were unofficially suspended again, which immediately triggered pushback from academic circles. The General Syndicate of University Faculty Members announced a strike protesting the suspension of these programmes on 7 October.[14] On 10 October, teaching was halted at all universities.[15] In addition, the syndicate threatened to undermine the full academic year[16] and demanded the implementation of Resolution No. 126 on increasing salaries, in order to secure the financial and educational benefits for faculty members included in this resolution.[17] The government responded quickly: The Ministry of Higher Education and Scientific Research began to implement the national programme for domestic studies, which would offer to humanities students the opportunities to study in other Libyan universities.[18] The ministry clarified that study abroad programmes would be limited to very few fields of study which are not offered in Libya.[19] [20] In response to the strike, the government announced on 11 November  that it would implement Resolution No. 126,[21] thereby bringing the faculty strike to an end on 21 November.[22]

What are the factors driving the proliferation of universities?

This episode, partially caused and impacted by the increase in the number of universities, poses the question as to what the main reasons are for this increase. Poor planning and implementation of plans, since 2014,[23] have been main factors, as there are still currently no strategic plans to steer the higher education sector in Libya.[24] Although the National Planning Council is the designated body for creating comprehensive plans for the country, it has not released any plans pertaining to higher education. Meanwhile, the Ministry of Education, working under various successive governments, has continued to adopt strategic plans that have never been fully implemented.[25] This has been due to the lack of coordination between successive ministries.[26] Instead, each ministry tries to formulate a new plan without ever beginning to implement it. Then, these plans are set aside whenever a new minister comes into office.[27] Additionally, no limit has been placed on the rising number of universities. This has been further compounded by the legal and legislative disorder in the sector with regard to decisions to merge or split universities, further contributing to the proliferation of public universities.

Furthermore, the proliferation of public universities is tied to various social, political, and security-related factors. After armed conflict broke out in Libya in 2014, certain regions tried to establish their own universities in order to allow some of their residents to continue their education. This took place following the occurrence of identity-based kidnapping, torture, or even deaths in neighboring regions.[28] There were also repeated attacks against members of university teaching faculties.[29] [30] [31]

On the political level, the divide at the national level also spurred an increase in the number of universities as a kind of political maneuver, particularly after the two parallel governments—the Government of National Accord (GNA) and the interim government—were established. For example, the GNA established Ajdabiya University in 2016, while the interim government established al-Jafara University in the same year. Each hoped to extend their influence in areas outside their current control and to gain support in those areas.

The proliferation of universities was also linked to social factors, such as the involvement of regional and tribal groups, which have played an important role in this sphere. The Council of Murzuq Elders in southern Libya were involved in establishing various colleges within Murzuq University in 2021, while the Elders of al-Shgega set up a college of education within the University of Gharyan in the same year.[32] [33]

Another factor contributing to the increase of public universities in Libya is the mismanagement of human resources. This occurs in hiring processes within universities: Some universities were established in order to employ local residents, as a way to address the problem of rising unemployment after 2011.[34] [35] [36] For instance, there were 1,463 employment contracts signed at the University of al-Zaytuna without any justified basis for doing so.[37] This led to an increasing number of unskilled employees, who lacked appropriate training in management or education, to the extent that some university presidents were being appointed even though they lacked a basic grasp of administrative skills.[38] These hiring practices included university faculty, who were likewise appointed without consideration to quality standards, in order to fill gaps in certain departments, especially in newly-established universities.[39]

The mismanagement of financial resources also played a role in this increase, as corruption has become increasingly rampant. The newly-established universities were an easy target for embezzlement and theft, despite the existence of a financial oversight body—the Audit Bureau—which has proved ineffective.[40] In the bureau’s 2021 report, it stated that embezzlement of the salaries of teaching faculty had been a problem at al-Mergib University,[41] in addition to the sale of assets belonging to the University of Tripoli.[42] These universities’ expenditures were therefore disproportionately large, however did not reflect any tangible improvements for the universities. According to the bureau’s report on Sabratha University, 120,000 Libyan dinars were disbursed to “rent a car for one year,” and 33,000 dinars for “rental accommodation,” and yet no such rental contracts were found.[43]

The study abroad programme crisis made clear that the higher education sector is suffering from various problems. It is presently dealing with challenges in adequately implementing quality standards, which leads to poor curricula, lower quality of education, and increasing numbers of students and faculty. The sector is similarly struggling with a lack of appropriate educational infrastructure as well as administrative difficulties.

As a result, the deteriorating quality of education has produced a higher number of graduates who are not qualified to enter local or international work environments. This means that unemployment will continue to rise among university graduates. The sector has thus far proceeded without clear and focused planning or genuine development, which will lead to a lack of alignment between the graduates and the demands of local and international job markets. The mismanagement of financial resources in this sector is also expected to produce high rates of corruption within universities in general.

[3] This population data has some degree of uncertainty.

[6] Speech given by the Minister of Higher Education and Scientific Research, 24 October 2021.

[8] Interview with a professor at Sabratha University, 29 September 2021.

[9] Interview with a professor at the University of Tripoli, 7 October 2021.

[10] Interview with a professor at Sabratha University, 29 September 2021.

[13] Speech by Minister of Higher Education and Scientific Research, 24 October 2021.

[14] Pulse of Libya, “Breaking: General Secretariat of the Syndicate of University Faculty Members for institutions of higher education . . .” 7 November 2021, https://bit.ly/3IdsFem

[19] The eligible fields of specialisation include certain fields of medicine such as neurosurgery, cardiac surgery, blood vessels, and tumors.

[23] Interview with a professor at the University of Tripoli, 7 October 2021.

[26] Interview with a professor at the University of Tripoli, 7 October 2021.

[27] Interview with a professor at the University of Azzaytuna.

[32] Interview with member of the founding committee of Sabratha University, 14 April 2021.

[33] Interview with a professor at the University of Tripoli, 7 October 2021.

[35] Interview with a professor at Sabratha University, 29 September 2021.

[36] Interview with a professor at the University of Tripoli, 7 October 2021.

[38] Interview with a professor at Sabratha University, 29 September 2021.

[39] Interview with a professor at the University of Tripoli, 7 October 2021.