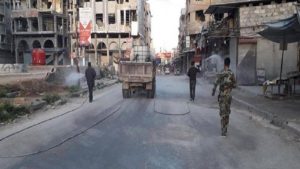 Since recapturing Eastern Ghouta, the Syrian regime has worked with its security agencies to govern its towns. Given the fragility of state institutions after nine years of war, the Covid-19 outbreak may be one of the biggest challenges the regime faces today, especially in areas recently retaken. As the pandemic spreads with 44 cases confirmed in the country at the beginning of May 2020,[1] Damascus has taken strict precautionary measures in an attempt to contain the outbreak.

Through a series of directives issued by the Ministry of Interior Affairs, a curfew was imposed between Damascus and its countryside on 27 March 2020.[2]It did not encompass all the Syrian regions, however, and was instead limited to areas recently retaken by the regime such as Eastern Ghouta. At the beginning of April, the Ministry of Health announced cases of infection in Douma, Harasta, Saqba and Hamouriyeh in Eastern Ghouta.[3]

The manner in which government measures have been implemented in Eastern Ghouta appears to be less precautionary and more security-oriented. Along with increasing statements on the spread of Covid-19 in recently captured areas, the Syrian regime has expanded the presence of Baath Party teams to strengthen its authority in these areas.

The inadequate health system in Eastern Ghouta is scarcely capable of handling the Covid-19 pandemic. The area lacks medical supplies and personnel, and 70% of its infrastructure was destroyed during the conflict,[4]including medical centres targeted by the regime. Despite statements from the authorities about meeting essential needs, in reality there are no effective medical centres in Eastern Ghouta. The medical services that do exist are limited to modest clinics with equally modest capabilities. The few remaining medical staff in Ghouta are still managing to care for suspected cases and provide guidelines to prevent the spread of the virus. However, the overall lack of medical expertise is causing panic among residents, who are aware that medical centres will not be available in the event of an outbreak and are even sometimes afraid their cases will be reported by medical personnel to the security authorities.

At the same time, the curfew has caused losses of income and employment for many residents of Eastern Ghouta due to the inability of most to access their workplaces.[5]Fines for violations of the curfew range from 50,000 to 300,000 Syrian pounds and 3-6 months of imprisonment.[6]As the pandemic coincided with low import volumes, on 30 March the Ministry of Trade and Consumer Protection raised the prices of goods in markets,[7]including the majority of basic goods, which it then worked to regulate. With the start of Ramadan, commercial, professional and service-based businesses are permitted to operate one or two days a week from 8 a.m. to 3 p.m.

To many inhabitants, simply procuring basic goods and paying the rent have become insurmountable challenges, while the regime continues to tell people to stay in their homes to stop the virus spreading further. That these homes were mostly destroyed in the war means that there are great concerns among the population about their living conditions, their lack of basic services, and the inadequate assistance resulting from the suspension of most humanitarian aid work. Today, the aid work in Eastern Ghouta is limited to initiatives by the Syrian Arab Red Crescent and teams affiliated with the Baath Party and the municipalities.[8]

Most of the area’s residents are also in poor physical conditions with weak immune systems due to their low incomes and food security levels, the prevalence of abject poverty after the war and the numbers of war wounds, chronic diseases and disabilities across all age demographics. This poses further risks and challenges to the containment of the pandemic, although the Ghouta residents continue to adhere to the preventative health guidelines concerning Covid-19.

The spread of the virus in Eastern Ghouta is attributable to two members of the regime forces stationed in Douma who had recently returned from northern Syria. As for the infections in Saqba, Harasta and Hamouriyeh, they originated with families who had returned from Lebanon. After the outbreak, entire families were quarantined inside their homes and only allowed to leave after obtaining security permits. Other quarantine measures were also imposed on the neighbourhoods in which affected families lived. The reason the pandemic is still spreading despite all these measures is that the military airports inside Syria still receive Iranian militants and military shipments, especially in the Qalamoun region, which is witnessing movements of Iranian militias and Lebanese Hezbollah between Lebanon and Syria.[9]It is likely that the Covid-19 cases in Syria were the result of contact between members of the Syrian regime and Iranian militias, especially considering that the Iranian authorities have reported infections among Iranians who have returned from Syria. Furthermore, medical sources report that members of the Fourth Armoured Division have been transferred to al-Qutayfah National Hospital in rural Damascus due to Coronavirus infections.

Dealing with the Outbreak in Eastern Ghouta: Regime Security Measures and Networks

With the announcement of cases of Covid-19, the regime reinstalled many of its security checkpoints in Eastern Ghouta and blocked side roads to separate towns with barricades. There are fears that the Syrian regime will completely close off these towns, especially as it has already closed off towns in southern Ghouta.

Using the broad decision-making powers of the security agencies, the Fourth Division made an informal decision in early February to stop allowing medicines and medical supplies into Douma through the Harasta Hospital checkpoint, which is Douma’s only crossing to the capital Damascus. This caused a shortage of medicine in the towns of Eastern Ghouta. On 22 March, the Fourth Division also made another informal decision to prevent the entry of fuel into the city through the same checkpoint, prompting many residents to shut down fuel-dependent businesses. The decision also impacted access to electricity since the population relies on electric generators to power homes.

Similar measures were taken regarding the Douma-Mesraba checkpoint, and State Security began arresting workers in the commercial sector in the city of Douma for the purpose of military conscription.Meanwhile, soldiers at checkpoints began patrolling the towns and imposing fines on residents violating the curfew amounting to 50,000 Syrian pounds a head in exchange for their release.With traffic congestion resulting in part from the many checkpoints and inspection points, many residents are forced to return home late, which further raises their concerns about arrests and fines. It is likely that the Syrian regime is working to deprive Eastern Ghouta of basic requirements in the face of the pandemic and imposing security decisions through the security agencies.

In addition, the regime has benefitted from the presence of the Baath Party in Eastern Ghouta. The Party, under the supervision of the Central Command, has launched an initiative aiming to contain the outbreak together with activities facilitating access to food and basic goods, working to mobilise Baath loyalists and affiliates. So-called Baath Volunteer Teams have been formed under the supervision of the Party leadership in each town. Alongside the Red Crescent they have contributed to the decontamination of public facilities, streets, schools and mosques in Ghouta. At the same time, the Baath leadership has worked on forming neighbourhood committees comprising eight members in order to help local mukhtars and municipalities with distributing bread and controlling its distribution among the population. Through such measures, it appears that the Baath Party has benefitted once again from the pandemic, rallying support and promoting its role in strengthening the regime’s authority in Syria, as the Party is now involved both in the management of resources and community work aimed at curbing the spread of the virus.[10]

The Syrian government was quick to adopt measures to contain the outbreak, although it is clear in general that most of them were aimed at strengthening the role of the regime’s networks in reinstating control over the recently regained areas. As such, the regime’s primary pursuit appears to be to dispel any threat to the capital Damascus which could result in popular outrage or protests by those already facing worsening living and service conditions.

The current crisis in Syria resulting from the Covid-19 pandemic varies across socioeconomic levels, and especially income levels. The residents of Eastern Ghouta have suffered great losses to their livelihoods. The regime has so far failed to address the deteriorating health situation, taking more security actions than precautionary public health measures. It has turned to its networks of trust and loyalty, employing them in its prevention campaigns and settling its relationship with communities rather than allowing civil organisations to work alongside the Ministry of Health and contain the spread of the virus. This, together with the absence of oversight, the continuing deterioration and lack of services in Eastern Ghouta and the failure to find alternatives to meet socioeconomic and medical needs exacerbating the social, economic and political situation, may add further to the human losses attributable to the pandemic. Moreover, the Coronavirus outbreak in Syria may lead to an increase in authoritarian practices and repression, further promoting the role of the regime’s networks in consolidating the regime’s authority over areas it has retaken in recent years.

[5]Movements are allowed on Mondays and Tuesdays and there is a curfew from 6 p.m. to 6 a.m. on weekdays, starting at midday on weekends. With the start of Ramadan on 23 April, the curfew was adjusted to 7.30 p.m. until 6 a.m.SANA, “The Corona virus action team has decided to amend curfew times imposed in all governorates from the beginning of the holy month of Ramadan” (in Arabic), 18 April 2020, https://bit.ly/2SuN9YJ

[7]Comparison of the price bulletins issued by the Ministry of Trade and Consumer Protectionin February and March 2020.

[8]Interview via Skype with an activist and humanitarian worker, 20 April 2020.

[10]Interview via Skype with an activist and former journalist, 22 April 2020.

* Ninar al-Ra’i is a Syrian researcher for the Wartime and Post-Conflict in Syria project of the Middle East Directions Programme at the Robert Schuman Centre for Advanced Studies at the European University Institute in Florence. Since 2012, her work has focused on the humanitarian situation and social and humanitarian developments in Syria.

This policy brief was translated into English by Alex Rowell.