Hirak is not “back”: Algeria’s process of revolution never stopped

Place de le République, Paris, 21 February 2021. As they have done every Sunday in the last year, Algerians and French-Algerians gathered in solidarity of the Hirak Movement in the French capital. Last Sunday, however, was different from the others. Among the many Algerian and Amazigh flags there were several banners recalling  with renewed emphasis the names and symbols of a revolutionary process. A banner standing out in the crowd proclaimed: ‘Revolution, not Celebration’, in support of an anti-regime struggle started in Algeria exactly two years ago. 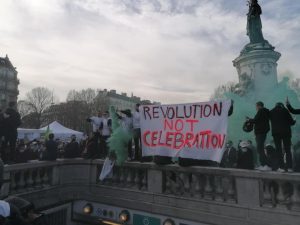 Paris, 21 February 2021 (retrieved from the FB page of the activist Mehdi Brahimi)

In Algeria, on  February 22 2019 thousands of people took the streets in several cities to protest against the former president Abdelaziz Bouteflika’s decision to run for a fifth term in office. Even after  he stepped down under pressure, the Hirak continued to mobilise against the ‘corrupted clique’ of generals, businessmen and ruling party politicians that has for years surrounded the country’s leader, and who are still in power under the contested new presidency of Abdelmadjid Tebboune. Since the outbreak of COVID-19, Algerian national authorities have exploited rules set to constrain the pandemic in order to ban demonstrations such as this one. Yet these obstacles  did not represent a setback for protesters;  a wave of cyber warfare started on social media networks, with activists running new campaigns. Authorities reacted by extending repression to the digital space,  shutting down websites, Facebook pages and Twitter accounts.  Both protesters and their opponents fought online by creating new virtual spaces of contention, each side accusing the other of creating  internet trolls, fake news, fake information and  fake accounts with aims to slander and discredit. Digital media has thus became the battleground of an unstoppable revolutionary process which is also kept alive by Algerians activists outside the country. Indeed, the diaspora – whose most numerous representatives are in France – has evolved as a mirror of the Algerian Hirak. The movement that first erupted in February 2019 has sparked unprecedented enthusiasm, mobilising up to 30,000 Algerians on Sundays in Paris.

The diaspora has had the important role of giving continuity to Algerian demands ‘when the regime took advantage of the pandemic to pressure and  repress people and to make arbitrary arrests’, claims Faïza Menaï, co-founder of the collective ‘Debout l’Algérie’. The Initiative Nida 22, launched last October 2020, for instance, took place on a Zoom meeting among a group of activists aiming at achieving a consensual strategy for future actions which would reflect the demands of the Movement. 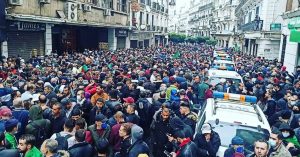 Algiers, 22 February 2021 (retrieved from the FB page of the activist Anis Alkama)

On 22 February 2021, the day after the mobilisation in Paris, the capital and the main cities were invaded again by crowds people keen to bring back to the streets the revolutionary process that, in fact, has never truly ceased.  Two years after the outbreak of the ‘Algerian Spring’, protesters again filled the streets in Algiers, Constantine, Oran, Jijel, Tlemcen, Tizi-Ouzou, Béjaia, Bouira, Kherrata and Sétif. Media from all over the world celebrate these mobilisations as the resurgence of the Movement after a stalemate of one year. And, although the street has an important symbolic value, the revolutionary process has not stopped with the prohibition of protesting in public places , as noted. These online  mobilisations too have a history: they do not appear out of nowhere. The Hirak movement has been fueled over the past year by transnational collective actions carried out online across the two shores of the Mediterranean. It has been kept alive thanks to the tireless effort of  hundreds of activists who have patiently worked out of the spotlight, strengthening today’s mobilisations for a new Algeria.