Just fall, that is all – the latest stage in the Sudanese uprising 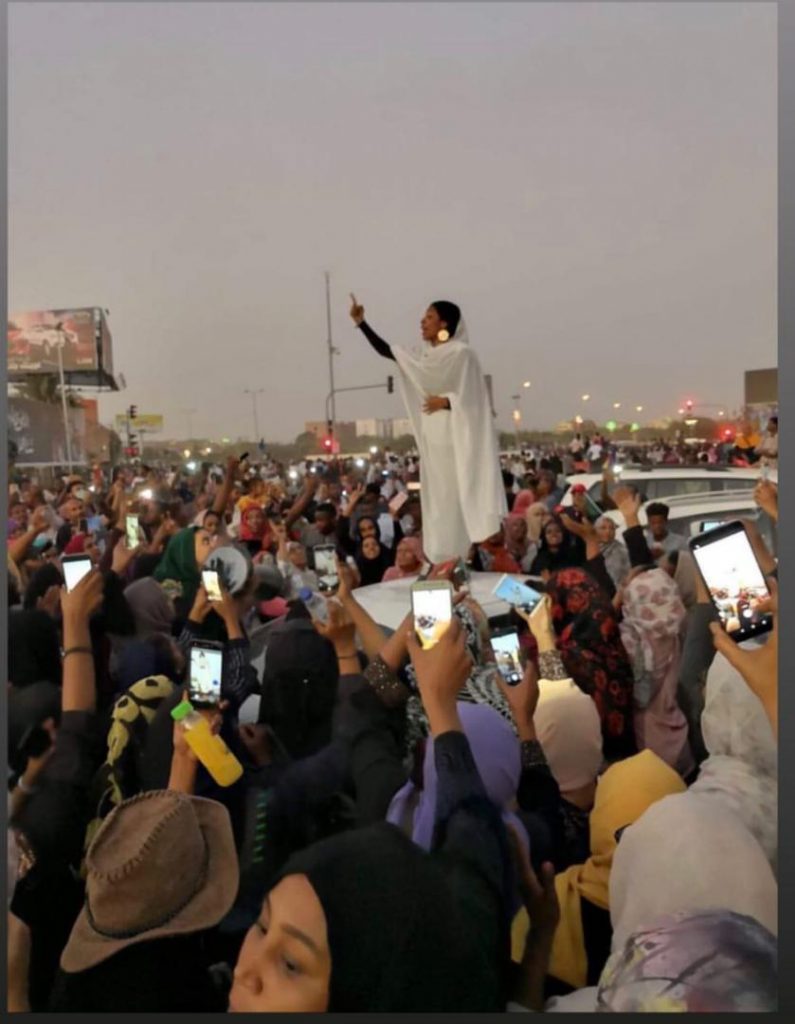 Since mid-December demonstrations on the streets of Sudan have been held against the present regime and its poor management of the country’s economic and natural resources. For months the Sudanese have experienced food shortages, increasing inflation and declining access to fuel, and after 30 years of President Omar Hassan al-Bashir’s rule they are now calling for him to step down. Starting in the notoriously anti-government city of Atbarra, the protests spread around the country, uniting the Sudanese against the toppling of the regime. “Just fall, that is all” has become the mantra of the demonstrations which have continued to take place on a weekly basis. Behind the scenes the Sudanese Professional Association has coordinated the protests, calling for protestors to congregate around certain areas and to follow certain routes to protest on the ground. The widespread, peaceful and diffused nature of the protests has been difficult to control despite the brutal tactics employed by the regime. Importantly, the cultural components of the demonstrations should not be downplayed as they have been used as a tool to distance Sudanese identity from the rest of the Arab world through the embracing of its African roots.

In February, Bashir declared a state of emergency, infuriating the protestors and giving further impetus to confrontation. Phrased as a concession, Bashir declared that he would delay amendments to the constitution which would enable him to run in 2020. In 2013 and 2015, similar tactics were used by Bashir. Interestingly, prior to the speech intelligence chief, Salah Gosh, informed the media that Bashir would resign as head of the ruling party. Instead, Bashir appointed members of the military in the highest governmental positions around the country.

The Sudanese, unaffected by this, planned a ‘Millions March’ last week. In light of this, several US Senators, including Marco Rubio, Ted Cruz and Cory A. Book, have signed a letter expressing concerns over the crackdown on anti-regime demonstrations. On Saturday the 6th – 34 years to the day after similar protests ousted President Nimeiry – thousands of Sudanese peacefully demonstrated in front of the military headquarters in central Khartoum and have remained there at the time of writing. The sheer size of the support for this protest movement is pressuring sections of the military and armed/security forces to choose sides. The army, present at the headquarters during the Saturday and Sunday protests, helped facilitate the demonstrations, resulting in several chants of “The Army is with Us” and “Sudan is rising, the army is rising”, with many protestors having spent the night there. The European Union reported that an unprecedented number of people had come out.

On Monday the 8th, in the early morning, reports of crossfire circulated in Sudanese social media circles. Determined to end the sit-in, members of the security forces (NISS) and the notorious Rapid Support Forces converged on the protestors in front of the army HQ and attempted to disperse them. Protecting the protestors and refusing the above forces entry, the army intervened. When the NISS and RSF started to fire live bullets, the navy and the air force retaliated to protect the demonstrators, resulting in the withdrawal of the NISS and RSF. Later that morning, they returned and the army continued to hold their position.

Many are asking who gave these orders and where the military currently stands. It seems that military units surrounding the military headquarters have sided with the demonstrators as a video circulated of one of the officers stating he went against orders. This could be a dangerous scenario as it raises questions on where military units further away stand and also suggests a split in the army. Sudan’s fragmented security structure consists of three different – but large – bodies: the military, the Rapid Support Forces and members of the security/intelligence services (the NISS). Today, the demonstrators are calling for the military to decide on where they stand. Despite having no overarching leadership, the Sudanese are mobilizing among themselves to provide a sustained sit-in at the army headquarters in Khartoum by establishing medical aid points and distributing food and water. They are preparing for a sustained sit-in in front of the military headquarters. Sudanese First Vice-President and Defense Minister Awab Ibn Ouf announced that the army and security services were collaborating together and maintained the same stance towards the protestors.

On Tuesday morning a repeat of the events of the previous day occurred, as the military repelled an attack by the security services and Islamic militia. The army opened the doors of its headquarters to protect the protestors as they sought refuge from the crossfire. The Troika released a statement urging Sudan towards a peaceful transition and to stop the use of violence against peaceful protestors – the death toll since Saturday currently stands at 21, five soldiers included. The Sudanese Professional Association released a memo asking for international assistance. The above picture circulated throughout social media circles, acting as a defiant message to the regime, singing “thawra” (revolution). This is part of an old tradition of women leading demonstrations in Sudan. During Tuesday night to Wednesday morning, the sit-inners in Khartoum experienced their first night without attempts by the security forces to dislodge the protestors. Reports are circulating that higher-ranking officers have begun to appear alongside the demonstrators.

Across the region other questions pertaining to regime responses to domestic contestation are being raised. For instance, in Algeria, the resignation of Bouteflika was undertaken to satisfy the demands of the population. A trend may be starting to appear in the modes and strategies of government contestation which may have direct implications for the status of security, as the nature of political contestation by the masses has taken less violent and more protracted/prolonged forms, hinting at different modes of political mobilization. Questions are also being raised about whether the West is doing enough to aid those on the ground, beyond criticising the acts of force used by governments. Is this a great departure from the stance the West once had in relation to the Arab Spring or will we see greater interest in the plight of those on the ground calling for democratic change? Could the isolationist policies of Bashir’s entire tenure be prolonging his regime’s life expectancy? Does the departure from Arab ideals explain the lack of interest from the Arab world? What sort of backlash by pro-Bashir supporters and security forces can we expect in Sudan?