Since Sirte was seized by Haftar’s forces last January, the Interim Government affiliated to the Libyan Arab Armed Forces (LAAF) appointed new local authorities to run the city instead of the elected local council. The municipality’s new Steering Committee, as it is dubbed, now faces a major test, as it has to confront the new coronavirus pandemic in addition to the continuing war in the west of the city. Due to Sirte’s strategic location and its importance as a connecting hub between several Libyan cities and communities, the way local authorities will respond to the crisis might have a determining impact on the evolution of the crisis in the rest of the country.

Local authorities in Sirte have so far acted with coordination and discipline in implementing the measures taken by the Interim Government on 13 March to combat the pandemic. The Steering Committee immediately ordered all the city’s schools to close and requested that the number of employees in public institutions is reduced to less than 10%, with the exception of medical and security institutions. Sirte’s inhabitants have largely complied with the preventive measures taken by the authorities to prevent the spread of the pandemic in the country. The curfew imposed by the Ministry of Interior to keep citizens off the streets from 5:00 pm to 6:00 am appears to be implemented and the Criminal Investigation Directorate (CID) is responsible for its enforcement. It was announced that the cars of any violators would be seized.

Despite the major awareness demonstrated by the city’s inhabitants, the Interim Government’s apparent improvisation in issuing decisions has created confusion. For example, on 23 March, the Ministry of Interior issued a decision announcing a complete lock-down of the city from 25 March to 3 April. Markets were to close their doors and inhabitants would not be allowed to leave their homes. Yet the Ministry rapidly reviewed the decision after intervention from Field Marshal Haftar, and a curfew was announced from 3:00 pm to 7:00 am. The Ministry of Interior’s decision contributed to creating congestion in the food markets, which risked exposing the citizens to the virus if there were already cases in the city. The decision also resulted in a 25 per cent increase in the price of goods, which has negatively affected a population already suffering from delays in the payment of salaries, acute shortages of gasoline, as well as from the scarcity of cooking gas and cash since the city has been placed under control of the Interim government.

These major challenges have crippled the Steering Committee. Although it created a specialised committee to combat the pandemic, this committee —led by the new director of the Ibn Sina Hospital—is caught between: the recommendations of experts together with public pressure to isolate the city and establish a complete lock-down; and the state of emergency with LAAF forces still fighting a war in the west of the city. Regardless of activists’ warnings and of calls for a lock-down, no action has been taken, which was likely to be intentional to avoid disrupting any military operations.

Another major concern for Sirte’s inhabitants is the Amsaad border-crossing between Egypt and Libya. Official documents have shown that Interim government authorities are not fully committed to closing the crossing and have authorised transport buses to enter, which could cause a disaster in Libya if any contaminated person were on board. While a number of closure violations have been reported at Libyan airports and border-crossings in general, Amsaad is particularly important for the city of Sirte as one can drive from the Egyptian border to the city without encountering any obstacle. This is in contrast to the situation in Western Libya, where the war now makes it more difficult for people to travel towards Sirte.

In these circumstances, the Steering Committee has not demonstrated preparedness for confronting a potential outbreak in Sirte. Doctors claim that the city lacks the most basic medical equipment and the chief personnel tasked with dealing with the pandemic lack appropriate training and experience in crisis management. As a result, many doubt the ability of the medical staff to respond to even a single case, which could rapidly result in the spreading of the virus. 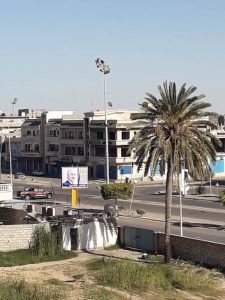 This situation may indeed be the natural result of selecting the city’s decision-makers based on tribal quotas instead of competency, and of the institutional divisions in the country. The city’s members of parliament have not been involved in managing the current crisis, nor have either of the Ministries of Health in the two governments played any role in addressing the needs of the city, especially with regard to respirators, medical analyses, and supplies.

The lack of action on the part of both the two governments has pushed Sirte’s inhabitants to lead volunteer initiatives to conduct street sterilisation campaigns and provide masks and other supplies for free. Yet the people’s awareness, commitment and support to the government will not be sufficient to protect the city, which is a key centre for the country. Moreover, if the people have to continue carrying out the tasks of the state, this will certainly contribute to widening the gap between the citizens and the government, as well as to dwindling confidence in the state, which will eventually be completely lost.

While Libya stands at a critical crossroad between the risks of expansion of the civil war and spreading of the coronavirus pandemic, and despite the domestic and international calls for the two governments to unify their efforts, the new local authorities in Sirte have not shown any sign of publicly communicating with the Government of National Accord (GNA) in Tripoli. In addition to the challenges posed by the closure of the western road, the continued fighting in the west of the city and the state of emergency, the local authorities suffer from a weak legitimacy base and are constantly worried that they might be accused of treason. This has made communication with the GNA particularly challenging, even though the best interest of the city would require it. With the exception of public sector salaries, which are still paid by the GNA’s Ministry of Finance in Tripoli, any form of cooperation and coordination has virtually disappeared between the city’s institutions and the GNA – even though it has not been made public.

Many doubts revolve around the Interim Government’s ability to address the needs of Sirte alone in the face of the current crisis. Amid a shortage of financial resources, suspended oil exports and significantly depleting resources due to the war, the Interim government is currently unable to meet the city’s basic gasoline and gas requirements. This indicates that Sirte may face a serious dilemma if the pandemic reaches it. The city’s strategic location makes it a critical point, which could lead to the spread of the pandemic in all Libyan cities.

So far, the Interim Government and the GNA have taken almost the same measures to address the coronavirus pandemic, which might indicate some form of non-acknowledged coordination between them on the crisis. But communication should be translated into a joint mechanism for action and the unification of efforts in the city, through the training of containment teams and the provision of the necessary medical supplies. Two measures should be prioritiszed for the immediate future: first, isolating the city to prevent the spread of the pandemic across Libya; and second, improving the preparations for controlling its spread in case any infection is reported in the city. The absence of specialised international organisations that could help raise awareness and support social stability in the city is strongly felt in these circumstances, as the new decision-makers clearly have very limited experience in crisis management and pandemic-related emergencies.