Since the Libyan Arab Armed Forces took control of the southern region on 15 January 2019, the southwestern capital Sebha has continued to deal with several crises, including the most recent outbreak of the coronavirus pandemic.

The first coronavirus case was recorded on 26 May and only some days later the National Centre for Disease Control announced a dramatic increase to 84 cases and one death. All the recorded cases are inhabitants of Sebha and so far it has been sufficient for many of them to quarantine at home as their health condition is stable. While three critical cases are receiving treatment at the recently opened Abdul Rahman al-Barakuli Centre located in the Thanawiyyah District, Sebha’s Medical Centre only remains open for treating non-coronavirus medical conditions.

The interim government-affiliated Coronavirus Advisory Medical Committee responded to these developments by confirming that Sebha has become an epicentre in the spread of the pandemic in Libya, threatening the lives of more than 250,000 Libyans and tens of thousands of migrants residing in the city. 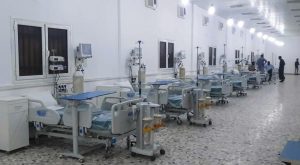 The current situation in Sebha is considered critical because of the poor health infrastructure in the southwest and a lack of well-equipped hospitals. There is a risk of overcrowding the Sebha Medical Centre, the region’s only medical facility equipped to receive and treat coronavirus patients, in the event that the pandemic enters the fourth phase and the Barkuli Centre is full. Furthermore, Sebha’s location 750 km from Tripoli and a lack of transport infrastructure make it logistically difficult for the city to receive aid and medical supplies from other regions in a time of war.

Some of the difficulties are that: 1) most roads are not suitable for transport as they either suffer from destruction of their asphalt surfacing or are covered by drifting sand; 2) there are no fuel stations on the roads between Sebha and some cities, obliging travellers to purchase fuel on the black market and take it with them; and 3) the city’s main gas, fuel and supply trucks constantly face the risk of being attacked by armed groups or road bandits.

The handling of the crisis by the interim government (IG) and the government of national accord (GNA) also faces administrative challenges. For example, although Sebha is officially under the authority of the IG, the southwest is still linked to the GNA because of the centralisation of the state and the GNA’s control of Libya’s Central Bank, which continues to finance the state institutions. At the outset of the coronavirus pandemic, the IG and GNA governments pledged 50 million dinars and 30 million dinars respectively to Sebha’s elected municipal council. However, the municipality has still not received any of this money from either government. Instead, according to a statement issued by mayor al-Shawish Gharbal, the city has received an insufficient supply of medical devices, equipment and supplies.

The GNA and IG have established parallel bodies to address the coronavirus pandemic, further complicating matters and negatively impacting the efficiency of the response. On the one hand, the IG has established four entities to counter the pandemic and equip medical personnel with the technical knowledge to treat the cases. These are the Coronavirus Advisory Medical Committee, the Coronavirus High Committee, the Coronavirus Emergency Room and the Ministry of Health’s Emergency Committee. On the other hand, the GNA has responded to the pandemic by forming the Primary Committee to Manage and Confront the Coronavirus. The committee, however, is affiliated with Sebha’s steering committee, which was recently appointed by the GNA, and not the IG-affiliated elected municipal council. 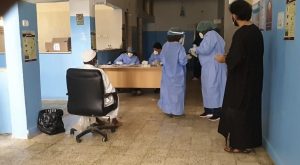 One example of the conflicting responses of the two governments is the conversion of the former female student residence called Abd al-Rahman al-Barakuli into a quarantine centre. Given the political division and delay in both governments acting, local authorities took the initiative of setting up the Barkuli building as a quarantine centre. The GNA-affiliated local authorities began maintenance work on the building and the IG-affiliated municipal council then equipped the facility with the necessary equipment, providing it with 100 beds, including 15 beds for intensive care, respirators and other medical equipment. They assigned a monitoring team linked to the National Centre for Disease Control to perform tests and set up hotlines to report suspected coronavirus cases. When the first cases were reported, however, the GNA officially sent a team to staff the building. This resulted in a disagreement between the governments and ended in the withdrawal of the GNA officials from the facility, although some of the staff still remain. After the dispute, the GNA began preparing its own quarantine centre in the Abd el-Kafi district with a capacity of 25 beds, but it still remains incomplete.

On March 18, the interim government announced a general curfew and on March 31 a further restriction on the access roads in and out of Sebha. On the GNA side, the government issued the same order through the Sebha Steering Committee on May 28. The orders were to be enforced and supervised by the Sebha Security Directorate, which is linked to the IG’s Ministry of the Interior, but the force did not fully succeed in enforcing the curfew.

Although the Sebha municipality received support from both the GNA and the IG after the number of coronavirus cases increased, it is still insufficient to contain the pandemic. Many factors continue to affect the governments’ responses to the spread of the virus in Sebha, including war, political division, the presence of many parallel bodies with unclear responsibilities and an overall lack of medical personnel and supplies. The continual competition between the two governments has only led to more confusion and mismanagement of limited resources.

Rema el-Fellani is a journalist and researcher based in Sebha.

Waleed Khaleefha is a journalist based in Sebha.