Rebranding Past Failures: The International Community’s New Approach in Lebanon 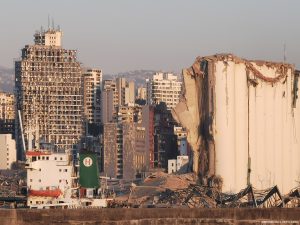 The international community, a longtime supporter of the Lebanese government, is adopting a new modality to channel reform-inducing aid to the country after the complete erosion of domestic and foreign trust in its state institutions. After the explosion at the Beirut port on 4 August 2020, the country’s largest donors rallied their support for the crisis-stricken country, but this time with a newly-minted framework. The 3RF, Recovery, Reform and Reconstruction, Framework goes beyond conventional conditionality and introduces a new model of institutional arrangements to govern the financing and disbursement of international aid and to oversee the implementation of the reforms required.

While the 3RF is limited in time and scope, being a two-year programme aimed at responding to the Beirut explosion, it is seen by the international community as a model that can be deployed to approach Lebanon’s biggest problem: a deep financial, economic, social and political crisis. This crisis, which coincided with a popular anti-establishment movement that started in October 2019, has already sent more than half of the population into poverty, the banking sector into insolvency and the government into default. Not only did the Covid-19 pandemic exacerbate the situation but it also ended the promising October movement as people grew hopeless. The most alarming element of the crisis has been the authorities’ response, as they have failed to take any meaningful decision since it started. This ineptitude is the result of the country’s collapsing political system, which is ruled by a foul mix of businessmen and warlords turned sectarian leaders after the civil war.

To answer this question, the two main elements of the 3RF should be scrutinised. The first is a conditionality model similar to previous aid programmes for the country, and the other is a new institutional model of governance and oversight.

A history of failed conditionality

The international community’s previous attempts at delivering conditional aid to Lebanon are perceived with a great deal of scepticism, which is warranted in the light of past failures and the nature of the political system.

Lebanon’s sectarian leaders maintain their roles through institutionalising client-patron relationships with the members of their sects. This clientelist structure depends on the allocation of state resources through distribution mechanisms within official institutions (for example, civil service employment). State resources have been largely financed through debt, much of which is in foreign currencies. Hence, the system ran on a fundamental assumption that foreign capital inflow was infinite and continual. This assumption was supported by Lebanon’s financial sector, which ran a Ponzi scheme luring investors to deposit their money in Lebanese banks in return for egregious interest rates (north of 10%). In 2019, the country had around $180 billion in deposits, three times the size of its economy. Most of this capital was used to finance the country’s regressive and unsustainable USD peg, to finance the government’s foreign currency liabilities and to fund rentier sectors such as a real-estate bubble.

When this assumption of infinite capital inflow was challenged due to macro-economic failures, the system was resuscitated by the international community through a multitude of international donor conferences. Recently, the government has failed to implement any of its reform promises to unlock US$11 billion pledged by donors at the Paris IV (CEDRE) conference held in 2018. As a result, no funding has reportedly been disbursed. This is in contrast to what happened in the past, when aid funding pledged in the Paris I (2001), Paris II (2002) and Paris III (2007) conferences was disbursed even when successive governments failed to honour their commitments. In fact, fewer than a quarter of the pledges made by the Lebanese government at the Paris III conference were implemented, while more than half of the pledged aid was disbursed.

The reasons why the aid was disbursed in the first place are twofold. First, the Lebanese government deployed devious tactics such as misreporting its progress on reforms and passing meaningless laws, branding them as reform measures. Second, some large donors had common interests with prominent figures in the political class, such as former Prime Minister and billionaire Rafik Hariri and, after his assassination, his son Saad, who also became Prime Minister.

Now that the government is in default, clientelistic distribution through institutional channels has been paralysed, forcing the traditional parties to use (less-effective) informal channels. They went from offering civil service jobs and permits to offering food packages and fuel for heat. The 3RF is seen by the elite as a new opportunity to refuel and recover some of their essential clientelistic structures.

The World Bank’s new $246 million loan for a poverty-targeting programme, agreed in January 2021, is a clear example of how the 3RF risks to meet the same fate of its predecessors. The loan will give the elite a breather amid the current public pressure. The poverty-targeting programme will be used as a tool to buy back the support of vulnerable families in the constituencies of the various traditional parties. This tool was given at virtually no political cost to the Lebanese government as it was not leveraged to demand the implementation of a single reform measure. The bill to pass the loan is being rushed through government and parliament despite the current political impasse. More worryingly, it was the Lebanese government that set the conditions for the loan, requiring its disbursement to beneficiaries in LBP at a rate that is around 30% lower than the actual one. The hard currency loan will be deposited at the central bank, the governor of which is currently under investigation in Switzerland for embezzlement.

Institutional arrangements are not the 3RF’s silver lining

The 3RF’s new institutional model strengthens the role of civil society organisations, which will be selected to form an independent oversight body and represented in the 3RF consultative group as is shown in the chart below. They will play the role of watchdog, ensuring the sound implementation of the programme. However, this arrangement is unlikely to achieve its intended result of making the 3RF a game-changer. 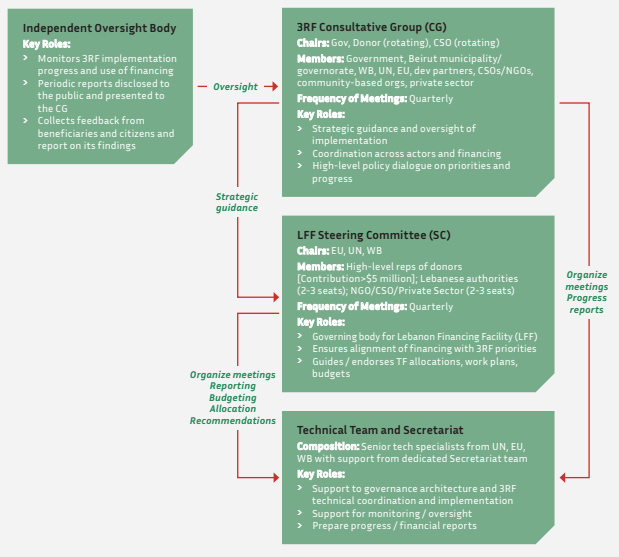 Lebanon’s civil society is often celebrated for being vibrant, with the sector seeing a large expansion throughout the post-war era. However, this is a clear indication of the weakness of the state, which often shouldered off the burden of development and social programming onto civil society. It also indicates the fragmentation within the sector due to limited cooperation and increased competition, impeding the organisations’ policy impact. Moreover, the sector is highly donor-dependent due to the lack of public government support, which affects its agenda, programming and ability to challenge the donors’ direction. This dependency renders it unlikely that civil society can skew opinions on big decisions within the 3RF’s institutional structure

In addition, institutionalising civil society’s watchdog role is unlikely to be an incentive for the elite to achieve better implementation as these groups are apolitical and are not representative of a constituency.

The need for a new approach

Proposing the right approach to Lebanon’s current impasse is complex and exceeds the scope of one article. However, a few general points can be made in this regard.

First, the international community should capitalise on the political leverage that it currently has in Lebanon. While it is not desirable for foreign actors to have a leading role in determining the political fate of the country due to sovereignty concerns, the international community should  promote a serious effort to make Lebanon’s decision-making process as participatory as possible and take into account the opinions of not only civil society organisations but also emerging political groups.

Furthermore, given that Lebanon’s root problem is political, the international community should use its leverage to prioritise the implementation of reforms that contribute to integrating people back into the state and away from sectarian co-ops. Only through reforms, such as judicial independence and the universal provision of basic services, can Lebanon move towards sustainable political change.

Last, a serious effort should be led by civil society organisations to unite under a common umbrella in order to gain political weight and advocate for the common cause of an economic, political and social overhaul in Lebanon. Coordination between civil society organisations, the private sector and emerging political groups is necessary to create a shared domestic agenda based on the national context and this needs to be independent of donor programming. For once, this united front should move beyond the role of watchdog and into the role of actual decision-makers that can contribute to the policy process.