Snap Back to Reality: Saad Hariri Returns as Lebanon’s PM

On the first anniversary of his resignation, Lebanese Prime Minister Saad Hariri is once again tasked with forming a government. Last year, protests broke out across the country in what became known as the 2019 October Revolution, which demanded the removal of the corrupt political regime in its entirety. These demands came as a direct response to a crippling financial and banking crisis but reflected many grievances resulting from the decades-long sectarianisation of social and political life.

Succumbing to protestors’ demands, Hariri resigned from government in late October 2019, nominally for the sake of the country’s ‘dignity and safety.’ This was a politically savvy signal that he was unwilling to continue working under the rule of President Michel Aoun’s Free Patriotic Movement (FPM), an ally of Hezbollah, and it doubled up as a transfer of blame. However, having served three terms, Hariri personally oversaw the country’s plunge into an unprecedented economic crisis and offered political coverage to those who helped engineer it. After a year of cataclysmic events for Lebanon, including the Beirut port explosion and the Covid-19 pandemic, was Hariri really the only option for PM? This decision makes it clear that in Lebanon, political life excludes the broader Lebanese population and blatantly prioritises the agendas of the political and economic elite. 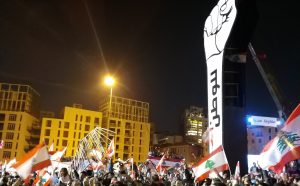 Realpolitik, or No Time for Dreamers

Hariri’s return came as a big disappointment to citizens who had held on to the hope for change. However, for the Lebanese political class Hariri is a seasoned politician with the international connections needed to negotiate on Lebanon’s insurmountable debt and fragile geopolitical standing. Domestically, he has a ‘working relationship’ with most political actors, including rival Hezbollah. On Thursday, Hariri was elected PM with 65 out of 120 votes in parliament. Support came from his own Future Party, the Amal Party, the Syrian Socialist Nationalist Party (SSNP) and the Progressive Socialist Party (PSP), while FPM, Hezbollah and the Lebanese Forces (LF) abstained. Despite Hezbollah’s abstention, the party tacitly encouraged Hariri to return in order to stabilise the country. Still, Hariri won by a slim majority and might experience hurdles in forming and running his cabinet. Is this, however, the right time to return to realpolitik?

Other Options Have Failed

Throughout the year, there have been multiple unsuccessful attempts to cobble together a functioning government. Hassan Diab, a politically inexperienced academic who formed a technocratic government in December 2019, failed to push the necessary political or economic reforms and resigned following the Beirut explosion. In the weeks after the explosion, French President Emmanuel Macron visited Lebanon twice to secure support for a new political process and recommended diplomat Mustapha Adib for the PM position. Adib was made PM-designate in late August, but his plans to form a cabinet of independent specialists were undermined by the unwillingness of political parties to cooperate. He resigned a month later, much to the chagrin of President Macron, who accused the Lebanese politicians of betrayal and prioritising their own interests at a time of national emergency.

A Year of Woes

Lebanon’s financial and banking collapse is the end result of a long-term Ponzi scheme run by the country’s political and economic elite, who financed national debt by acquiring loans and artificially maintained the strength of the Lebanese lira. Meanwhile, these same elite actors embezzled large sums that had been allocated for public spending. Lebanon has a dollar-based economy, and the Lebanese lira is still officially pegged at 1,500 L.L. to the dollar, even though it ranges between 8,000 and 9,000 L.L. on the black market. The ensuing dollar shortage has led to policies that have blocked many people from accessing their bank deposits – excluding, of course, those individuals who have the right political and banking connections. 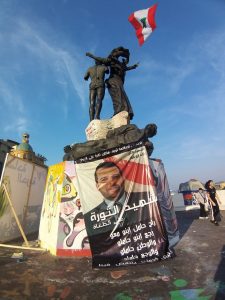 A martyr of the revolution at Martyr’s Square, Beirut, December 2019. Taken by author

Apart from the banking crisis, troubles have been mounting elsewhere. Based on studies conducted in the first half of the year, the United Nations estimates that more than 55% of the Lebanese population are now in poverty and struggling to acquire bare necessities. Last year, as people flooded the streets in protest, Lebanese security forces were stocked and ready with military-grade tear gas and live ammunition, which was characteristic of an increasingly repressive environment that many activists are calling a new police state. In March, the Covid-19 pandemic further strained the country’s weak healthcare system, which was already suffering from equipment and medication shortages induced by the dollar crisis. Finally, the Beirut port explosion on August 4thclaimed 200 lives and injured more than 6500 while destroying entire neighbourhoods. Despite these catastrophes, the country’s political establishment has so far failed to implement any mechanisms to ensure accountability or transparent rule of law. As a result, the country is witnessing a massive exodus of people who are hoping to start new lives elsewhere.

However, for the political class, little has changed. Refusing to take any responsibility, in a recent televised appearance President Aoun asked the Lebanese people where the plans for economic stability and development had gone. In the Lebanese political game of ‘pointing fingers’ at other political parties, and by extension sects, politicians are escaping accountability unscathed.

A Burning Fist, an Ongoing Revolution

To activists, Hariri’s return is the ‘peak of the counter-revolution’– an added injustice atop the litany of wrongs against which they have been protesting. The evening before the parliamentary consultations, pro-Hariri thugs torched the revolution’s ‘fist,’ an 11-meter-long cut-out in the centre of Martyr’s square in Beirut that symbolises commitment to the principles of the uprising. Throughout the uprising, the fist was surrounded by pictures of martyrs who died in the protests – a testament to ongoing resistance. The message conveyed by the thugs was clear: the revolution (and its afterlife) cannot deter Hariri from reclaiming power and carrying out ‘politics as usual.’

Demands for accountability for Lebanon’s social and economic collapse and justice for those killed and injured in the Beirut explosion have so far fallen on deaf ears. Re-electing a PM who recently steered the country into collapse foreshadows nothing good. Even if the formation of a stable government manages to deliver on short-term demands that temporarily alleviate people’s suffering, the root causes have yet to be acknowledged by the country’s indifferent leaders. While the Lebanese people continue to absorb the shock of this year of woes for now, public squares are likely to fill in protest again.