Sweida Protests: The Start of a New Syrian Revolution? 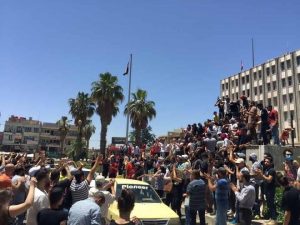 Since 6 June 2020, protests against deteriorating living conditions have been ongoing in the predominantly Druze city of Sweida. The political slogans chanted in the protests have reached the point of demanding the toppling of the Syrian regime. They also hold President Bashar al-Assad directly responsible for the failure to resolve the country’s various social and national crises. Certain slogans first used in the early days of the Syrian revolution have been revived in the Sweida protests more than five years since the last anti-regime demonstrations in the city. Although some of the more socially oriented chants are new to the Syrian revolution, such as ‘Bread, Freedom, Social Justice,’ there are also others of a more patriotic character declaring solidarity with other Syrian provinces and demanding the withdrawal of Iranian and Russian forces from Syria.

The Sweida protests have come at a time of continuing and unprecedented collapse in the value and purchasing power of the Syrian pound,[1]while wages in both the public and private sectors have remained stagnant.[2]Penalties imposed by the security agencies on money transfer companies not adhering to the official dollar exchange rate have decreased the value of remittances and other transfers sent home by Sweida’s expatriates living abroad in the Gulf and Europe. This has coincided with the global Covid-19 pandemic, which  threatens the jobs of many Sweida natives working abroad, large numbers of whom were forced to return to Syria from the Gulf and Lebanon in April and May, having lost their jobs. This combination of factors has pushed a large proportion of Sweida’s population below the poverty line. Previous Druze communal solidarity networks based on family or religious ties have failed to stave off the repercussions of this unprecedented impoverishment.

The latest protests were preceded by a series of smaller sit-ins and demonstrations at the start of 2020 under the slogan ‘We Want to Live.’ These focused solely on socio-economic demands and avoided political slogans. Recurrent fires in April and May across large swathes of the wheat plains in western Sweida and in the forestland to the east caused a wave of widespread anger among locals, who held Syrian state institutions responsible for the failure to extinguish the fires. In late May, a number of activists organised several sit-ins in response to thesefires, from which emerged the idea for the later larger demonstrations.

The Protesters and their Supportive Environment

A significant number of those who took part in the ‘We Want to Live’ campaign are now participating in the current protests. On 8 June – the second day of the demonstrations – the number of protesters reached 350, mostly comprising youths under the age of 30 and including many women. This indicates that a substantial proportion of today’s demonstrators were still children during the 2011-2013 protests. However, they carry on their legacy, as is evidenced by the revival of many of the same chants and songs. Most of these young demonstrators – a considerable percentage of whom are university students and recent graduates without jobs – hail from the middle class, which has faced unprecedented impoverishment in the past few years. The movement is not confined to natives of Sweida city. People from neighbouring towns and rural areas, especially Shahba and al-Mazraa, are also actively involved. Moreover, the demonstrations have been attended by a wide range of historical regime opponents from the remnants of communist and other leftist parties. By contrast, activists from the 2011 revolution generation who remained in Sweida have generally preferred to watch events from a distance, trying to pass on expertise without intervening directly, thus allowing the new movement to express its own voice.

More important than the profiles of the organisers is the level of public acceptance enjoyed by the demonstrations. This has endured despite their explicitly political demands in a region mostly populated by an ethnic minority that has managed with difficulty to stay neutral throughout the years of the war in Syria. Despite crossing through the city’s commercial centre more than once, the demonstrators have not faced notable opposition from within the community. Between 2011 and 2013, this centre saw multiple attempts at gatherings and demonstrations, which were usually met with confrontations by traders and merchants and attacks by passers-by, not to mention the heavy security presence. In June 2020, the initial demonstrators have been joined by groups from various strata of society, including traders and merchants now severely affected by the declining economy.

The demonstrations have also won moral support from unarmed community groups, such as theso-called ‘neighbourhood strongmen,’ and the implicit blessing of certain armed groups. The organisers asked the latter not to intervene unless demonstrators faced violence in order to keep the gatherings peaceful. It appears that one such group is close to Sheikh Laith al-Bal‘ous, son of the late Sheikh Waheed al-Bal‘ous, founder of the Men of Dignity Movement.[3]Laith, who has left the Men of Dignity Movement, recently succeeded in bringing together some of the remnants of the dissolved Single Artery movement after pledging to shun those carrying out kidnappings and illicit trade. Although few activists were depending on the protection of these armed groups, and indeed most made no attempt to contact them at all, their implicit endorsement nonetheless provided, at least during the first week of protests, a form of deterrence against the pro-regime shabbihagroups.

Meanwhile, it appears that the rumours of implied support for the protests from the Single Artery movement’s remnants may dissuade the Men of Dignity forces – the largest local armed group in Sweida – from joining the demonstrations, given the enmity between the two groups. In addition, the demonstrators’ chants against the regime and Russia may further compel the Men of Dignity’s leader, Sheikh Yahya al-Hajjar, to adopt a neutral position given the informal mutual understandings that have recently governed his relationship with Damascus. All of this reflects a delicate balance among the multiple mutually opposed armed groups that the protest movement has succeeded in exploiting. This has been done by leveraging people’s anger at their socioeconomic situation amid the inability of the regime and state institutions to stop the economic decline in a region of minorities in which the regime has long sought to avoid intervening directly with its military and security forces.

Between Limited Attacks and Local Concerns

On 10 June, the Sweida branch of the Syrian Students Union (Baath party’s organisation) invited students of universities and institutes and employees in official institutions and the public sector to march “in support of the leader of the homeland.” Despite the public threats that accompanied the ‘spontaneous’ invitation and the mobilisation of all regime party and social networks, the turnout did not exceed 1,000 people. The regime was unable to mobilise the public support needed to give the appearance of loyalty and manipulate the protests into opposing the US Caesar Syria Civilian Protection Act and blaming it for the country’s economic failures. This weak mobilisation may be explained by the people’s general indifference, given the hardships and economic woes they have suffered despite all the regime’s promises. It appears the regime no longer has any socioeconomic tools to help it mobilise people and its lack of resources is reflected in its declining ability to feed its own social networks and local intermediaries. Accordingly, it can only rely on threats, intimidation and force. On 15 June, the regime indeed resorted to its new-old method among the Druze in Sweida. Baathist groups armed withknives and sticks attacked peaceful demonstrators and law enforcement forces intervened to separate the two parties and then complete the assault on the demonstrators and arrest targeted persons.

Despite the implicit public approval of the emerging protest movement in Sweida, the larger challenge remains its political demands, which it has escalated to the point of demanding the overthrow of the regime. This has discouraged many strata of the economically disadvantaged from joining the movement. Many still fear the prospects of being pursued by the security agencies and arrested should they leave Sweida and of losing their jobs in the public sector and facing additional obstacles in their daily dealings. The young demonstrators have also aroused some local unease by chanting in support of Daraa, where a similar protest movement is underway in the town of Tafas. Some Sweida locals feel this has come too soon after recent clashes between the Fifth Corps in Busra al-Sham and armed groups from the town of al-Qaria in Sweida governorate.[4]

Some chants from the revolution adopted by the demonstrators, including songs by the  famous protest leader Abd al-Basset al-Sarout, have also caused some local discontent, given the various transformations undergone by the late al-Sarout. Despite the warm welcome with which many supporters of the Syrian opposition greeted the Sweida protests, a campaign led by certain opposition figures in Idlib criticising the Sweida movement and accusing it of riding the revolutionary wave ten years on from its launch has further dissuaded some of the undecided in Sweida from joining the protests.

What Are the Next Steps?

Having raised its political demands to the maximum, the protest movement in Sweida is unlikely to be able to lower them again. This may hinder it from spreading horizontally among the people, and perhaps limit the prospects for its expansion. By declaring ‘Syria is for us, not for the Assad family’ as its primary slogan, the movement may have prevented itself from growing larger. The slight improvement in the value of the Syrian pound may also bring down the level of public anger somewhat.

Even if the protestors in Sweida have become prisoners to their own political demands, the main fear of the regime is that these protests might inspire echoes in other areas under its influence, which could lead to matters getting out of control. The Idlib demonstrations welcoming the protests in Sweida are of limited significance, yet small demonstrations have taken place in Aleppo’s al-Rashideen neighbourhood, the town of Zakia in the Damascus countryside and Tafas in the Daraa countryside. Therefore, the regime is likely to do anything to quell the protest movementin Sweida so as not to usher in a new revolutionary wave sweeping its dilapidated areas of control amid the severe financial crisis and the exhaustion of its stock of economic and political solutions.

The arrest of activists would give the regime the upper hand in negotiating the release of detainees through mediators and notables on the condition that the current movement is halted. But a wider campaign of arrests would exert pressure on the local armed groups that have previously pledged to protect the demonstrators, which may lead to confrontations they do not desire. The regime would prefer this kind of escalation to strike two birds with one stone: halt the demonstrations and control the local armed groups.Moreover, as the demonstrations are entering their second week, Sweida is witnessing a sudden escalation in random attacks and kidnappings by armed forces, especially on the Damascus-Sweida road and in the western countryside of Sweida. In another possible sign of escalation,warnings have been sent by groups linked to the Fourth Division, which is close to Tehran, about a possible military intervention in Sweida by the Division, which is currently deployed in Daraa.

* Mazen Ezzi is a research contributor working on the Wartime and Post-Conflict in Syria project (WPCS) within the Middle East Directions Programme of the Robert Schuman Centre for Advanced Studies at the European University Institute in Florence.