The Geneva Ceasefire Agreement: Implementation Challenges and Their Impact on Sirte

The armed escalation that began in April 2019 with the General Command of the Libyan Arab Armed Forces’ (LAAF) attack on Tripoli led to an escalation in the Sirte area and risked international confrontation in the broader Sirte region. Sirte is pivotal in the conflict and has local, regional and international dimensions.[1] [2] [3] Therefore, the international community renewed its efforts in August 2020 to de-escalate tensions in Sirte. 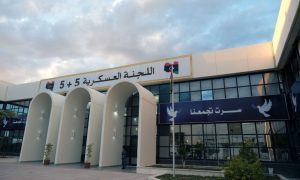 International efforts coordinated through the United Nations (UN) mission succeeded in leading a dialogue with political, economic, and military tracks. The military track managed to bring the local parties together in Geneva to sign a ceasefire agreement and to form a Joint Military Commission to oversee the ceasefire’s implementation. The agreement signed in Geneva on 23 October 2020, between the Government of National Accord (GNA) and the General Command of the LAAF, raised hopes that the situation could be calmed in the Sirte region.

The Geneva ceasefire agreement includes 12 terms, and focuses on the main issues that would promote a lasting truce by means of reducing tension and by addressing some of the humanitarian issues that led, in the first place, to escalation. The agreement included: a ceasefire; the evacuation of any military presence from contact areas; the withdrawal of mercenaries; the opening of the main roads; stopping arrests based on their political or tribal affiliation; prisoner exchanges; stronger ceasefire mechanisms between the two sides; and other important and interrelated terms.[4] The implementation of this agreement’s terms is assigned to the Joint Military Commission, called the “5+5 Commission,” in reference to the five members meant to represent each of the two military parties, with its headquarters in Sirte.

In practice, the Commission has, to date, managed to implement about 40 percent of the agreement’s terms. There has been a ceasefire, major roads have been opened, prisoner exchanges have taken place, and communication between the two sides has continued. All these terms have been achieved within 10 months; a significant achievement given the catastrophic situation before. However, the inability of the Commission to implement several of the terms makes this success extremely fragile, especially given the fact that the terms are interdependent.

Despite the 5+5 Commission’s efforts, the challenges and obstacles remain enormous. The absence of trust between local parties is still a problem, threatening the collapse of the truce and a renewed eruption of violence. So, what are the challenges facing the Commission? And how has the implementation of some of the agreement’s terms impacted Sirte and neighboring areas?

The Commission has faced various obstacles to implementing the terms of the Geneva ceasefire with regards to freezing military exercise agreements. The Commission’s first attempts to implement these terms were met with political and military opposition. On 14 August 2021, the Commission directed an official letter to the Presidential Council and the Government of National Unity (GNU) regarding the freezing of all military agreements and memoranda of understanding—especially with Turkey and Russia—until the election of a head of state. But the message was rejected by Libyan political forces, first and foremost the High Council of State, which opposed the Commission’s interference in political affairs and international agreements.[5]

The High Council of State’s stance, which was in line with the position of other political forces, coincided with the leaking of a document issued by the Commission, recommending the restructuring of some security and military agencies of the Government of National Accord (GNA). These documents’ appearance in the media contributed to a notable shift in public opinion. Media outlets, activists, and bloggers criticized the Commission’s exclusive focus on the GNA, and its failure to address the mercenaries brought in, without legitimate agreements, by the General Command, and the Military Investment Authority, which had been formed without a clear law. They also criticized recent statements by the General Command and its declaration that it had no affiliation with or recognition of the GNU, shattering the basic reason for dialogue with it.[6] [7]

It is more likely that the Commission quite deliberately decided not to focus on armed groups in western Libya. Its targeting of some security agencies, or armed groups formerly belonging to the GNA, came on the basis of the draft budget of the GNU. This had shown that these agencies and groups are independent and that they are neither affiliated with the Ministry of Defense or Interior, nor unified in their affiliation.

The Commission’s popularity declined after the aforementioned document was leaked. Part of the groupings opposed to the General Command criticized those measures and questioned the loyalty of a GNA member of the Military Commission, Major General Ahmed Abu Shahma. His recent actions have been questionable to some, especially as he had been responsible for securing Sirte before it fell to the General Command in January 2020 without resistance. Abu Shahma has not yet commented on the criticisms against him, save to say that these official correspondences are confidential, and that they should not have been leaked to the media. This inflamed the campaign against him on the grounds and he was accused of a lack of transparency.

The public’s poor understanding of the terms of the Geneva ceasefire agreement has also contributed to creating a vacuum, which was exploited by political forces hostile to the ceasefire. Freezing military agreements and the orderly restructuring and integration of the security and military agencies are among the terms of the ceasefire, for which the Commission was formed. The public may be unfamiliar with these terms, but political forces and their allies in the media have used them to discredit the truce.

The 5+5 Commission is taking measured and balanced steps between military tasks and issues affecting public interest. The Geneva ceasefire agreement’s terms were not only designed to address the military conflict. They also addressed some humanitarian and social issues.[8] The Commission has been able to open two of the three roads that were closed—the coastal road between Sirte and Misrata; and the southern road between Gharyan and Shwerif—while the road between Jufra and Abu Qurayn remains closed. 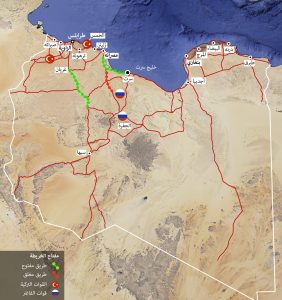 Opening the coastal road led to a marked rise in the 5+5 Commission’s popularity among the general public. This key road had been closed since January 2020—when lines of contact formed in the Sirte area—and all attempts to open it had previously come up against the intransigence of the combatants. GNA forces had viewed the presence of Janjaweed and Wagner Group mercenaries in Sirte and Jufra as a threat to their forces, which prevented them from agreeing to open the road. But even when the Abdul Hamid Dbeibeh government was convinced and announced the road’s opening in June 2021, the General Command’s representatives on the 5+5 Commission rejected the announcement. They stated that it was made without prior coordination and without the necessary security arrangements.

It is worth mentioning that the coastal road is not only a major lifeline for the city of Sirte. It is also an important commercial and social road connecting eastern, western, and southern Libya. Therefore, its opening will have a very positive impact in enhancing connection and transportation between eastern, western, and southern Libya through Sirte.

As for the city itself, the positive effects of opening the road quickly emerged. Goods prices decreased significantly due to the lower cost of transport, and since the first day of the road’s opening the city also saw significant trading activity between east and west Libya. Indeed, hundreds of trucks cross daily now to transport goods and merchandise safely and at a cost lower than the long, dangerous southern road.

Hopes also emerged that the fuel crisis that struck Sirte during the road closure period could be resolved. The city and its surrounding villages meet their fuel needs with fuel from Misrata’s central depot. But despite a number of fuel trucks being sent to the city, the crisis continued and stations charged citizens additional fees, creating tension and a culture of blame. Several voices in Sirte have started officially calling for a fuel depot to be established inside the city to decisively put an end to the crisis.

The 5+5 Commission has also achieved remarkable success in facilitating the release of prisoners and those detained for their political or tribal affiliations: a huge number of whom languish in jails on either side as a result of false reports or suspicion. The Commission’s efforts culminated 21 August, when the fifth prisoner and detainee exchange was carried out on the lines of contact 50 kilometers west of Sirte.

Despite promising results, the media once more played a negative role, highlighting the identity of those who had been released. While no list of the prisoners released by the GNA forces has been made public, a list of those released by the General Command was published across social media. The focus of criticism this time was that at least five prisoners were not captured during battles. Rather they had been arrested on the basis of their political or tribal affiliation or because of the suspicion that they were loyal to the GNA. Sirte’s share of the list of 17 detainees was three people arrested from their homes who had not participated in the war.

This is the first time that prisoners from Sirte have been part of a prisoner exchange. Most of the city’s detainees, regardless of the reasons for their arrest, were released months after being questioned, to ensure that they were not involved in any armed or political action against the General Command.

It is clear that the ceasefire’s various terms are interconnected and that they should be dealt with collectively. Neglecting any one term will have knock on consequences for the others. For example, the failure to implement the second term—which calls for the evacuation of all foreign and mercenary forces and the redeployment of local military forces—has significantly affected the Commission’s ability to finish opening the land roads in a full and relatively stable way. For instance, the Jufra-Abu Qurayn raoad remains closed.

The public’s response to the media is evidence of a general lack of understanding of the terms of the Geneva ceasefire agreement. Most of the measures adopted by the Commission are in accordance with the terms of the agreement, according to a correct understanding of it. However, the misunderstanding—and the Commission’s sidelining of the fifth article, relating to the media track—created a news vacuum. This was exploited by political forces aiming to undermine efforts to implement the agreement and to move from a fragile to a lasting truce. Ultimately, it also hinders the ultimate goal of bringing together the different forces within an integrated framework of cooperation.

It is not sufficient to publish the terms of the agreements and make them accessible to the public. Most people will not examine them with any special care, making them susceptible to forces that undermine stability through their control of the media. Therefore, ensuring the public’s understanding of political agreements and their terms through various tools would better contribute to the success of these agreements and would facilitate their implementation.

The success of the 5+5 Commission in implementing the agreement could be the first building block of stability in Libya. The agreement addresses several important aspects and aims to create a foundation for the transition from war to stability and then development, and the beginning of economic interlinkage between Libya and the international community. The transition from a competition for control to cooperation and development could positively affect all Mediterranean Basin states.

[4] For the Geneva agreement, see:  https://unsmil.unmissions.org/sites/default/files/ceasefire_agreement_between_libyan_parties_english.pdf

[6] Al-Quds Al-Arabi, “Haftar’s Spokesman: The Armed Forces Have No Connection to the Government, Not Even at the Level of Communication,” 28 April 2021. https://www.alquds.co.uk/الناطق-باسم-حفتر-القوات-المسلحة-لا-يرب/

[7] Russia Today, “Haftar Refuses to Submit Libya’s Army to Any Authority…Is a Clash Coming with the Presidential Council?” 10 August 2021. https://arabic.rt.com/prg/حفتر-يرفض-خضوع-جيش-ليبيا-لأي-سلطة-هل-الصدام-قادم-مع-المجلس-الرئاسي-1260910/اسأل-أكثر/