The UAE and Damascus: The Normalisation of the Syrian Regime 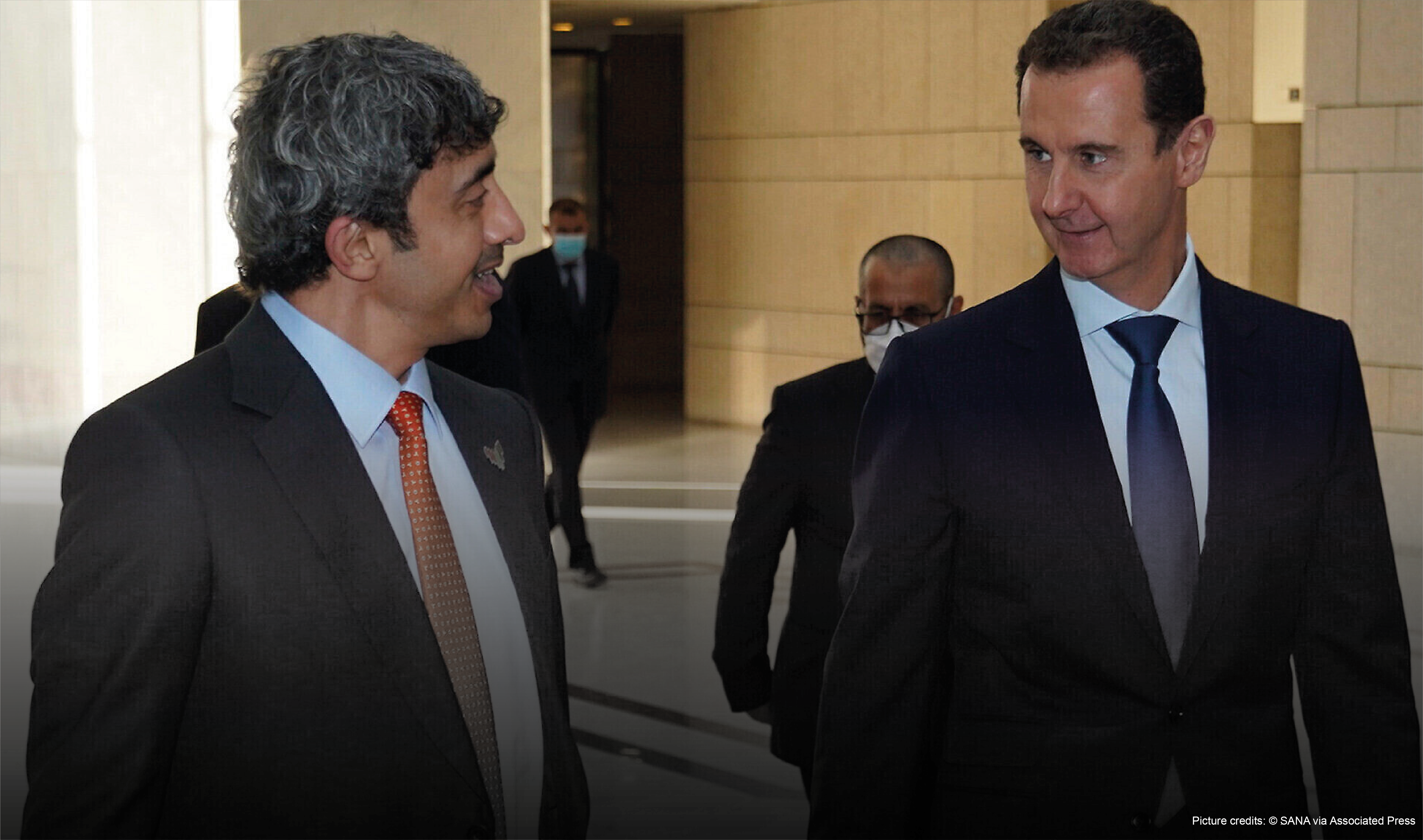 The United Arab Emirates (UAE) Foreign Minister, Sheikh Abdullah bin Zayed, met Bashar al-Assad in Damascus on 9 November 2021. A visit by the most senior Emirati official to Syria in a decade signals the consolidation of relations between Damascus and Abu Dhabi. From 2015, the UAE has shifted from supporting the Syrian opposition, to withdrawal from the Syrian conflict, to rapprochement with the regime. This process culminated with the opening of its embassy in Damascus in December 2018, seven years after it had been closed.

The UAE took the lead, among influential Arab nations, in normalising relations with Damascus, after the UAE agreed on the full normalisation of relations with Israel. This occurred against the background of Washington’s foreign policy reorientation, and the fact that Syria is no longer a top priority. The US’s main focus under the Biden administration is the need to “shore up American competitiveness” in order to meet the challenges posed by China (primarily) and Russia. At the same time, US allies in the region are keen to pursue more autonomous policies from Washington, because the US has proved increasingly unable to act as a long-term partner and security guarantor.

Consolidation of the UAE and Syria’s Political Relations

Since late December 2018, relations between the two countries have developed. Multiple visits and the participation of Syrian officials in UAE events have been a fact on the ground since 2019, while UAE officials and businessmen have also travelled to Syria.

The UAE has maintained a high level of humanitarian assistance to Syria through UN agencies based in Damascus, working in close coordination with the Syrian regime. UAE aid provided to Syria from 2012 to March 2021 stands at more than USD 1.1 billion in the humanitarian and development sectors and the UAE has provided basic services in education, health, housing and power supply, for Syrians in Syria and neighbouring countries. Furthermore, the UAE contributed up to USD 50 million for re-stabilisation programmes in the north-east of Syria in cooperation with international partners. During the Covid pandemic, the UAE sent at least four shipments of vaccines to Syria, while providing relatively large quantities of medicine, sterilisation material, and testing material for Coronavirus. The continuous humanitarian assistance to Syria has been presented by UAE officials as a demonstration of solidarity with the Syrian population.

UAE officials have also encouraged normalisation regionally and internationally with the Syrian regime, while repeatedly calling for Damascus’ return to the Arab League. Following on from the UAE’s policy of rapprochement with Syria, other Arab states have taken a similar path, particularly in the past few months. In September 2021, for the first time in a decade, an official delegation of high-ranking Lebanese ministers came to Damascus and Egyptian and Syrian foreign ministers met at the U.N. General Assembly. In the following month, it was the turn of Jordanian King Abdullah II to reconnect with Assad in a phone call. This was the first conversation in ten years and followed on from the full reopening of the main border crossing between the two countries a few weeks before. In addition, an agreement to pipe Egyptian natural gas and Jordanian electricity to Lebanon via Syria was, with Washington’s approval, concluded in August 2021.

UAE Foreign Minister Sheikh Abdullah bin Zayed argued in March 2021 for international cooperation with the Syrian regime and stated that US sanctions on Syria “make the matter difficult”. The ‘re-election’ of Bashar al-Assad in May 2021 also constituted an implicit message to regional and international actors that the Syrian regime was here to stay and was a signal “to give up on expecting political concessions”. In the following months, new meetings were held between Syrian and Emirati officials in the UAE, to discuss ways to deepen political and economic cooperation between the two countries, including a possible role for the UAE in rehabilitating and developing water systems and infrastructure in Syria. The Syrian–Emirati Joint Businessmen Council was re-activated at the end of October.

In addition to the UAE’s objective to push for the normalisation of the Syrian regime on the regional and international stage, Abu Dhabi is also pushing for a role in Syria’s future, alongside other regional actors such as Turkey and Iran: it does not have the strength though to challenge Turkish and Iranian influence in the country. Abu Dhabi’s relations with Ankara and Teheran have grown tense in these past few years, and UAE Foreign Minister Sheikh Abdullah bin Zayed denounced Iran and Turkey’s actions in Syria as “colonial” in 2017. However, these tensions have recently moderated somewhat. Abu Dhabi and Ankara held several high-level meetings, including the visit of the UAE’s national security adviser, Sheikh Tahnoon bin Zayed al-Nahyan, to Turkey in mid-August 2021 and a few weeks later there was a phone conversation between Turkish President Recep Tayyip Erdogan and UAE Crown Prince, Sheikh Mohammed bin Zayed al-Nahyan. Hostilities between the UAE and Iran started, meanwhile, to fall off as far back as the summer of 2019. Two days after UAE Foreign Minister’s visit to Damascus, Iranian Foreign Minister, Hossein Amir Abdollahian, described the visit as a “positive step” in regional cooperation and emphasised that bilateral relations between Abu Dhabi and Teheran were of “particular importance” in a phone call with his UAE counterpart. Meanwhile, US officials expressed Washington’s concerns regarding  “the signal” sent by this meeting. They reiterated that the US will not “support efforts to normalise or to rehabilitate Bashar al-Assad” before a political transition.

The consolidation of political rapprochement between Abu Dhabi and Damascus could potentially open the door to Emirati investments in various economic sectors in Syria. As before 2011, the main interests for UAE investors would be real estate and construction projects, transport and trade. Since 2017, the UAE has been the third most important supplier of goods for Syria, with exports standing at USD 750 million in 2020. Emirati exports are, however, mostly Chinese and Iranian products transiting through Dubai. These are then rebranded as being UAE-made in order to benefit from the advantages of the Greater Arab Free Trade Area (GAFTA): customs fees are exempted on trade between GAFTA countries.

Two days after the visit of the UAE’s Foreign Minister to Damascus, the Syrian Electricity Ministry and a group of Emirati based companies concluded a cooperation agreement to establish a 300-Megawatts solar power station in Widyan al-Rabie near Tishreen power station in the Damascus countryside. The construction should take two years. However, the prospects of a massive return on Emirati investments in Syria are fraught with complications in both the short and medium term. US sanctions against Syria remain a significant obstacle for Emirati investors. Major potential real estate schemes and investments in key sectors of the Syrian economy benefiting Damascus and regime-affiliated businessmen might easily become a target for sanctions. In this regard, it is still unclear whether the recent UAE-Syria agreement to build a solar power station in Damascus province will be exempted from US sanctions, like, before it, the project to pipe Egyptian and Jordanian energy to Lebanon through Syria. This agreement was approved by Washington as falling “under the humanitarian category”, and therefore “no sanctions waiver would be required in this instance”.

At the same time, the UAE has focused on internal economic recovery and reforms after the COVID-19 pandemic and associated economic crisis. It has aimed at attracting skilled professionals and boosting trade and foreign investments. In 2020, the UAE’s economy shrank by 6.1%. This was the first contraction in GDP since the financial crisis in 2009. Moreover, the prospects of significant Emirati investments, and more generally of any foreign investments, in Syria remain low because of the lack of political and economic stability in the country, not to mention the high level of destroyed infrastructure and corruption. In this context, the lack of potential economic profits, in the short and mid-term in Syria, do not encourage Emirati and foreign investments. The very small value of Foreign Direct Investments (FDI) into the Syrian economy was recorded in 2020, for the ninth year in a row, according to UNCTAD. Some minimal levels of FDI flows continue from Russia, and, to a lesser extent from neighbouring countries such as Lebanon.

The UAE’s change of strategy towards Syria, since 2015, and the push for the normalisation of the Syrian regime is going forward, even though at a slow pace. The UAE will most probably continue to play a leading role in Damascus’s return to the regional stage. It will potentially also serve as an intermediary, for Syria, with Western states, particularly on issues of interest for them such as the “war on terror” or the need for “regional stabilisation” in order to stop “new flows of migrants” to Europe.

More generally, the UAE’s visit to Damascus and the harmonisation of relations between various Arab regimes and Syria reflect a larger trend for a majority of influential regional players, supported by different international powers. There is a move to consolidate a form of authoritarian stability in the region. Despite continuous rivalries among various states in the region, they hold a common position in wanting to return to a situation similar to that in place before the uprisings in 2011. In this framework, the relegitimisation of the Syrian regime on the regional scene is part of this plan by the UAE and other states. It goes hand in hand with other processes such as putting an end (e.g. Sudan’s Military Coup) to democratic protests and experiences and attempts to contain Jihadist groups.