Tunisia’s 2019 Elections: Beyond the Islamists vs. Secularists Cleavage

The 2019 reconfiguration of political actors cannot be understood in terms of the traditional Islamists vs. secularists cleavage. Rather, the electoral results are rooted in the widespread discontent with the ‘governance by consensus’ model prevailing since 2011. The formation of a coalition government by former arch-enemies Nidaa Tounès and Ennahdha in early 2014 in the wake of a deep political crisis had indeed turned into a “rotten compromise” generating disaffection with a political elite overly focused on seeking consensus at the expense of translating revolutionary grievances into socioeconomic policies.

The 2019 elections have empowered new political challengers stemming from this discontent, which appear determined to provide an alternative political offer to the policy deadlock generated by consensual governance. Tayyar Dimuqrati, a proponent of an anti-corruption agenda, progressed from being the 7th to the 3rd biggest force in Parliament with 22 seats, while the People’s Movement, which focused on socioeconomic issues, jumped from 3 to 16 seats. With 38 seats, Qalb Tounès similarly called for new sustainable development policies and joined the many critics of the new trade agreement between Tunisia and the EU for the establishment of a ‘Deep and Comprehensive Free Trade Area.’

Most importantly, two newcomers, Itilaf al-Karama (Coalition of Dignity, 21 seats) and Hizb al-Rahma (5 seats), which have been hastily lumped together as ‘Salafi’ parties, have thrived with a programme emphasizing Ennahdha’s inability to implement the demands of the revolution due to its ‘politics of compromise’ with the ancient regime’s political forces. In particular, Itilaf al-Karama gathered together a heterogeneous public ranging from bloggers and journalists to independent Salafi sheikhs. Although its most conservative members blame Ennahdha for “imitating secularist parties” (interviews), Itilaf al-Karama does not present itself as a religious party. It instead built a trans-ideological platform giving priority to a sovereigntist agenda calling on Western powers to stop meddling in domestic politics and “bringing dignity back to Tunisian people” (interviews). It constitutes a coalition of ‘revolutionary’ forces whose gathering momentum lies in its refusal to allow the return of former regime officials. The coalition indeed strongly contests the ‘reconciliation law’ granting amnesty to prosecuted ex-Ben Ali supporters, which (most) Ennahdha MPs approved in September 2017.

Far from embodying a radical Islamist alternative to Ennahdha, the new coalition emerges as a contestation of Ennahdha’s compromising behaviour with the remnants of the authoritarian regime. The politicization of this new cleavage (compromising actors vs. hard-line revolutionaries), which was previously without a partisan basis, represents the main novelty of the 2019 legislative elections. 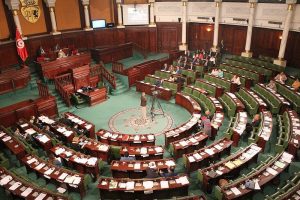 This new political cleavage is likely to structure politics for the next 5 years. Indeed, Itilaf al-Karama’s message is also shared by a substantial part of Ennahdha’s electorate and with president-elect Qais Said, who deemed the Islamist-secularist divide “an artificial struggle that diverts from the real social and economic issues.”

Therefore, analysts should not overly focus on Ennahdha’s ideological transformation as the primary cause explaining the rise of new political challengers but rather take into consideration the socio-political consequences of the ‘elite consensus’ that hitherto prevailed. This renders a possible Ennahdha alliance with Qalb Tounès too politically costly and leaves the door open for an alliance with Tayyar Dimuqrati, Itilaf al-Karama and Harakat al-Sha’ab. Renewed revolutionary demands, namely the side-lining of former regime figures and the centrality of socioeconomic issues, are thus most likely to constitute the core issues at stake for the new Tunisian political elite.

For more information on the Authors: