Speculations around the composition of the next Tunisian cabinet would not have waited for the final electoral results to abound. With a new president backed by no partisan structure and a fragmented parliament with no clear majority, the Tunisian political class is now faced with the difficult task to either build a solid ruling coalition or reach an all-satisfying compromise if it wants to avoid an institutional stalemate. While the elections have proved a challenging journey, the new battle for the government promises to be as complex and unpredictable as the electoral process itself.

Elected with an almost plebiscitary vote (72.7% of votes) which offers him a confortable popular basis and an undeniable legitimacy, Kais Saied will however not have a free hand to implement his projects. In a semi-presidential system where most of the executive power lies in the hands of a Prime Minister emanating from the parliamentary majority, the new President will have to cope with the fragmented parliament that came out of the ballot boxes on 6 October.

The 109-seats majority necessary for the government to obtain the confidence and to pass most legislation will be hard to gather as no party obtained enough seats to form a strong ruling coalition – not to mention a 2/3 majority to revise the constitution, an option Saied had mentioned in his campaign. This could prove even more complex that the new President, who ran as an independent, is backed by no political group represented in parliament, even though he received the support of various parties for the electoral run-off, ranging from Islamists to revolutionaries and pan-Arabists. Not sure though that all the components of this heteroclite group will be ready to work together in the new assembly.

The independent position of the president could however prove to be an advantage, by placing the new head of State in the position of an arbiter above party politics and partisan calculations. His conciliatory tone and the cross-ideological support he managed to gather around his candidacy could grant him the capacity to conciliate views that seem today incompatible. 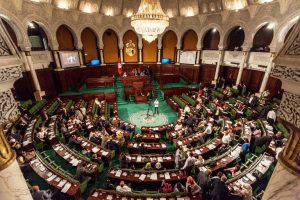 Possible options for coalition building are multiple, but few seem really convincing or realistic due in part to the scattered parliamentary landscape, but also to the more extreme positions adopted by the parties that will sit in the new chamber, compared to their predecessors in 2011 and 2014.

While Ennahdha, who came first in the legislative elections (52 seats), is now ostracized by most of the political class for its poor achievements in the successive governments, but will remain a key player in the political game, new-comers like the PDL (who openly claims Ben Ali’s legacy) or Al-Karama (radical revolutionaries) – respectively arrived third and fourth – could prove more uncompromising, thus rendering the negotiations to form a cabinet more complex. As for Qalb Tounes (Karoui’s party and second largest with 38 seats) the allegations of corruption that fall on its president and some of its parliamentarians make the new-born party a disreputable partner in any future coalition. Other centrist parties and the crowd of independents could weigh in the negotiations, but their support is far from granted, some having already set out strict conditions to their participation in a future cabinet.

A national salvation government – idea initially suggested by the Democratic Current – which would be composed of technocrats and based on a roadmap agreed by all parties, may offer an acceptable alternative to bring opposing parties to work together and a solution to circumvent the obstacle of parliamentary fragmentation. As Tunisia is entering a difficult period, in particular at the socio-economic level, this option could also compel the parties to share responsibilities that could be heavy to assume by one or a few parties alone. The inconvenient however is that it would perpetuate the consensual format of ruling known since 2011, while further preventing the emergence of a strong opposition – a rather unhealthy practice in a young democracy.

Although the political class seems aware of the danger of failing to form a government within the constitutional time limits (four months) – which could lead to the dissolution of the parliament and fresh legislative elections – the negotiations will be far from easy, and a compromise hard to reach. The electoral race is over, but another battle is already on the horizon in Tunisia.