Will Iran benefit from the assassination of Fakhrizadeh?

The assassination of Mohsen Fakhrizadeh, the long-time head of Iran’s nuclear and missile development programs, has set off a major debate on how country should respond. Top Islamic Republic officials, including Supreme Leader Ali Khamenei, have called for definitive punishment of those responsible. The Islamic Revolutionary Guard Corps’ Quds Force Commander, General Qaani, vowed to take revenge. And the Iranian parliament ratified a new law obliging the government to restart Iran’s highly enriched uranium program and limit inspections of Iran’s nuclear facilities by the International Atomic Energy Agency.

But Iran’s reaction is unlikely to be kinetic. Despite the calls for immediate revenge from hard-line factions, the government of President Hassan Rouhani perceives the assassination of Fakhrizadeh as a trap set by Israel, the almost-certain perpetrator, designed to provoke retaliation to disrupt resumption of diplomatic efforts with Iran under Biden administration. It is likely that the Rouhani administration succeed in in his ‘strategic patience’ policy and lie low for the time being to grasp whatever political and diplomatic opportunities created by the assassination. Iran’s parliament speaker, Mohamadd Bagher Ghalibaf, touched on this point and said, “It is the responsibility of all forces and organisations to turn this regretful loss into an opportunity to become stronger”.

The main reasons for Tehran following this likely line of action is that the assassination of Fakhrizadeh will have only limited consequences for the future of Iran’s nuclear quest if such a decision is made at the political level. This is because Iran’s defence sector has built-in resiliency and limited dependency on single actors. Tehran does not view the elimination of Fakhrizadeh as a game changer or a threat to its nuclear programme. Nor would see it as a reason to weaken Iran’s leverage in future negotiations with the US/E3. 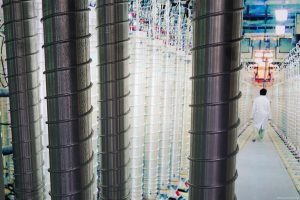 Fakhrizadeh became known when his management role in Iran’s AMAD project, aimed at design a nuclear explosive device, was revealed and reported by IAEA. As long as 2003, the military dimension of Iran’s nuclear programme under Fakhriadeh’s direction was taking place in the Defence Industries Training and Research Institute (DITRI), an Institute under the Ministry of Defense (MOD). The DITRI plays a vital project coordination role in Iran’s arms industry and procurement planning. The Chief project managers at DITRI are responsible for managing networks of military and civilian partners involved in developing specified weapon systems.

Fakhrizadeh was responsible for a coordinated network of R&D activities dispersed among the Atomic Energy Organization of Iran, the Aerospace Industries Organisation, the IRGC Research & Self Sufficiency Organization, the Institute for Research in Fundamental Science, and several civilian universities. The significance of Fakhrizadeh was not in knowledge of warhead design, although he did have expertise in this. Instead, he served as the nexus of the various organizations involved in nuclear and missile development. In this way, he had a profound knowledge of the Iranian leaders’ nuclear intentions and the actual state of progress towards developing a warhead.

His links between high-level military decision-making circles on the General Staff, the technical institutions and Supreme Leader’s office made him the best-informed figure on Iran’s nuclear ambitions. This intra-organisational oversight put him at the top of the IAEA’s list of individuals who they wished to interview about the past military dimensions of Iran’s nuclear programme.

In that context, there was considerable concern since late 2007, about the possibility that Fakhrizadeh would be abducted by a hostile power and forced to reveal sensitive information. Since then, the security apparatus around him was raised to highest possible level, according to sources close to him. Thus, his assassination might be relief to some in the Islamic Republic, even as it may constitute a serious blow to the IAEA’s efforts to confirm details of Iran’s progress in developing nuclear weapons until 2003.

In any case, Fakhrizadeh’s assassination is unlikely for several reasons to appreciably set back any possible future attempts by Iran to develop a nuclear weapon if Tehran decides to do so.

First, the DITRI and its affiliated centers across the MOD possess equally skilled project managers, most of whom are unknown to the outside world. The Institute has a successful record in coordinating multi-stakeholder weapon development projects, among them ballistic missile and Surface-to-Air Missile (SAM) programs. The progress made by Iran’s missile program despite the death of its manager, Hassan Tehrani Moghaddam in an explosion in 2011 underlines the institutional feature of the country’s defense sector. Indeed, it is a similar to what the Soviet Union experienced after the death of the Soviet ICBM programme Chief Designer Sergei Korolev. These incidents were never strategic constraints on the Soviet weapon programmes.

Second, there are uncertainties about the real status of Fakhrizadeh’s in the defense ministry, despite his latest official position as the Head of the Organization for Research and Innovation. The fact that he oversaw the AMAD project almost twenty years ago does not necessarily mean that he retained that position until his death, and no concrete evidence suggest that the project continued after 2003. Moreover, the assumption that Fakhrizadeh’s experience of AMAD program, will give him the chance to led any renewed attempt by Iran to develop a nuclear weapon ignores the existence of constant personal and institutional competition for plum positions in Iran’s defense bureaucracy. In 2007, for example, Fakhrizadeh’s candidacy for the deanship of MOD University was defeated by rivals. Besides, there is high possibility that coordination of any future military nuclear program take place in DITRI rather than newly stablished organization that Fakhraizadeh was heading.

Aside from factions in the hard-line camp, there is no consensus in immediate response. Fakhrizadeh was far less well-known than Qasem Ghasem Soleimani, the Quds Force Commander in Chief assassinated by a U.S. drone strike in Baghdad last January. Moreover, most of the country is far more preoccupied with coping with the desperate economic situation and the COVID-19 pandemic. Though the assassination constituted an important loss of intelligence credibility for Islamic Republic, the lack of widespread public pressure and political fight over response strategy provides the government with more time to consider its options.

Tehran will probably calculate that restraint from military retaliation is more advantageous at this stage. It will boost Iran’s moral standing. With the exception of Saudi Arabia, the Arab Gulf states, including the United Arab Emirates and even Bahrain, have condemned the assassination, no doubt in part because it arguably brought the region to a “moment of mass destruction” in which everyone had a great deal to lose. By acting in a “responsible” manner, Iran aimsto promote détente with its smaller Arab neighbours. This is a rationale that Tehran will try to leverage the smaller Arab countries attitude to open a new political space. By signalling that they, too, could be caught up in a wider conflict and then joiningtheir call for collective efforts to avoid escalation, Tehran has shown how it can take advantage and hopefully ward off other aggressive moves against it before Biden takes office.

Moreover, Rouhani’s government stands to benefit from a rising internal polarisation in the course of negotiations with Biden. While reformists and pro-dialogue groups see the incident as creating a necessity to talk to the new Biden Administration, the frustration and anger among hardliners is making calls for no-talk with the US louder. Even current hardliner parliament law might in the end add to Rouhani’s leverage in talks with the US. Such an internally polarised environment resembles the time of the JCPOA negotiations, when Iranian negotiators used internal opposition as a tool to gain an advantage over the American side. The assassination may make this tactic relevant in the anticipated US-Iran talks.

For much the same reasons, the assassination and the uncertainties created by it should prompt the European Union and other international actors to work harder to deescalate tensions in the coming weeks.  Already, appeals for the EU to take a stronger role are gaining attention, while the next  JCPOA joint commission meeting December 16 will offer an opportunity for broader efforts involving Russia and China to stabilize the situation and avoid provocations pending President-elect Biden’s assumption of power January 20. To the degree that the remaining powers to the nuclear deal are seen as actively pressing Israel and Saudi Arabia to avoid any further provocations against Iran, the pro-dialogue forces in Tehran are likely to be strengthened.

The next days and weeks will be critical in Iran and peace in the region. Whether Rouhani’s government can sustain its strategy of pragmatism and openness – or whether the combination of hard-line forces in Tehran, Washington, and Riyadh will further escalate tensions lies in the balance.

* Abdolrasool Divsallar is an expert on Iran’s security policy. He co-leads the Regional Security Initiative at the Middle East Directions Programme of the Robert Schuman Centre for Advanced Studies at the European University Institute (EUI). He is also a Policy Leader Fellow at the EUI School of Transnational Governance.