Do migrants contribute to innovation in the European Union (EU)? MPC’s recent report[1] attempts to answer this critical question. To measure innovation, our research focuses on migrants’ contribution to patents registered at the European Patent Office. The preliminary results point towards a positive role played by migrants in promoting innovation.

What is innovation and why is it important for the EU?

According to the European Commission, innovation is defined as “the successful production, assimilation and exploitation of novelty in the economic and social spheres.”[2] Its importance is underlined in the European Council’s Lisbon Strategy[3] which highlights that innovation is important for promoting economic growth, an argument which is supported by the Europe 2020[4], the EU’s growth strategy. Moreover, EU’s Global Approach to Migration and Mobility[5] (GAMM), through the ‘EU Blue Card’ Directive[6], provides one of the key policy tools to promote the migration of highly skilled workers in to the EU.

Innovation: How to measure it?

The recognition that innovation and technical change are amongst the key components of economic growth has pushed economists to look for appropriate indicators. However, measuring innovation is a difficult task since it is a multi-faceted phenomenon. One of the most popular indicators of innovation is the number of patent applications at industry or country level[7] (e.g. Furman et al. 2002). For the purpose of the study, we attempt to assess migrants’ contribution to theincrease in patents registered at the European Patent Office.

Why are patents important in measuring innovation? Patent data are considered an important indicator of innovative activity as they reflect the technological effort of companies and non-firm organizations aiming to create new products and processes. In research, patents are used to approximate the innovative capacity of countries. Contrary to previous analyses which used a territorial cross section approach and a diversity index, we analyse the innovative capacity at sectoral[8] level and explore how it is affected by the characteristics of human resources and their demographic trends.

The three case countries chosen for the analysis are UK, France and Germany. Though all three are counted amongst the top three economies in Europe, however, they differ in three key categories. Firstly, they differ in their age pyramid, as seen in the case of France, where the young-age population (below 15 years) is 1.35 times the old-age population (above 65 years), while in Germany and the UK the young-age population is smaller than the old-age population (0.85 times and 0.89 times respectively). Secondly, these countries also differ in their dominant production sector. In the UK, the service sector dominates the economy (75% of added value); while in Germany the manufacturing sector has 29.3% of added value. However, in the diverse economy existing in France, it is interesting to note that the agriculture sector still contributes up to 2.8% of added value. Finally, in terms of immigration, all the three countries have a long history of immigration and migrants make up between 11% and 8% of the population. However, they have different migration policies: the UK encourages immigration of the highly skilled labour, while both France and Germany have a tradition of allowing low to medium-skilled migrants and family reunifications.

Our analysis includes four variables: age, level of education, type of occupation, and the distinction between migrants and natives.  The three figures below show different national composition and trends of the patents and migrant shares by education and age. 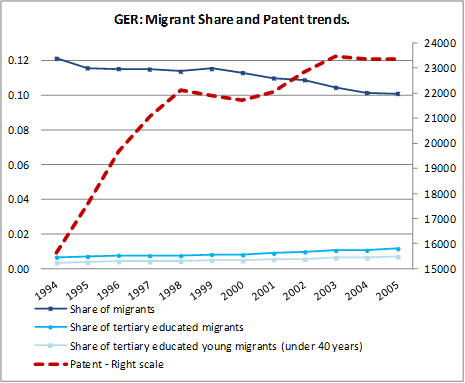 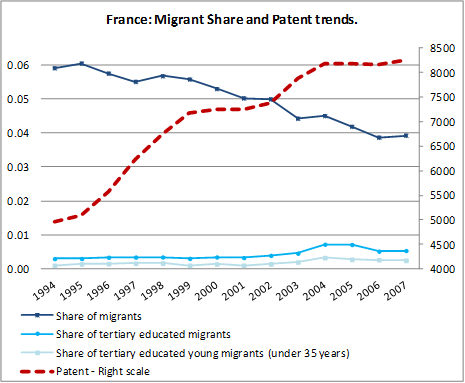 The preliminary results of the research[9] suggest a positive correlation of highly skilled migrants and innovation, i.e., highly skilled migrants tend to favour innovation as revealed by an increase in the number of patents. However, the impact of the highly-skilled on one side, and the low-skilled on the other side, varies between migrants and natives. Also, the age composition of the labour pool plays a different role. The results indicate that both the young and old workers are spurring innovation but the results are not homogeneous and differ according to the country specificity.

In the UK, innovation is generated mostly by highly-skilled migrants who are in a more advanced phase of their working life. However, highly-skilled young[10] migrants and low-skilled older natives also contribute to innovation.

In France, innovation is stimulated by both highly-skilled natives and low-skilled migrants; it is especially promoted by the young population in both categories. However, older migrants also contribute to innovation.

Finally, in Germany, both the highly-skilled and low-skilled migrants (especially those who are older) play a positive role in innovation along with low-skilled natives. Furthermore, data suggests that natives favour innovation when they are young.

Please note that the results presented are preliminary as the positive impact of highly-skilled workers, both native and foreign, is limited inside specific sectors. Thus, the result underestimates the total positive effect of human capital changes as the complementarity between sectors and the positive spill over are not taken into account.

Note: The above commentary is a summary of MPC’s Research Report 2012/11 ‘Are migrants spurring innovation?’ by Alessandra Venturini, Fabio Montobbio and Claudio Fassio. To read the complete report, please visit: http://www.migrationpolicycentre.eu/docs/MPC%202012%20EN%2011.pdf

[8] The effect of immigration (of skilled and unskilled migrants) on innovation is measured at the sectoral level, in three EU member states (UK, Germany and France) in the period 1994-2007. Sectors are defined at the two digit level of NACE classification.

[9] The results of the research are preliminary using a production function of the innovation in the manufacturing sectors (measured by patents registered in each country-sector explained by openness to trade, physical capital, expenditure in research and development, the previous stock of patents, and human resources).