Labour Emigration from the EU’s Eastern Neighbourhood: How to get the numbers right?

EU’s Global Approach to Migration and Mobility (GAMM) highlights the importance of evidence-based policymaking which, in turn, depends on the accurate measurement of migration in the EU and its neighbourhood. This short piece gives a brief insight into the problems associated with statistical data collection on labour emigration from the EU’s Eastern Neighbourhood to the EU and the need for its reform.

EU’s Global Approach to Migration and Mobility (GAMM)[1] highlights the importance of evidence-based policymaking which depends on the accurate measurement of migration in the EU and its neighbourhood. The knowledge tools included in GAMM – such as mapping instruments, impact assessments and migration profiles – need credible sources of data on migration to enable policymakers to make informed decisions.  In the EU’s Eastern Neighbourhood[2] (hereafter, referred as the ‘region’), statistics on labour emigration are usually derived from administrative sources, which have remained largely unchanged since their creation in the post-Soviet era. The other sources are represented by specific one-off small-scale surveys conducted by governmental or international agencies.

Main challenges with the statistical data collection on labour emigration

Graph 1: Arrival and departures of labour migrants from and to Belarus on the basis of official labour contracts and agreements (1994-2011) 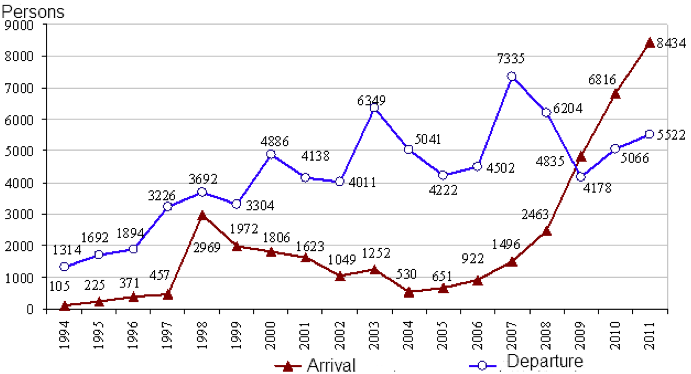 Moreover, administrative sources do not capture migrants at the destination point. It is often the case that in the semi-open border regimes (as is the case in the EU and CIS[6]) circular migrant workers do not apply for work permits, especially if performing seasonal or temporary work. Therefore, there movements are lost in the administrative statistics. For example, Belarusians do not need a work permit to work in the Russian Federation, and thus, they are simply absent from the statistics (as depicted below in Graph 2). Similarly, the number of permits issued to Moldovan labour migrants in Russia is below estimations (if compared for example with the Moldovan Labour Force Survey). 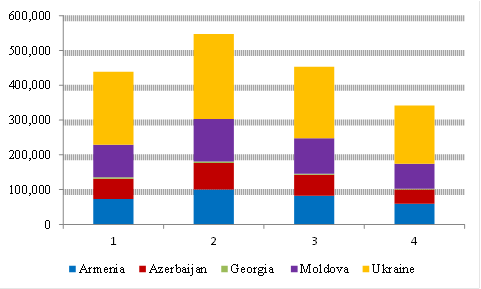 *Notes: Migrant workers from Belarus are not included in the statistics as they do not need work permits in the Russian labour market in accordance with the Agreement between Belarus and the Russian Federation on the establishment of the Interstate Union.
Source: Federal Migration Service (FMS), Russia. For more details, visit CARIM-East database www.carim-east.eu

Finally, administrative sources have complicated procedures and contradictory legal norms.  For example, in Armenia, the Population Register only provides for the possibility of registration at a place of permanent residence (de jure population) but excludes the possibility to register at a temporary place of residence (de facto population). Due to the complicated procedure of registration and de-registration, migrants do not have any incentive for complying strictly with the rules of registration. This primarily means a significant underestimation in emigration and immigration flows. Similarly, in Russia, the absence of a legal time criteria makes it difficult to separate temporary stay from permanent residence. This implies that large numbers of immigrants prefer to register as temporary migrants (i.e. in their place of stay), though the duration of stay may last several years. Unfortunately, temporary migrants’ registrations are not processed by official statistics, implying that their numbers are unknown.

It is clear from the above discussion that the statistical data collection system in the region is in need of urgent organizational and structural reform with functional expansion, better financial support and more human resources. More specifically, the following reforms should be implemented:

Please Note: The above discussion is drawn from MPC’s explanatory notes on ‘Statistical Data Collection on Migration’. To read the detailed notes, visit: http://www.carim-east.eu/publications/explanatory-notes/statistical-data-collection-on-migration/

[2] For the purpose of this paper, the analysis of the EU’s Eastern Neighbourhood includes Russia, Armenia, Belarus, Ukraine, Moldova, Georgia, Armenia and Azerbaijan

[5] CARIM-East is part of the Migration Policy Centre (MPC) and is the first migration observatory focused on the Eastern Neighbourhood of the European Union. The project covers all countries of the Eastern Partnership initiative (Belarus, Ukraine, Moldova, Georgia, Armenia and Azerbaijan) and the Russian Federation www.carim-east.eu

[7] The Eastern Partnership Initiative (EaP) is an institutionalised forum between the EU and the post-Soviet states: Armenia, Azerbaijan, Belarus, Georgia, Moldova and Ukraine