There are many populist myths surrounding migration. One that is commonly shared is migrants moving, en masse, into so called ‘richer’ countries irrespective of the job market. The rationale follows that with more immigrants rising unemployment ensues. To date there is no strong evidence to support such claims. Contrary facts highlight a lack of evidence to such assertions. A basic and telling example is a simple pair of correlations which highlight the relationship between overall immigration levels and unemployment. Each EU country with sufficient data has two correlations; pre-recession and recession. Although correlations cannot claim a causal link between two events (A causes B), what they can do is signal any potential links between two phenomena. In this case there is a clear, consistent and telling set of trends. 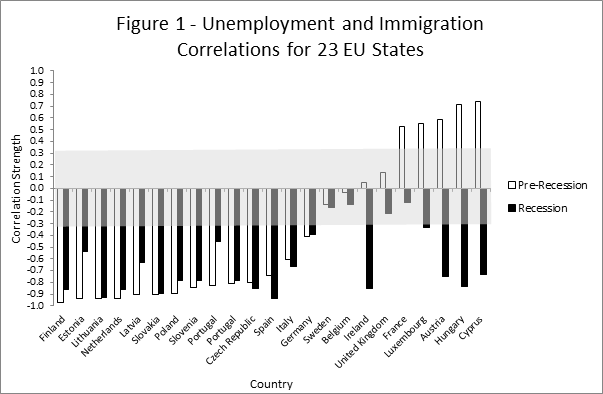 Germany is an important and ‘average’ example of negative correlations in both pre-recession and recession times, with all results baselined to quarter 1 of 2012. In both time periods when there is a decrease in unemployment (red line) there is an increase in immigration. 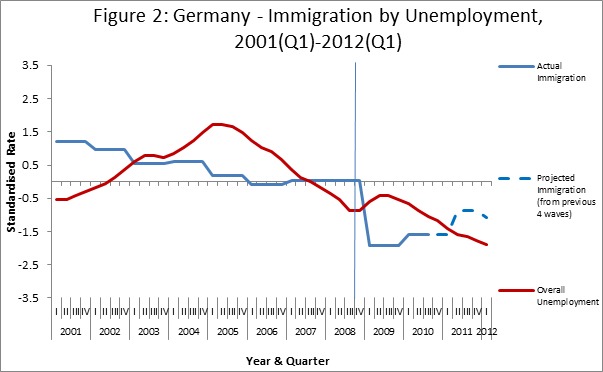 In the case of France (figure 3) there is a fairly consistent trend in the immigration levels, with fluctuating levels of immigration. However when the recession took place the levels of unemployment and immigration took an interesting turn – unemployment rose, immigration fell, a negative correlation. 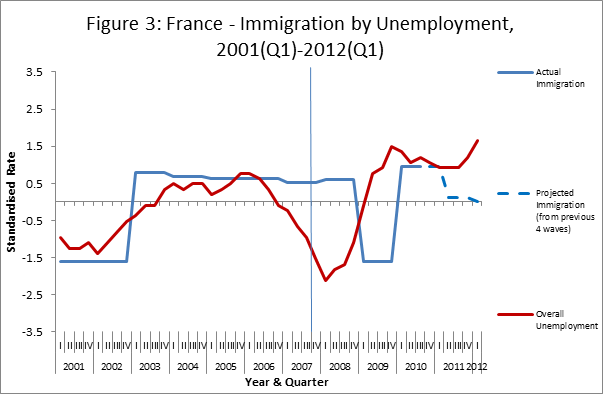 There are many examples of more in-depth studies that highlight very similar results to the ones above (see ‘’ The Labor Market Impact of Immigration and its Policy Consequences’ by Herbert Brücker – http://www.migrationpolicycentre.eu/docs/MPC%20ASN%202012-04.pdf. Although it must be noted that Brucker’s paper includes emigration as well as immigration). Although no definitive answer can be found by correlation analysis it is clear that there is a very consistent and telling trend in the relationship between unemployment and immigration. When unemployment lowers, immigration tends to increase. Results from this analysis suggest that immigration cannot be regarded as a factor that creates or adds to unemployment. In fact the opposite conclusion is more plausible; migrants are likely to move to where jobs are available, especially since the recession took place. A recommendation for policymakers is to utilise immigration to stimulate to employment. For example, if unemployment rates are lowering, nation states should look to increase the rate and number of immigration. Furthermore, a continual populist myth of ‘high immigration = high unemployment’ needs to be responsibly tackled by the media, especially when there is little to no evidence supporting such claims. Unemployment and immigration are complex phenomena but it looks like the relationship between the two has a simple rule of thumb – low levels of unemployment create higher levels of immigration.

The views expressed by the author are not necessarily the views of the Migration Policy Centre.