James Dennison and Stuart Turnbull-Dugarte May 2nd, 2022
A- A A+

In a recently published article in Political Psychology, we show how and why public populist attitudes affect threat perceptions of global transformations such as climate change and migration, and global governance solutions to them. Contrary to received wisdom, our findings suggest grounds for cautious optimism about the potential to rally popular support for global governance solutions to global challenges.

Global social transformations such as climate change and migration increasingly determine our lives and, as such, democratic politics and policymaking. The inability of single nation states, still widely seen as the legitimate and natural tool for solving societal problems, to deal with such transformations has lent credence to the views of some citizens that political “elites” and transnational institutions are corrupt, treacherous, or incompetent. Indeed, numerous national party systems have been transformed as voters have increasingly coalesced around parties according to their perceptions of global transformations, with so called populist parties often gaining the most by highlighting the threats posed by global transformations.

Populist parties have been extensively studied, but less is known about the effects of public populist attitudes—beliefs that society is divided between a “pure people” and “corrupt elite” and that democracy is about expressing the former. Populist attitudes could affect the threat that people perceive as a result of global societal transformations because (1) they are beyond the control of “the people” and so a source of change, disturbance, anxiety and, therefore, societal threat and (2) their global nature may usher in global governance, such as binding treaties or cession of powers to supranational institutions, at odds with the will of the people and dependent on deliberation, compromises and technocracy, and so a threat to the expression of the popular will. Moreover, global transformations may be perceived as threats to distinct objects—cultural, economic, or moral—to varying extents.

We test the two propositions stated above using original survey experimental data in India and the United Kingdom, chosen for their  geographical, cultural, historical, and economic different, resulting in divergent experiences of global transformations. To measure populist attitudes, we use five questions that have been used in previous studies of public populist attitudes. We measure threat perceptions of six global transformations: migration, climate change, digitalisation, pandemics, financial and economic integration, and terrorism. Crucially, these include typically right-wing and left-wing concerns. We ask respondents to what extent they see each transformation as a threat to, respectively, their national economy, way of life, and to humanitarian concerns such as loss of life.

Because we are not only interested in how populist attitudes affect threat perceptions, but also why, we include an experimental component whereby all respondents receive information about each transformation but only half receive additional information about forms of global governance designed to deal with the transformation. For example, all respondents read that ‘International migration has increased over time, from around 84 million international migrants in 1970 to 272 million in 2019. The global population of refugees— individuals forced to leave their country— has risen from around 2 million in 1960 to around 30 million in 2020.’ Only half additionally read that ‘In response to rising global migration, some say that countries should agree to international agreements, such as the Global Compact for Migration, that agrees how migration should be governed and what states must do to ensure the well-being of migrants’. Our surveys also include a range of socio-demographic and political attitudinal variables, such as left-right self-placement and nationalism.

In Figure 1, we can see that, when controlling for a range of potential confounders, in the UK, populist attitudes are generally positively associated with perceived threats, especially to the economy and national way of life, but to a lesser extent notably to humanitarian concerns, as posed by a wide range of global transformations.

Figure 1: Modelling effect of populism on perceived threat of transformation to: the UK’s economy, national way of life, and humanitarianism (UK) 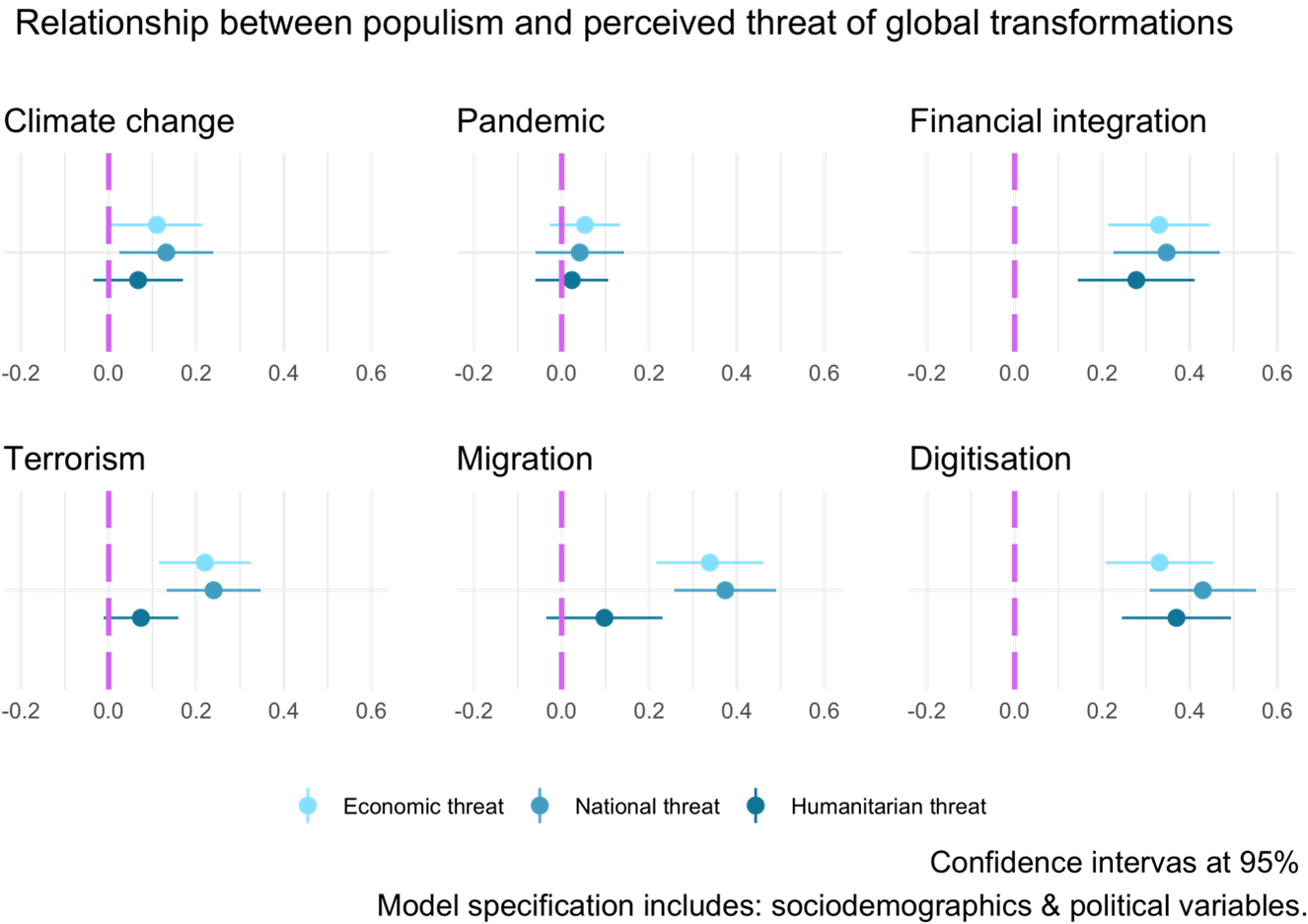 In Figure 2, below, we observe that the positive relationships are even more consistently found in India. 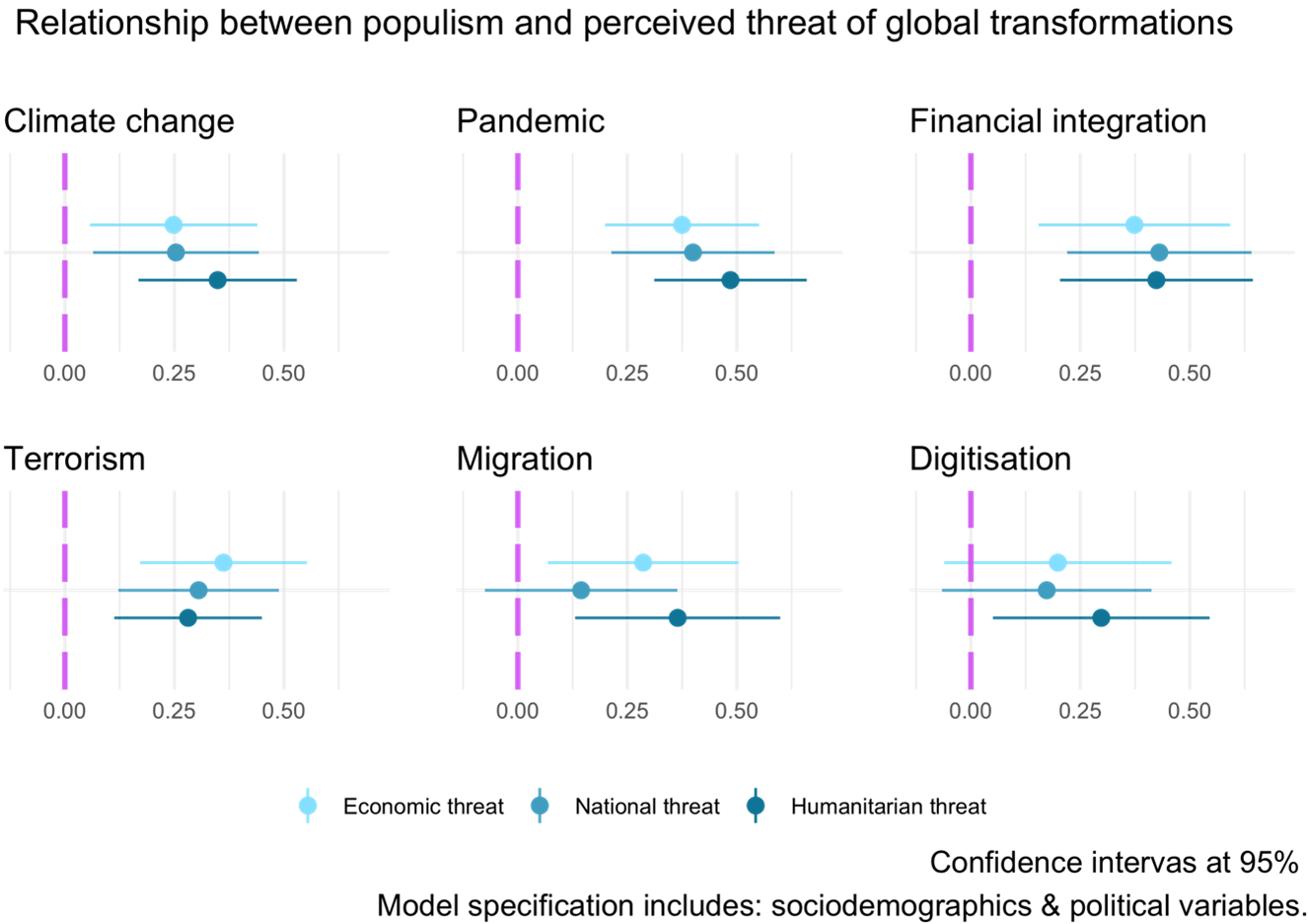 In Figure 3, below, we consider our experimental evidence from the United Kingdom. Notably, the treatment of providing information about global governance responses in addition to information about the global transformation does not have strong or consistent effects on threat perceptions either among the entire sample (top panels) or amongst those with, respectively, strongly or weakly populist attitudes (bottom panels). 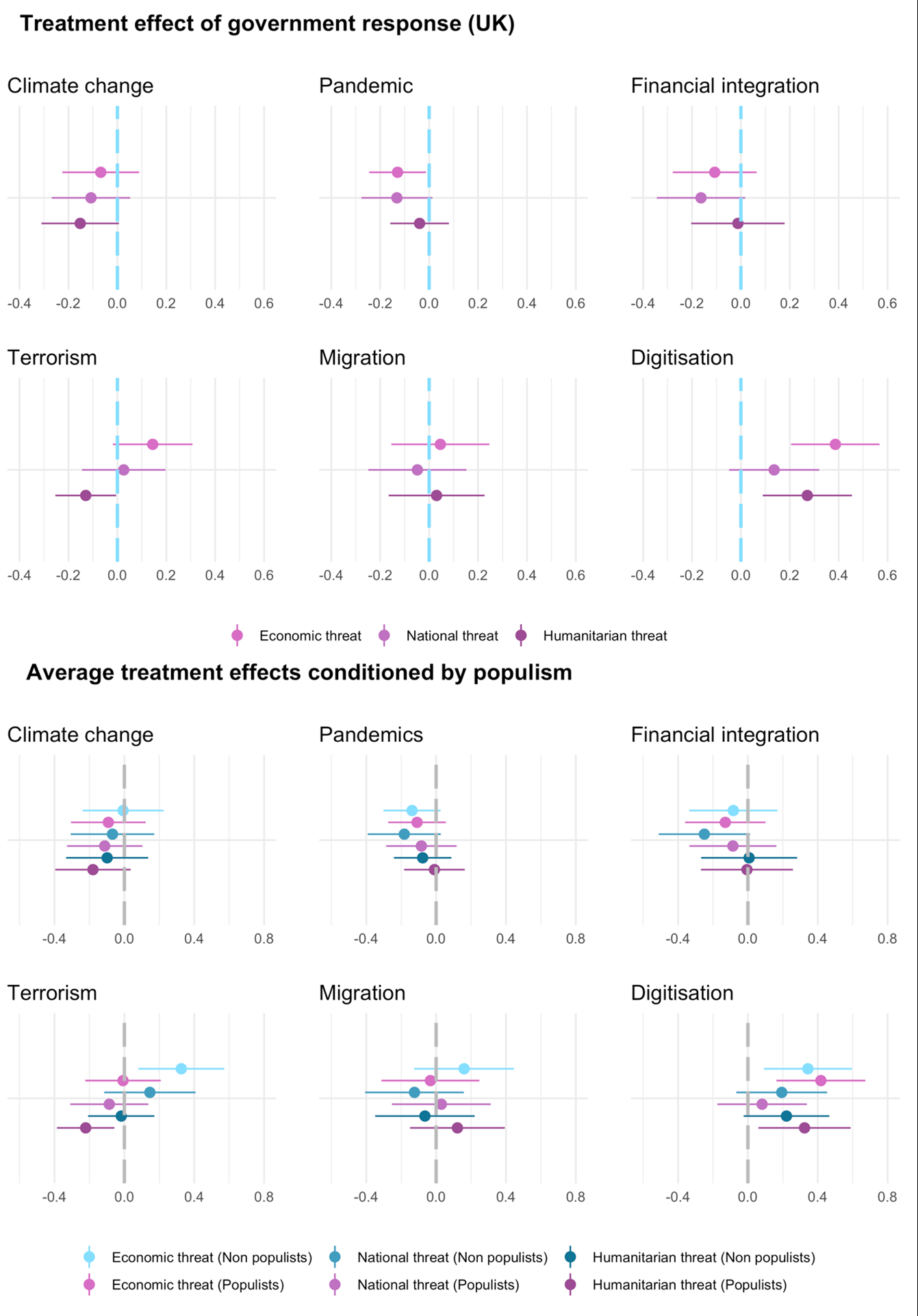 As shown in Figure 4, below, in India we see that the treatments tend to have a negative effect of threat perceptions (top panel) but that there is no difference in this negative effect between those with higher and lower populist attitudes. 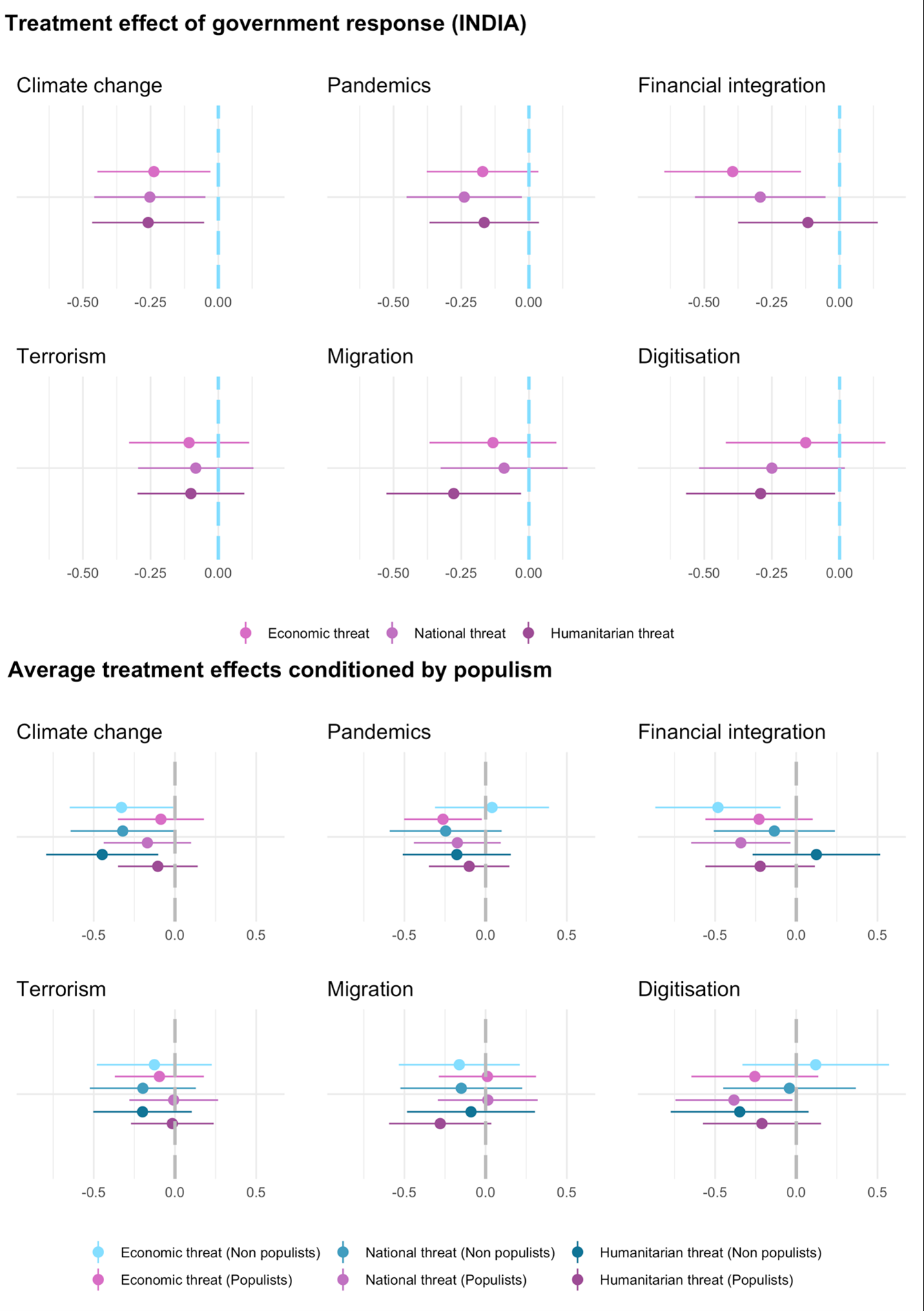 Overall, our findings generate four insights. First, we provide original evidence of distinct types of threat perceptions posed by six global transformations across two distinct national contexts. Our finding that populist attitudes are positively associated with the perceived threat of all six types of transformations supports the ideational conceptualisation of populism as a thin ideology that is distinct from nationalism and neither inherently left- nor right-wing and the psychological conceptualisation of populist attitudes as a political predisposition that affects more context-specific attitudes and behaviours.

Second, we highlight the distinction between the demand- and supply-sides of populism, with the latter typically inseparable from a host ideology.

Third, individuals vary in the level and type of threat perceptions posed by global transformations according to their populist conception of society because being global and ‘foreign’, such transformations are likely to usher in unwanted disruptions and challenges for ‘the people’, which remains fixed, untainted, and monolithic in the populist mindset.

And, finally, but perhaps most significantly because our experimental findings show that the possibility of global governance solutions to global transformations do not increase the level of threat felt by more populistic individuals (or anyone). We suggest that populistic individuals’ sense of threat is rooted in the societal change itself, rather than potential political consequences such as loss of sovereignty. We cautiously argue that this may give cause for optimism about the potential to rally popular support for global governance solutions to global challenges.