This post is part of a series of pieces analysing the preliminary findings of an ongoing SenseMaker survey conducted by Citizens Take Over Europe to gauge public attitudes on the Conference on the Future of Europe.

The Conference on the Future of Europe (CoFoE) is taking place during a crucial moment: on the one hand the EU is confronted with global challenges that can only be solved collectively. On the other, it faces ongoing critique regarding its democratic deficit and a growing demand for more participation from citizens. Both coincide with the recent ‘deliberative wave’, in which EU member states are experimenting with different forms of citizens’ participation.

Many observers believe CoFoE can be an important participatory instrument for addressing the grievances of EU citizens and including them in decision-making. The Conference enables citizens from diverse contexts and backgrounds to share their visions on the EU’s future and thereby build mutual trust. But this experiment is not only a potential mechanism for building social trust between the pouvoir constituants (citizens of member states). It can also foster political trust between the pouvoir constituants and pouvoir constitué (political representatives).

If successful, the Conference can function as a (temporary) transnational public sphere, bridging the transnational distance between member states’ citizens and vertical disconnect between citizens and politicians – and ultimately strengthen the democratic legitimacy of the EU by including citizens in the decision-making process.

In light of this, it is important to find out what expectations citizens have regarding CoFoE. Citizens Take Over Europe, a coalition of civil society and scientists, has therefore conducted interviews with citizens asking them what their “hopes” and “fears” for the Conference are, and what their preferred forms of participation would be. 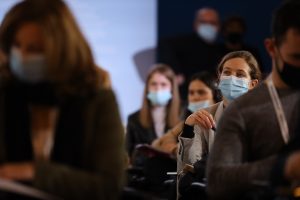 Citizens participated in the panel on ‘European democracy / Values, rights, rule of law, security’ in Florence on 10-12 December 2021. Image: All rights reserved.

Citizens’ Hopes and Fears for the Conference

The quantitative data (1,628 responses) shows that a majority of respondents wants to participate in the agenda-setting process (1.021 = 62,7%). The main reason for this preference could lie in the fact that most respondents are politically active in civil society, aware of how the policy process works and therefore view influencing agenda-setting as more promising. But the quantitative data doesn’t shed light on the specific ways in which respondents want to be included, and the hopes and fears they associate with CoFoE.

Thanks to the additional qualitative data provided by the SenseMaker method we have the opportunity to consider deeper implications from the responses. The analysis shows that most respondents want to be involved through participatory instruments, such as working groups, citizens’ panels or thematic surveys; which should be disseminated throughout CoFoE. They envision a collaborative process of drafting policy recommendations with other EU citizens, ensuring their voices are heard and improving existing proposals. Respondents perceive themselves as capable of working on solutions for complex problems and thereby offering valuable input to improve the quality of policy-making.

A majority of respondents hopes that CoFoE will be an inclusive process in which citizens have a real chance of influencing the future of Europe. According to them, discussions amongst EU citizens should lead to greater mutual understanding, help enable solutions for shared problems and bolster a European identity. Respondents therefore appear to view the citizens’ panels as “social trust building mechanisms” that bring citizens from different member states together and lead to shared goals. In their view, the democratic experiment of CoFoE should eventually lead to treaty change that strengthens the EU and makes it more democratic (e. g. stronger European Parliament, participatory instruments).

Interestingly, the respondents’ fears mirror the aforementioned hopes. Approximately half are concerned that “nothing will happen” and that CoFoE will merely be a “talking shop.” They fear there will be no adequate follow-up, it will be non-binding or focus on aspects that leave the current power-structure intact. This seems to indicate a lack of political trust and also points to CoFoE as a potential “political trust building mechanism.“ While CoFoE exhibits certain features that are conducive for building social trust between citizens, and political trust between citizens and politicians, the possibility that this experiment could also undermine valuable trust cannot be disregarded.

The Conference as a ‘Transnational Trust Building Mechanism?’

The citizens’ panels and multilingual platform are particularly important instruments for fostering social trust between EU citizens. Both enable citizens to exchange their visions on the EU’s future, create mutual understanding and uncover shared goals. The direct exchange between citizens and politicians can enhance political trust, enabling better insights regarding the complexity of political decision-making or the everyday problems of citizens and how they are affected by policies. The randomized selection of citizens and inclusion of young people in this process can strengthen political trust by including the perspectives of marginalized and “politically distant” groups. This can increase their self-efficacy and perception of being heard.

To fully utilize CoFoE’s trust building potential, citizens need sufficient time to share their visions openly and conduct in-depth discussions on topics. But these capabilities for “social trust building” are hampered by the shortened timeframe and topic overload of citizens’ panels, which seriously affect the quality of deliberations. Reducing the timeframe due to political reasons (inter alia Macron’s re-election campaign) undermines political trust, as it calls into question the seriousness of the process and the influence of citizens proposals. Adding to this, EU institutions have – to this date – not agreed on the follow-up to CoFoE. This lack of clarity undermines political trust, as citizens do not know whether or how their efforts are taken into account. This uncertainty mirrors the fear of CoFoE being merely a “talking shop.”

Making the Conference a Success

The qualitative responses show that the hopes and fears of citizens are tightly interlinked and two sides of the same coin. As with a coin toss, both outcomes seem likely: CoFoE strengthening political trust in the EU and social trust between citizens – or undermining both. At the same time, this survey shows a path for making the Conference a success. When the process is inclusive and citizens have sufficient time for in-depth discussions, CoFoE can utilize its social trust building capacities. When expectations are made transparent and accompanied by an adequate follow-up, it can function as a political trust building mechanism. By living up to these high standards, EU institutions would not only show their willingness to “rule for the people,” but also their intention to “rule with the people.” Politicians could build upon the positive experiences of CoFoE, gain trust in citizens’ capabilities and more actively involve them in future decision-making. Together with the European Citizens’ Initiative, a Permanent Citizens’ Assembly could institutionalize a transnational trust building mechanism that gives citizens a bigger say in the EU’s future.

Daniel Alexander Davis, M.A., is a doctoral student and lecturer at the department of Comparative Politics and European Integration at the Institute of Political Science (University of Tübingen). His PhD thesis and research focuses on European Integration, the Multi-Level Governance of the European Union, as well as questions of democratic legitimacy, political participation and civil society representation.