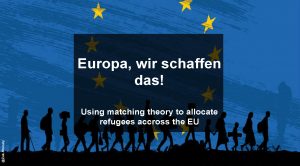 ​​Matching theories have been proven successful in various policy areas. Most notably, Alvin Roth was awarded the Nobel Prize in 2012 for his use of matching theories in “markets without prices” which enabled organ donors to be matched with transplant patients, students with universities,  and resident doctors with hospitals. Could the holy alliance between technology and matching theory help alleviate a humanitarian catastrophe caused by the current refugee crisis?

The European Union’s (EU) asylum policy is ineffective in times of emergencies, one-sided in terms of process, and undignified for asylum seekers. Yet, the coordinated response to the Ukrainian war demonstrates potential on the levels of governments, businesses, and citizens. The EU activated its Temporary Protection Directive (TPD) in a historic precedent to settle the question of legal rights for Ukrainian refugees in Europe, while states outside the EU are expanding their matching systems as a hybrid policy that addresses humanitarian and economic policies. Other states with no direct border with Ukraine such as Canada lifted visa restrictions for Ukrainian citizens and presented them with a similar policy to Europe’s TPD. What can the EU learn from Canada in dealing with refugees?

Unfortunately, the TPD alone does not solve the EU’s asylum quagmire since Poland’s public services and hosting capacity is reaching its limits, and the topic of redistribution will return to the agenda. Canada’s model of “sponsor a refugee” allows private groups such as communities to sponsor refugees through a matching system. Matching theories have the potential to soften the humanitarian crisis and to allow states time for a coordinated response. In fact, various EU regions and cities already started community sponsorship schemes but only covers family unification and faith-based organisations. Matching systems have also been used by businesses such as Airbnb for Refugees which allows landlords to host refugees and LinkedIn’s scheme to match refugees with local companies. Moreover, local initiatives to host refugees by citizens demonstrated the capacity of such an approach. Most notably, two students already created an open platform for matching Ukrainian refugees with citizens willing to host. Unfortunately, joint-EU resettlement efforts by European countries failed to effectively resettle more than 66 thousand refugees since 2015. Compared with the expected millions of Ukrainian refugees in the EU, the need for reform is urgent.

Using matching theory means that not every refugee will get their first choice, but most will be resettled somewhere safe. My proposal is to create an EU-level matching service for refugees to bring about immediate and effective outcomes to soften the humanitarian crisis in Ukraine. It is to note that matching theories have not fully reached the field of selecting refugees and many issues need to be addressed, especially to ensure the safety of hosted refugees. This is why the EU needs to support its citizens in providing the necessary tools for verification, allocation, and logistics.

Matching systems seek to find an optimal allocation of two (or more) sides given their preferences and taking logistical, legal, and political constraints into account. This way, the two-sided matching system acts as a matching market where refugees can express preferences over Member States based on family, academic, or professional ties, while states can manage the refugees they admit to match their citizens and set quotas. Right now, the problem is that refugees have no choices, and states have no control, but Refugee Match can help both. Indeed, the hard part remains to convince states to offer settlement places, and for refugees to apply if the quotas are too small.

On implementation, refugees could submit their preferences and rank their options within the EU either directly or in coordination with the United Nations High Commissioner for Refugees (UNHCR). Thus, states can rank refugees based on a combination of general variables (age, language skills, waiting period) and personal ones (family ties, children, and maybe cultural affinity). It is a question of designing the algorithms and the criteria, given the constraints.

Such a reallocation system allows both states and refugees greater choices to achieve a match that fits their preferences. In addition, it ensures that the selection process is less arbitrary as citizens must submit their criteria to a computer system, which will make them more transparent. Most importantly, it safeguards the agency and dignity of asylum seekers in resettlement and ensures a better outcome both for the host community and the refugees.

Zakaria Al Shmaly is a Syrian academic who writes about the intersection between governance and technology. He worked with humanitarian and international organisations such as the International NGO Safety Organisation, Norwegian Refugee Council, and the European Parliament. He holds a BA in Liberal Arts and Sciences (Freiburg) and an MA from the European University Institute (Florence), and is currently a Dahrendorf Fellow at Oxford University.