Europe’s youth is far from apolitical

Contrary to stereotypes, under 30s are, in fact, dismantling the traditional definition of politics to focus on the public sphere, lead transnational justice movements and shift the terrain of conversation with representatives. By doing so they are innovating new ways in which institutions and governments can better serve the needs of the European electorate.

During her State of the Union Speech last year the EC President Ursula von der Leyen declared 2022 the “European Year of Youth” to honour the sacrifice young people made during the Covid-19 lockdowns. This acknowledgement, made against the backdrop of the ongoing pandemic and the looming economic crisis, also coincided with the COFE citizens’ panels, in which under-25’s made up one-third of participants. The question therefore follows: are young people now being properly included in the conversation about the future of Europe? Or, despite all these efforts, are they still disinterested in – and marginalised from – European politics?

In this article I’m going to disprove the long-held assumption that youth are apolitical or disengaged by arguing that, first, current trends actually demonstrate a spike in voter turnout among youth people; second, that (transnational) digital activism is on the rise; and third, that our definition of politics needs to be extended to encompass non-electoral forms of youth participation. Through these examples, I seek to paint a more in-depth picture of how young people engage politically and to share a few best practices in light of the next European elections. 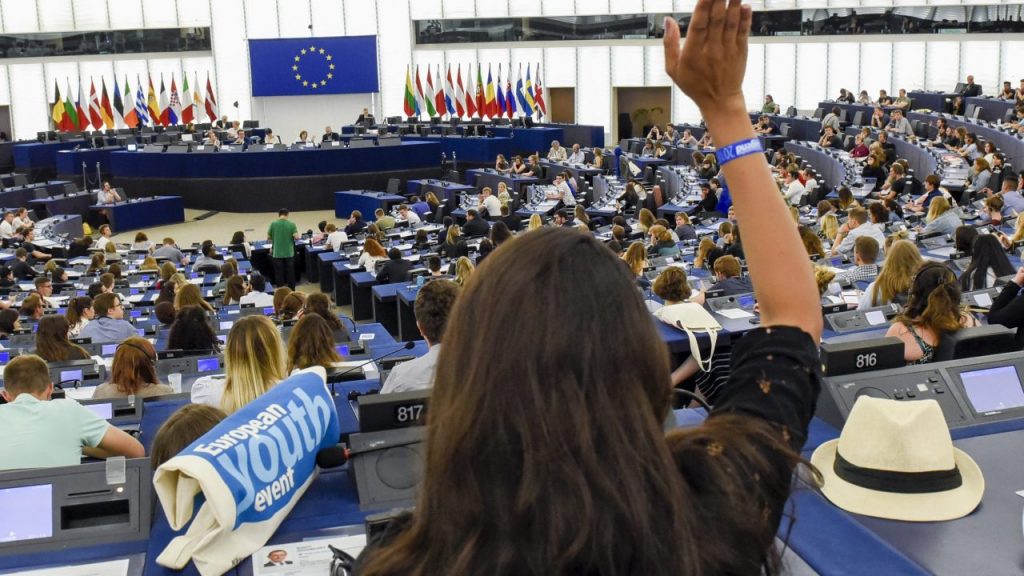 I: Current trends and lessons from the last EP elections

In the recent U.S. midterm elections young people came out to vote with the second-highest turnout of the last 30 years, thereby preventing the Republicans from winning their widely-anticipated ‘red wave.’ The Center for Information and Research on Civic Learning and Engagement (CIRCLE) at Tufts University estimates that 27% of youth (aged 18-29) cast a ballot and that they were particularly influential in the battleground states.

We can identify similar trends in Europe as well. During the last EP election campaign in 2019 voter turnout reached 50.06%, the highest level since 1994. This surge was especially striking among the younger generation: under 25s increased their participation by 14%, while that of  25-39 years-olds rose by 12%.

The momentum of the This Time I am Voting campaign continues under the auspices of together.eu which gives a platform for pro-European (young) people to share their events, complete ELearning modules and receive news about youth opportunities. One of the most important take-aways of the strategy is the success of the “ground game”: young people taking to the street in EU hoodies and engaging their peers through the issues they care about. Using the same language and serving as role models are the very building blocks of mobilising youth and making participation less intimidating. Nevertheless, if such a strategy is to be successful, face-to-face, in-person exchanges will inevitably have to be complemented by a volatile, cutting-edge digital campaign in touch with how and where young people consume information.

The European Parliament Youth Survey 2021 showed that young people’s top two information sources on political and social issues were social media and news websites (41% each). The same study also identified that young citizens most commonly used Facebook (54%), Instagram (48%) and YouTube (35%) to inform themselves about such matters. TikTok only scored 14%. Nevertheless, among 15-24-year-olds – i.e. possible first-time voters – TikTok’s popularity ranks 49% according to the Eurobarometer News & Media Survey 2022 (which might be an indication that the EP should familiarise itself with the platform).

According to the 2022 Eurobarometer on Youth and Democracy in the European Year of Youth, young people also considered posting opinions on social media, using hashtags or changing their profile picture as the second most effective way of making their voices heard (30%), after participating in local, national and European elections (39%).

Gen-Z communicates differently: they have an attention span of 3-8 seconds, are concerned more by policy than politics in general and find aesthetics particularly important. They seek to shift discourse away from long, well-rehearsed speeches by politicians towards two-way dialogue. They want to ask questions (and receive real answers!) and many are looking for practical ways to contribute towards achieving social justice. It’s therefore unsurprising that social media platforms are vital to capturing their interests.

In 2019 the EP ran a successful Snapchat account which was premised on young people ‘snapping’ the Parliament while a whole EP team spent their time reacting directly to the stories and designing competitions. This not only generated engagement and lent authenticity to the account, it also offered a chance for the EP team to learn about the topics the youth were concerned about and the language they used. Issues that were close to the people (e.g. climate, education) resonated particularly well with the audience.

Although it seems Snapchat is waning in popularity – soon to be supplanted by other platforms – offering a chance to young people to engage with the institutions or decision-makers directly, including MEPs on social media (e.g. by interviewing them via Instagram live about the plenary session) can bridge the distance between young Europeans and the Brussels bubble.

Despite the above, it’s nevertheless important to note that less-engaged young people tend to have low trust in social media because of the overwhelming amount of dis-and mis-information, and they do not feel informed enough to find the truth out for themselves.

III: Expanding our definition of politics and youth participation

At the recent “Rethinking Alter-Globalisation” event organised by the EUI-STG Democracy Forum and the TD21 Research Cluster, Daniel Bertram pointed out how a nascent ‘planetary politics’ must harness the voices of youth and of unborn generations towards the common denominator of the environment. Indeed, climate change and ecocide constantly rank high among the issues young people are concerned about and they thus have potential to mobilise youth even across borders.

Case studies on meaningful youth participation – in particular youth activism in social movements and ‘Do-It-Ourselves (DIO) politics’ – confirm that young people have a high capacity for mobilisation which is fostered by social media. The success of the Fridays for Future movement also highlights the transnational characteristics of youth movements. FFF, Extinction Rebellion (XR) and #MeToo are all forms of “pre-figurative politics” where young people are no longer willing to wait for decision-makers to act in the future, but instead prefer to take matters into their own hands to push for innovative radical solutions right now through non-violent direct action and civil disobedience.

The same study points out how Covid-19 has accelerated online activism: during the pandemic, social movements creatively moved their activities online – e.g. #Climatestrikegoingonline – developed online materials and mutual help groups to support and inspire one other. Mass tweets and email campaigns were also among the innovative ways young people transformed their activities in the midst of confinement and social distancing. The rise of online activism is a telling sign that we should shift our perspective about what political participation means to encompass unconventional, non-electoral youth participation (e.g. grassroot activism, signing petitions, school strikes, buycotting and boycotting as well as clicktivism and digital advocacy especially in (post)-pandemic times).

The lessons from these above cases are clear: if politicians disregard youth as being intrinsically disengaged, and fail to invest in communicating with them, young people will, in turn, in a vicious catch-22 situation, feel they are being ignored and will not be motivated to engage. At the same time, when the youth are given a seat at the table, it is vital they are given a real chance to contribute. Authenticity, mutual respect, two-way communication, follow-up and avoiding jargon are all keys to successful cooperation. ‘Youth washing’ must be avoided at all costs.

Réka Heszterényi is currently working as a trainee at the EUI. As a passionate youth worker she has been supporting conversations between decision-makers and young people by organizing conferences and debates in her capacity of an active together.eu volunteer and the Secretary General of JEF Hungary. She is also a communications professional and writes articles on how to engage young people in European politics.