From Scam to Glam: How Harry Potter can help us do better in the next CoFoE Citizens’ Panel

“I think everybody thought it was a scam,” says Daniel, a 21-year-old business student from the Netherlands. We’re talking in Florence, where I’m serving as an unofficial observer of a three-day in-person weekend of deliberation in which 200 randomly selected citizens are discussing ‘democracy, rights, rule of law and security’ as part of the Conference on the Future of Europe (CoFoE). Daniel is one of those who was “selected”. The truth is, though, he only got involved because his friend didn’t trust the person on the phone and had put the invitation in a WhatsApp group chat with the accompanying message: “lol anyone interested?”

Daniel’s friend isn’t the only one who mistrusted the invitation. Many other participants were hesitant. One Latvian panellist told me they’d received an invitation to the Conference by email and thought it very suspicious. Deeper into the registration process, he became convinced it was a phishing operation. The platform design was not up to today’s website standards and he was asked to insert his passport details three times. Any properly functioning site would have saved and encrypted this information the first time around. He thought twice about continuing.

This is not a minor, technical question. The anecdote offers a broader indication of how this experiment of direct and deliberative democracy is being perceived by the public.  It is no secret that the EU has held tightly onto this process so far, from the methodology to the process of agenda-setting. As a result, many are skeptical it could really mean anything. There are those that are afraid that none of the proposed ideas will find their way into the institutions. Most participants are especially concerned with the extent to which Brussels will do – or not do – what their panel proposes. Then there are others that fear the opposite. Namely that the Conference’s output will be poured into binding recommendations and jeapordize the already fragile democratic legitimacy of the EU.

Both sides are fighting for legitimacy. But, as one fact checker in Florence put it: “they have grossly misunderstood the exercise.” There is clearly an opportunity here to implement greater participation. If the EU designs the panels right, their recommendations do not have to be binding. Successful citizens’ panels can also spark discussions in parliament and raise political pressure through their public profile. So how can we improve their design?

As part of this discussion I want to suggest there are serious lessons to be applied from the world of Harry Potter and, specifically, from Hogwarts. For CoFoE to work, it is vital that citizens want to be part of it; and that they feel enchanted. Providing them the best experience to gain access to the workings of the EU institutions should therefore be the main priority. Hogwarts is not only the land of magic for new time wizards, it is also above all the land of the interested. We need to create a Conference that has a strong and engaged fanbase following along. 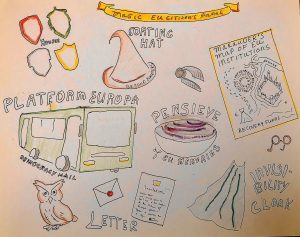 Illustration courtesy of the author: all rights reserved.

Lesson one: make more of the invitation process!

In Harry Potter, every 11-year-old that is selected to go to Hogwarts gets a letter. If citizens were to receive a letter in the mailbox on thick paper with golden engraved letters and serious stamps, the excitement would be equally big for young and old.  It could be a romantic yearly reoccurrence, and there could be a mail delivery bus going around Europe. Younger participants could post their beautiful letters on social media, and there could be scope for publicity stunts. If, for example, national and EU politicians were to deliver some of the letters in person, newspapers would be sure to pick up on the story. Obviously, this would be good for publicity. But it would also serve a larger function: to encourage a focus on transparency of the selection and the seriousness of the panels, right from the start of the process.

Lesson two: why not turn the whole thing into a tournament with a healthy dose of team spirit?

Most of the participants mentioned that they had had no contact with the people from the other three citizens’ panels. There is an opportunity here to enhance the legitimacy of the process by strengthening this network of assemblies. But more importantly, the disconnectedness forgoes an opportunity for making it more fun and accessible to the wider public. To address this, the EU could create its own version of Hufflepuff, Ravenclaw, Gryffindor and Slytherin. This would be symbolic and harmlessly competitive, It would be great to create a new division that is more arbitrary than the borders dividing its citizens. In the halls of the EUI there were journalists hiding in every corner, so when I asked the citizens if they felt ‘watched’ during the process the answer was an unsurprising and resounding yes. But beyond the walls of the institutions, they felt completely invisible. Increasing the entertainment value will make the assemblies more interesting to national news outlets, which in turn will strengthen the position of the chosen citizens.

Lesson three: a crash course in EU Institutions is not enough to ensure quality deliberations

We shouldn’t forget that attending a citizens’ panel deliberation is for many like a step into a different world. Harry Potter teaches us to take the transition seriously. After the 11-year-olds receive their letter and take the train to Hogwarts and get sorted into their house, they are trained to be magicians. The citizen panellists do get a few lessons in the magic of European legislating. But they were quick to admit that the things they were told in short seminars two months ago, did not stick. Discussions were halted by questions such as: what is the difference between a directive and a regulation? And while the CoFoE panels were, like national citizens’ assemblies, equipped with facilitators, factcheckers and experts, these turned out to be of insufficient help; they were too slow and citizens had no idea where the answers were coming from.  Aside from ‘speed’ there is an opportunity for creativity and innovation to improve the deliberation. CoFoE could introduce a few other magic ‘quick fixes’. A variation of the ‘invisibility cloak’, for example, could become a great stunt to allow participants to follow a relevant politician through his or her day with an ‘invisible’ camera. Another added feature could be the ‘Hogwarts Pensieve’, a memory box that holds past memories of relevant policy decisions. This could be in the form of recorded or live direct contact to local policymakers, Eurocrats, or outside experts involved in the governance decisions.

Lesson four: remember that citizens are ready to put the hours in

When it came to the hotel, the dinners, and the views, some of the participants in Florence felt like royalty. As one young woman put it to me: “it all felt like they were corrupting us, but that was okay because we like to be corrupted.” At the same time, just as Harry Potter and his friends were not afraid of the harder parts of being a magician, it was clear that these citizens were not afraid of hard work and early wake-up calls. There is a case to be made to preserve the sweat and the less glamorous side of decision-making, the long working days, and the tough negotiations. There is only one condition: the goal needs to be clear, so the work feels valuable.

Next time, agenda setting though the platform needs to result in a clearer and more topical programme. One way of fulfilling these requirements would be to center the discussion around the new recovery funds. The allocation of these resources remains  largely inaccessible and opaque to everybody outside the EU institutions. Citizen panellists could be tasked to come up with plans to test the legitimacy and ensure the transparency of the political processes that are currently distributing 750 billion euros in the EU. This would be a good way of anchoring a discussion that is highly relevant for the future of all citizens. Relevant topics do not need to be polarized debates. Instead we should not shy away from heading straight to what the EU really is; a maze of technocratic details.

Lesson five: embrace the possibilities for a new, radical transparency

In Harry Potter, they have the Marauder’s Map, a special kind that showed the exact location of everybody at Hogwarts and their every move. I would suggest that citizens get the chance to draw up a map to orient themselves in the maze that is EU policymaking. They could even do this within a citizens’ assembly, in a model akin to Kalypso Nicolaidis’s proposal for a ‘democratic panopticon’; documenting what they see in the form of a kind of public watchdog and calling for more transparency in the process. Instead of worrying about whether the recommendations of the citizens’ panels would become binding and what that would mean, the citizens could thereby take on a much bigger role as the mappers of the ‘blackbox’ of EU governance. The whole thing would be available online and, just like the Marauder’s Map, in the best-case scenario, be constantly updating at all times. This new form of institutionalized participation could, without question, work in tandem with the classic model of recommendation gathering. It could be what jury duty is to the American people, but with more intrigue and political game. All we need now, is four genius names for our competing “houses”.

Fee Kirsch is part of the first cohort of the Master of Transnational Governance at the EUI. Alongside her Masters, she advocates for more youth voices in climate policymaking. During her visit to COP26 with the Dutch Young Climate Movement, she also observed the developments around the first Global Citizens’ Assembly on climate change. She has been a part of the EUI Democracy forum since its creation. Last Spring, she cowrote and directed an interactive play for the citizens’ engagement program of the State of the Union in Florence.