The citizen: object or subject?

While there is an abundance of (quantitatively oriented) surveys on citizen attitudes towards Europe, here I argue that a mixed approach, in which citizens are not only political objects in a pre-fabricated design, but actively engage and articulate their subjective positions, is preferable and brings rich insights. This is the aim of a recently held SenseMaker survey, designed by Citizens Take Over Europe (CTOE).

The citizen is in the spotlight. Either as part of a ‘pure people’, as endorsed by populists, or as the ideal benchmark for policy-making, evident in the current participatory trend in modern democracies. Policy-makers, experts, bureaucrats, and scholars are eager to ‘see through’ the citizen in order to either enhance the efficiency of processes of governance, to understand the worrisome trend of voting for populists and/or Eurosceptics, to tease out or predict behavioural patterns taken as laws of social conduct, or to fine-tune ideal-typical models of democracy. Hence, various surveys, consultations, but also mini-publics and citizens’ assemblies are being organized in order to tap into the new ‘goldmine’ of citizen wisdom.

The purpose of most surveys seems to be to identify stable preferences of citizens, often allegedly linked to demographic, educational, socio-economic and other ‘objective’ criteria. The end-goal is to come to solid scientific insights as to the opinion of the ‘average citizen’. Another purpose is to identify and instrumentalize existing pools of societal legitimacy that allegedly underpin the existing order or status quo (as is arguably the case with the European Commission’s Eurobarometer, a device that attempts to unearth the largely positive attitude of European citizens towards (further) European integration).

Surveys are designed to provide snapshots of citizens’ preferences so as to monitor ‘public opinion.’ As Pierre Bourdieu has famously argued, however, public opinion does not exist, if not as an object crafted by the opinion pollsters themselves. The snapshots remain superficial, in survey responses that allow for few options to choose from, while the deeper reasons behind specific preferences or attitudes – the subjective viewpoints and beliefs of citizens themselves – remain unexplored and hidden.

The absence of ‘the political’

Clearly, ‘listening to the citizens’ participating in deliberative innovative events such as mini-publics and citizens’ assemblies (the Citizens’ Panels of the Conference on the Future of Europe are an example) allows for more nuanced and in-depth ways of getting to know citizens’ preferences and viewpoints. Unlike most surveys, citizens’ assemblies are designed so as to allow citizens to provide their own subjective view and to elaborate reasoned political value-judgements beyond a pre-fabricated remit. Hence, deliberation is not to lead to a mere aggregation of predefined individual opinions, but is to tap into the inner, subjective processes of thought and reasoning of the citizens, which are exposed, confronted, and perhaps revised in processes of deliberation.

The actual design of deliberative processes, however, too often tends towards an instrumental usage of deliberation, which may more or less drastically reduce the emergence of individual political subjectivities in the process. The main rationale of inserting citizen deliberation into democratic institutional practice is to add the view of the ‘average citizen’ to the larger pool of relevant political positions (of different institutional actors, such as, e.g., the European Commission; of specific representatives of political-ideological formations; as well as of separate countries or Member States). 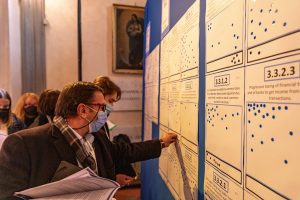 Citizens participated in the panel on ‘European democracy / Values, rights, rule of law, security’ in Florence on 10-12 December 2021. Image: All rights reserved.

Concieved in such a manner, citizen deliberation frequently involves moments in which different positions are ‘ironed out’, for instance by voting on recommendations (that is, a form of aggregation or objective measurement)  and the necessity of coming to a consensual position that reflects what the ‘average citizen’ really wants. What is clear is that highly different, unorthodox, and potentially incompatible positions disappear in the process and are hardly registered. The fact that citizens – just as institutions, political actors, and stakeholders – are a pluralistic lot and may hold justifiable and reasoned different positions in terms of values, beliefs, and understandings seems ignored. The goal of deliberation is to produce objectified results, to be fed into the political process. If politics is however, as Hannah Arendt argued, about different human beings who make sense of the world in different and often irreducible ways, then both survey approaches and currently-existing deliberative exercises seem to absorb or eliminate the political.

There are unfortunately few approaches in democratic research that aim at giving the individual citizens’ subjective positions their due. One of these – in the form of a consultation – is the Sensemaker survey, set up by CTOE, which has recently been used to identify different citizen attitudes towards the EU and the ongoing Conference on the Future of Europe.

In contrast to survey approaches that generally seek to contrast positive and negative positions with regard to European integration, the Sensemaker consultation teases out a larger array of positions, ranging from satisfied, confident, excited, and hopeful, to frustrated, excluded, fearful, confused, and disengaged. These are linked to qualitative statements or elaborate reasonings which provide insights into deeper reasons as to why citizens feel a specific way about (distinctive aspects of) integration: in terms of relations to the EU, citizenship, and understandings of the European project. Equally important, it allows analysts to deconstruct positive and negative positions into more specific attitudes, which helps to diversify a range of positions, not reducible to pro-European or Eurosceptic attitudes.

One of the most intriguing responses so far comes from a citizen who argues that he/she “feels ashamed of being European” as a result of the EU’s migration and asylum policies. In their words: “the mismatch between rhetoric and reality is immense. The systemic violence along Europe’s borders is a policy choice, not a force of nature, so I believe it can be changed. Despite the above, I still believe that democratic institutions and European values can allow for such change to happen.” Clearly, this form of consultation allows for a deeper understanding of such articulations, and to differentiate citizens’ positions on what are preferable and valuable democratic possibilities and instruments.

The challenge posed by the Conference on the Future of Europe is exactly how to come to a durable participatory institution that allows complex and conflictive sentiments as well as different political subjectivities to be included, articulated, and acted upon. The current Conference is very much a learning process. A future institutional space – for example, a permanent citizens’ assembly – should consider providing more breathing space for citizen deliberation, in terms of, for instance, the inclusion of marginalized voices, much more extensive time for deliberation, and citizen input into design of the process. This would allow every citizen to be a political subject, not object.