The Future of Europe debate needs the intermediary power of journalism

The Future of Europe debate has been an invitation to all citizens to ‘make their voice(s) heard.’ The Commission has provided a forum for the peoples of Europe to articulate themselves and confront decision-makers with their visions of a future European Union. As we write, the European Citizens’ Panels (ECPs) of the Conference on the Future of Europe (CoFoE) are delivering their recommendations to be debated at the Conference plenary meeting in March 2022. Despite the pandemic, the Conference has facilitated physical meetings of the selected citizens in Strasbourg, Florence, Maastricht and Dublin. The citizens’ panels were meant to facilitate open, inclusive, transparent and structured debate, and every single European citizen should, in theory, have been able to introduce new issues on the agenda.

As a new public forum that claimed to represent the people of Europe, the ECPs were not only supposed to engage in deliberations and informed debate, but also to reach out with their ideas and proposals through the media. Specific efforts to gain public visibility were made through the EU’s public communication channels and press services. The plenary meetings were livestreamed on the Conference’s Multilingual Digital Platform, and through the Parliament’s Multimedia Centre. Recorded sessions were made available through the Conference websites to be shared through social media. Accredited journalists attended the meetings and critically covered the debates in national news outlets, even though news coverage of the Conference overall remained limited.

With the citizens’ inputs coming to a close soon, only about a third of Europeans appear aware of the ongoing debates about the Future of Europe as the 2022 Special Eurobarometer 517 shows (EU average 33%, min. 22%, max. 54%), and this awareness is mostly vague, i.e. when asked “Have you recently read in the press, seen on the Internet or on television or heard on the radio something about the Conference on the Future of Europe”, on average 1 in 4 replied (EU average 23%) “Yes, but don’t really know what it is about” (Special Eurobarometer 517, QA6). The reach of the proceeding of the Conference and its concrete proposal is arguably even more limited. The citizens’ inputs to the Future of Europe debate are thus facing here the same public sphere deficit which, for decades, has blocked EU actors and institutions from effectively reaching out and building public understanding. 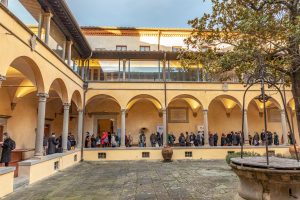 Citizens assembled at the EUI in Florence as part of the ECP2. All rights reserved

A question of ‘framing’

Information about the EU is not necessarily hard to get: Various transparency initiatives in the past have ‘de-facto’ turned EU governance into an often much more open and visible process than decision-making by national governments and ministries. Nevertheless, knowledge that citizens have about the EU remains vague and the ‘Brussels bubble’ is often perceived as an alien sphere navigated by stakeholders, experts and national representatives, far from the everyday problems of Europeans.

It’s clear therefore that as the EU project grows in complexity, simple transparency initiatives are insufficient, not least because they are driven by a long-standing yet so far unsubstantiated assumption that greater transparency and publicity will lead to increase in EU approval rates. Yet the role of journalism as a democratic institution is not only to provide independent and unbiased news coverage of the political process; it also entails journalists being afforded the space to exercise interpretation, selectivity and political bias/partisanship.

The role of journalists as gatekeepers of the news sphere, whereby they exercise precisely their interpretation and selectivity to determine what becomes ‘the news’ each day, means that not everything the EU does or proposes becomes a news story. In the Future of Europe debate, the threshold of newsworthiness is often hard to reach and specific media events need to be created that make it attractive for journalists to pick up EU news stories. Journalistic interpretation means that EU news stories are framed according to cultural schemes and news values.

In the Future of Europe debate, framing also means ‘simplification’ that facilitates common understanding. Framing is a chance to reduce complexity in a meaningful way to enhance understanding of EU citizens. Framing is also a risk, however, because particular biases apply, often in terms of negativity and national interests. In the Future of Europe debate, accredited journalists still write dominantly for national readers and not for an EU constituency. Their news stories might therefore often be found to be nationally biased. What is perceived as ‘national bias’, however, could also be the key to bringing EU integration ever closer to its citizens.

In the Future of Europe debate, the challenge for the intermediation of the complexity of EU governance is hardly considered. There is an emphasis on participation and deliberation but a neglect of intermediation. The EU does not only need citizens willing to become active and to participate in debates but also intermediaries between the EU and the citizens. This intermediary function should not be ignored, as is done in more recent approaches of the EU to enter a direct relationship with the citizens through social media or online platforms of encounter and exchange. Journalists are not only more effective at reaching out to the citizens, they are also the only guarantee of independence of information and opinion in a way that the control function of the public sphere of democracy can be exerted.

For this reason, EU journalism needs to be allowed to unfold as an independent institution not only in Brussels but also in the member states. To this end, the Commission’s recent decision to make press briefings digital in the post-pandemic era and allow journalists from across Europe to attend virtually moves perhaps in the right direction, despite the controversy this decision has sparked among accredited EU correspondents. The Commission’s intention to make online events introduced during the pandemic a new norm would see regular technical and off-the-record briefings open to journalists across the EU, with reporters outside Brussels having the right to ask questions just like Brussels-based correspondents. Digitalization of the Brussels press briefing system would also entail maintaining the daily midday briefing as a hybrid system, where accredited Brussels journalists can participate and ask questions in person and via video conference.

The agenda of such an EU specialised journalism will never be congruent with the agenda of EU policy proposals. Facilitating broader and more intense media coverage of the EU integration process may result in even more critical voice expressed through the media. The outcome might often be negative news coverage, which from the perspective of EU institutions is not always perceived as fair and accurate. Nevertheless, acknowledging the intermediary role of journalists is a clear signal of confidence in the democratic public sphere that builds the EU polity through critical awareness of the citizens, some of them showing high levels of political engagement but the majority being passive bystanders who are principally informed through the press and television.