What do citizens want from the Conference on the Future of Europe?

This post is part of a series of pieces analysing the preliminary findings of an ongoing SenseMaker survey conducted by Citizens Take Over Europe to gauge public attitudes to the Conference on the Future of Europe.

The Conference on the Future of Europe is a one-off participatory exercise that has the potential to change the face of EU democracy. It contains highly innovative participation in the form of citizens’ panels: four groups of 200 citizens, selected to provide a representative sample of EU society, have the chance to influence the future of Europe.

Could these panels be a forerunner to an EU citizens assembly, or help embed citizen participation in the next treaty change process? To assess the prospects for such a transformation, Citizens Take Over Europe, a coalition of civil society and academics, surveyed citizens to gauge attitudes towards EU democracy and the Conference. The message from the 1,600 responses should serve to temper some of the more pessimistic conclusions about the Conference: citizens may not yet be clear about exactly what they want, but there is a clear appetite for EU democracy to evolve and innovate. 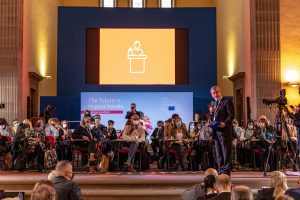 The European Citizens’ Panel on European democracy / Values and rights, rule of law, security’ met in Florence on 10-12 December 2021.

Participation beyond the nation-state

Our survey respondents indicated a clear positive attitude towards EU democratic participation. 85% thought that on balance the EU strengthens democracy, and over a quarter were in the top decile. This places the attitudes towards participation commented on here in a very positive democratic context. Even most of those that feel fearful, frustrated or excluded by the EU believe that the EU strengthens democracy. This indicates strong foundations on which to build further EU citizen participation.

This corresponded with a surprisingly strong rejection of increased Member State autonomy. We asked whether the EU needed more shared values, goals and commitments, or more democracy and citizen participation, or more Member State autonomy. Over 90% strongly supported the first two options. Our respondents are clearly looking towards more democratic participation through the EU as a means of developing their influence on EU law and policy.

Despite the rejection of increasing Member State autonomy, there was limited support for turning to EU institutions as an alternative, or strengthening the role of EU elected representatives. This indicates citizens want to do democracy differently, which is reflected across the survey responses as a whole.

Respondents were given three options for strengthening EU democracy: involve citizens more directly in decision-making, strengthen the role and influence of elected representatives, or increase and improve deliberation among citizens and with decision-makers. Responses to this question appear to recognise that there is a need for a multi-faceted approach to developing EU democracy. Over a quarter wanted all three options to be progressed to improve EU democracy, and 22% of respondents specifically wanted both more deliberation and more direct citizen involvement in decision-making. This desire for multiple opportunities for participation through the decision-making process was further supported by the fact that the majority of respondents favoured influencing decisions at an early agenda setting stage, rather than at the voting stage, when given a binary choice.

Yet, overall support for deliberation as the sole priority for strengthening EU democracy was surprisingly low. This could be because it is a relatively new, untried form of democracy and the sense of what deliberation really means is low. Given the strong support for shaping the political agenda over voting, it will be interesting to explore further the connections that people make between deliberation and agenda setting. In particular whether support for deliberation was limited because it is viewed as a form of participation that has limited impact. The strongest fear for the Conference that survey participants expressed was that it would not lead to tangible policy change.

Over the coming weeks and months Citizens Take Over Europe will be digging deeper into the qualitative responses of this pre-Conference survey. But we also need a detailed understanding of people’s experience of the Conference, particularly from the citizens who took part in the panels. There is a rich opportunity to follow up on the questions raised here about participation, deliberation, agenda and policy influence, and the role of representatives that should not be missed.

Citizens want to continue developing EU level participatory democracy; more than within the Member States. They want new forms of citizen participation beyond the traditional opportunities to vote for representatives. This is not necessarily a wholesale rejection of representative democracy. People view EU democracy positively, but there is clearly a sense that citizens want something to change to provide more direct involvement in decision-making. More research though is needed to understand the innovations that citizens want, how best to increase participation in the next treaty convention, and how to institutionalise something akin to the Conference citizens’ panels on a permanent basis.

James Organ is a lecturer at the School of Law and Social Justice, University of Liverpool. He specialises in research into participatory democracy. Recent publications include Citizen Participation in Democratic Europe: What Next for the EU? (ed. Alberto Alemanno and James Organ, ECPR Press 2021). James is currently part of the constitutional working group monitoring the Conference on the Future of Europe for CTOE. This blog is based on the work of that group.