The team of the Visual and Material History Working Group is very happy to invite you to its next event which will take place on the 23rd of November at 11:00. For the fifth session of the “Talking about things” seminar series, we will consider how visual and material sources can inform the history of textile, dress and fashion. This session will host two presentations, followed by questions and a discussion.

Choosing what we wear, and how, has been a process in constant evolution. The consumption of clothing, and fashion, progressively developed through time, and the eighteenth century is often considered a turning point in the way garments were acquired and used in Europe. The silk fabrics manufactured in the French city of Lyon played a role in this development, not only in France but in other European countries. By looking at the Italian consumption of French silks, I will discuss how the Lyonnais manufactures participated in this transformation of consumption patterns. I will do so by focusing on a specific type of clothing, the male waistcoat. This garment is a fitting embodiment of the increasing range of goods and shopping possibilities that were offered to eighteenth-century European consumers, bringing them gradually closer to todays ready-made clothing industry. The waistcoat is also an excellent example of the ways material remains of clothing items, used alongside written sources, can inform us on what was an essential part of past societies.

From Paper to Cotton: Visual Translation and Technological transfer. The case of Mexico y sus alrededores in nineteenth-century Britain – by Victoria de Lorenzo (University of Glasgow)

The proliferation of handkerchiefs printed with genre scenes of Hispanic imagery in nineteenth-century Britain pushed me to investigate their visual sources. A number of prints by different British calico printers derived from the Mexican album of lithographs titled Mexico y sus alrededores (1855), a prominent document which aimed to establish the foundations of a vernacular Mexican visual language and culture.  The adaptation of these lithographs by British calico printers was not merely a commercial move in response to Mexican markets, instead it was linked to the role of printed handkerchiefs as educational tools in the nineteenth-century. In this paper, I want to investigate the implications of the visual translation and technological transfer process from lithographs onto handkerchiefs through the lens of British nineteenth-century informal imperialism.

This session will take place via Zoom. If you wish to attend please register by contacting the Visual and Material History Working Group organisers:  Moïra Dato, Ana Struillou or Matthias Ebejer.

Welcome to our blog 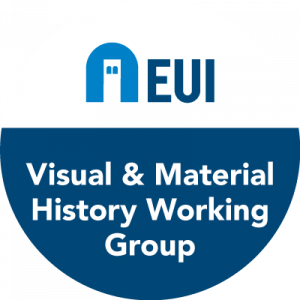 Founded in 2018, this blog provides a platform for the publication of events and discussions of the Visual and Material History Working Group. It functions as a researcher-led presentation and discussion forum, set up to interrogate how historical research relates to the issues of visuality and materiality.