MATERIAL HISTORIES OF EMPIRE AND COLONIZATION

The Imperial History and Visual and Material History Working Group are happy to invite you to a joint session, which will take place on the 13th April at 10:30 on Zoom. During this event, we will explore the history of empire and colonization through material and visual sources. From garments to human remains, we will interrogate the ways in which objects can bring new insights to the modalities of Western presence abroad – be it in South-East Asia or West Africa.  This session will host three presentations, followed by questions and a discussion.

Up to the present day, studies on the history of Western presence in China from the sixteenth to the beginning of the twentieth century have usually mentioned two contrasting dressing strategies. While residents in the foreign settlements kept to their Western dress, some missionaries  opted for Chinese garments. This paper focuses on the sartorial strategies adopted by missionaries, diplomats and doctors in China throughout the nineteenth century. These Westerners shared the characteristic of having to maintain their status in the eyes of foreign residents in China, while cultivating good relations with the Chinese population and officials. Such a double injunction translated into hybrid sartorial strategies which evolved according to time as well as geographical and social contexts. In other words, one did not dress the same way before and after the Chinese territory completely opened to foreign travellers in 1860, nor did one dress the same way in Shanghai or in the interior of the country. Above all, sartorial practices involved a broad spectrum of issues, exceeding the mere choice between Western and Chinese dress. Knowing what garments to wear, when and how to wear them was a political, evangelical as well as medical question, that involved both practical logistical matters and co-constructed expertise and know-hows.

A folding chair, a mosquito net, a water keg, four kaki costumes, a gramophone, a fishing equipment and a few crates of champagne bottles… These are just a few of the many objects French officers were advised to pack in anticipation of their colonial campaigns in Tropical West Africa. What part did objects play in the French conquest of colonial territories, during the nineteenth century and the first decade of the twentieth century? If weapons have long been recognized as key objects in the European colonization of African and South-East Asian territories, many other neglected tools of the conquest made up the daily life of colonizers and slowly permeated those of the colonized. How were European objects (ranging from camping tools to food cans and uniforms) carried and used ? What purposes did they serve ? How did European and Indigenous material cultures interact within the setting of the French colonial army, through the relationship between French officers and soldiers and colonized auxiliaries recruited as tirailleurs ? This presentation will present a few lines of research about material cultures of colonialism as well as some reflections about the use, and limits, of visual and written sources in such an endeavour.

“Uncomfortable keepsakes: Objects from the colonial past in institutions and the home” – Leonor Faber-Jonker (Independent Researcher and Curator) 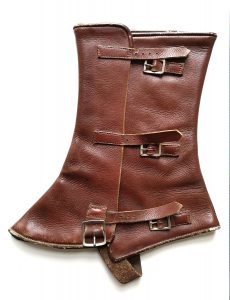 In September 2011, twenty Namibian skulls were repatriated from the collection of the Charité University Hospital in Berlin. The remains had been in Germany for more than a hundred years: they belonged to victims of the ‘German-Herero war’ in German South-West Africa (1904-1908), a genocide that cost the lives of 80% of the Herero and half the Nama population. The majority of the skulls had arrived in Berlin as preserved heads, and all had been used for scientific race research in the first decades of the 20th century. Despite the triumphant return of the skulls, the Charité was criticized for failing to answer questions about the identity of the remains, and the Namibian government and Nama and Herero representatives failed to agree on their final resting place. This had everything to do with the complicated nature of the skulls involved. By the time these human remains were repatriated, they had acquired many layers of meaning. They had been collected as trophies, studied as specimens, and were now returned to Namibia as ancestral remains, evidence, symbols, and relics. Not all objects from the colonies are as contested as these human remains. Nor do all such objects reside within the walls of museums or institutions. In fact, material traces from the colonial past can also be found in the realm of the home, where they often go unnoticed, half-forgotten keepsakes in drawers and cupboards. Using the example of a pair of ‘snake boots’ from the collection of my grandmother, a former migrant to Southern Rhodesia (Zimbabwe), I propose that such mundane objects also acquire layers of meaning. By focusing on the materiality of the objects to ‘unravel’ these meanings, we are forced to ask poignant questions that help us understand both colonial and postcolonial practices.