Europe, as a distinct political and economic body as well as a collection of separate states, is facing constitutional challenges from within and without. Brexit, Catalonia, Poland, Hungary and Romania – as well as events within the European Union itself – all present challenges to European principles of constitutionalism.

On Thursday, January 25, 2018, the Center for Comparative Legal Studies and Post-Conflict Peacebuilding at William & Mary Law School and the European University Institute sponsored a panel on “Constitutions in the Crosshairs: Europe in 2018” to reflect on Europe’s current challenges and constitutional crossroads.

The presentations generated a lively debate on a variety of topics, from referendums and secession processes to populism and rule of law challenges within the EU. Below are some pictures from the event. 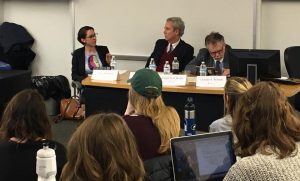 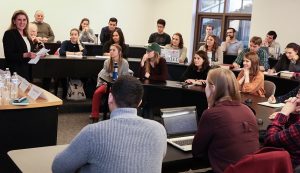 The Center for Comparative Legal Studies and Post-Conflict Peacebuilding at William & Mary Law School, a partner or our working group, bridges the gap between resources available at academic institutions and the need for them in the field, where people engaged in the difficult work of building democracies, strengthening the rule of law, and reconstructing societies following conflict often labor without basic resources. Learn more.

Page of the event here