Our working group has the pleasure to invite you to the launching of the forthcoming book Gender Equality in Law. Uncovering the Legacies of Czech State Socialism by Barbara Havelkova, Shaw Foundation Fellow in Law at the University of Oxford, and a kind supporter of our working group.

Description of the book:

“Gender equality law in Czechia, as in other parts of post-socialist Central and Eastern Europe, is facing serious challenges. When obliged to adopt, interpret and apply anti-discrimination law as a condition of membership in the EU, Czech legislators and judges have repeatedly expressed hostility and demonstrated a fundamental lack of understanding of key ideas underpinning it. This important new study explores this scepticism to gender equality law, examining it with reference to legal and socio-legal developments that started in the state-socialist past and that remain relevant today.

The book examines legal developments in gender-relevant areas, most importantly in equality and anti-discrimination law. But it goes further, shedding light on the underlying understandings of key concepts such as women, gender, equality, discrimination and rights. In so doing, it shows the fundamental intellectual and conceptual difficulties faced by gender equality law in Czechia. These include an essentialist understanding of differences between men and women, a notion that equality and anti-discrimination law is incompatible with freedom, and a perception that existing laws are objective and neutral, while any new gender-progressive regulation of social relations is an unacceptable interference with the ‘natural social order’. Timely and provocative, this book will be required reading for all scholars of equality and gender and the law.”

“In Gender Equality in Law: Uncovering the Legacies of Czech State Socialism, Barbara Havelková offers a sober and sophisticated socio-legal account of gender equality law in Czechia. Tracing gender equality norms from their origins under state socialism, Havelková shows how the dominant understanding of the differences between women and men as natural and innate combined with a post-socialist understanding of rights as freedom to shape the views of key Czech legal actors and to thwart the transformative potential of EU sex discrimination law. Havelková’s compelling feminist legal genealogy of gender equality in Czechia illuminates the path dependency of gender norms and the antipathy to substantive gender equality that is common among the formerly state-socialist countries of Central and Eastern Europe. Her deft analysis of the relationship between gender and legal norms is especially relevant today as the legitimacy of gender equality laws is increasingly precarious.” Professor Judy Fudge, Kent Law School 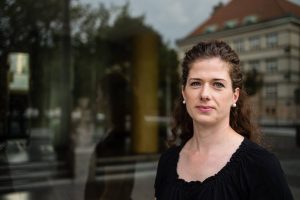 Barbara Havelková is the Shaw Foundation Fellow in Law at Lincoln College and Faculty of Law, University of Oxford. She teaches EU Law, public law, human rights, comparative equality law and feminist jurisprudence. Her research concentrates on regulation of gender during State Socialism and in post-communist transition in Central Europe.

Barbara completed her first degree in law at the Charles University in Prague, and also holds an LL.M. from Europa-Institut of Saarland University and a DPhil from Oxford. She was previously a lecturer and fellow at the University of Cambridge and visited several law schools as a guest researcher, including Harvard University and University of Michigan as a Fulbright scholar.

Barbara acts as an advisor to the Prime Minister of the Czech Republic on issues of gender and law.

Poster of the event