New book: The Constitution of Romania – A Contextual Analysis 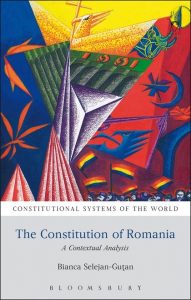 In April 2016, Hart Publishing released the book “The Constitution of Romania – A Contextual Analysis” by Bianca Selejan Guțan.

The book has been received with highly positive reviews. For example, Bogdan Iancu wrote that “the book offers its reader a superb, highly insightful and informative, introduction to the Romanian Constitution and the avatars of contemporary Romanian constitutionalism. Indeed, this is the first self-standing volume on the topic published in English, with an international press, for an international academic audience.” (our emphasis)

Bianca Selejan-Guțan, PhD, is Professor of Constitutional Law and Human Rights Law at the Faculty of Law, ‘Lucian Blaga’ University of Sibiu, Romania.