Recommended book: Constitutional Secularism in an Age of Religious Revival 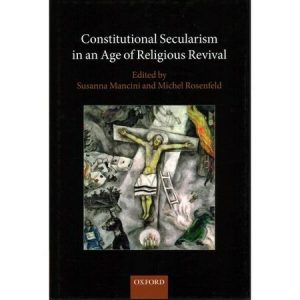 The Constitutionalism and Politics Working Group at the EUI is delighted to invite you to a lecture by Prof. Michel Rosenfeld, University Professor of Law and Comparative Democracy, the Justice Sydney L. Robins Professor of Human Rights and Director, Program on Global and Comparative Constitutional Theory at the Benjamin N. Cardozo School of Law of Yeshiva University, on Thursday 13 October (time: 17:00 to 19:00 in Sala del Consiglio, Villa Salviati).

Prof. Rosenfeld will discuss a chapter of his book edited together with Susanna Mancini: “Constitutional Secularism in an Age of Religious Revival” (Oxford University Press, 2014). In preparation for his lecture we want to invite you to take a closer look at the table of contents of this book as provided by the publisher:

Part I: Theoretical Perspectives on the Conflicts between Secularism and Religion
2: Conflicts Between General Laws and Religious Norms, Dieter Grimm
3: The Context of Secularism: A Critical Appraisal of the Post-Secular Argument, Nadia Urbinati
4: The Myth of the Neutral State and the Individualisation of Religion: The Relationship Between State and Religion in the Face of Fundamentalism, Karl-Heinz Ladeur
5: Preliminaries to a Concept of Constitutional Secularism, Andras Sajo
6: Recasting Secularism as One Conception of the Good Among Many in a Post-Secular Constitutional Polity, Michel Rosenfeld

Part II: Religion, Secularism and the Public Square
7: The tempting of Europe, the political seduction of the cross. A Schmittian reading of Christianity and Islam in European constitutionalism, Susanna Mancini
8: On the Secularisation of the Public Square: Jews in France and in the United States, Pierre Birnbaum
9: Sovereignty and Laïcité, Michel Troper
10: Egypt’s New Constitution: the Islamist Difference, Lama Abu-Odeh
11: The Constitutional Boundaries of Religious Accommodation, Ran Hirschl and Ayelet Shachar

Part IV: Religious Perspectives and the Liberal State
15: One among many? The Catholic Church between universalism and pluralism, Gustavo Zagrebelsky
16: Religious Marriage in a Liberal State, Gidi Sapir and Daniel Statman
17: Are Secularism and Neutrality Attractive to Religious Minorities? Islamic Discussions Of Western Secularism in the ‘Jurisprudence of Muslim Minorities’ (Fiqh Al-Aqalliyyat) Discourse, Andrew F. March

Part V: The Confrontation between Secularism and Religion in Specific Contexts: Education and Free Speech
18: The Ultra-Orthodox Community in Israel and the Right to an Exclusively Religious Education, Gila Stopler
19: Religion and Freedom of Speech: Portraits of Muhammad, Robert Post”

Related to the event that will take place on Thursday, we particularly recommend Chapter 6 written by Prof. Rosenfeld: “Recasting Secularism as One Conception of the Good Among Many in a Post-Secular Constitutional Polity” and Chapter 7 written by Prof. Mancini: “The tempting of Europe, the political seduction of the cross. A Schmittian reading of Christianity and Islam in European constitutionalism”.

We hope to see you on Thursday,