“Project, Opposition, and most Embarrassingly, Truth” 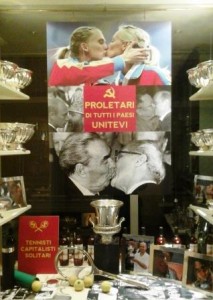 Over at n+1, an editor’s essay on the fragmented pasts and fraught promise of World Literature has spawned a small collection of thoughtful responses. In trying to capture a sense of what weltliteratur might be for, and why the contestants always seem to have fallen short of the mark (“Alas, Rushdie; alas, Naipaul.”), the editors string together an impressive array of traditions and examples, showing how each contributes to a synthesis that fails as much as a whole as in its individual parts.

Steeped as it is in the altogether modern desire to express the universal in the particular—i.e. to not only craft a particular voice, but to somehow choose voices that can stand in for the whole— the editors conclude that perhaps the disappointments of the genre arise not from the particular attempts that have been made of it, but in the shape of the ambition itself.

One of the responses, from Poorva Rajaram and Michael Griffith, dismisses the essay as a lament for a “right kind of universalism” that is not only unrealised, but unrealisable. They end by suggesting to those unsatisfied with the output of the spirit of capitalism as embodied in the publishing houses of northern capitals that they might simply “read more to their taste.”

Is the complaint fair? The essay is an attempt to investigate not what literature should be consumed, but how those engaged in its curation, can support human connection across difference (what Rorty would call the “education of the sentimental imagination”) and stay founded in a commitment to the political value of aesthetic freedom, without becoming Global Literature, i.e. “an empty vessel for the occasional self-ratification of the global elite.”

Joshua Cohen’s letter responds clearly to this ambition. In his view, the problem isn’t with the ends, but with the means. Literature relevance has passed: “Social consciousness has become the new beauty. The political has usurped the aesthetic.” Be that as it may, it’s not clear how much this differs from the essay’s own conclusions, which lay out, by reference to Trotsky (!), a blueprint for an alternative, “internationalist” literature.  Rather than an aesthetic practice with universalist pretensions, the concept here would be an explicit project that beats the path to freedom and solidarity by countering prevailing politics and tastes, rooted in the effort to articulate truths.

The important thing that Rajaram and Griffith seem to have forgotten is that the essay’s authors are not anonymous readers of the stuff put out by those northern-capital publishers, but rather a group of 20- and 30-somethings who edit a surprisingly influential literary journal published just down the street from them. When those editors provide the outline of a project for literature, the curious reader might, instead of suggesting sources that fit the bill, inquire into what exactly those editors have been printing for the last ten years. Because when one starts to look at the diversity, anger, curiosity and honesty that one finds between the journal’s pages, one can only conclude that the essay is neither reading guide, nor lamentation.