Covid19 in Tunisia: Beyond the health crisis, a socio-economic challenge

Aware of the fragility of the country’s healthcare system and its high risk of a rapid spread of the coronavirus due to the country’s close connection with Europe, the Tunisian authorities took early measures to prevent large-scale contamination, which they would be hard-pressed to handle at the level of medical services. While the epidemic seems to remain under control so far, the socio-economic consequences of the crisis may eventually prove more damaging to Tunisia than the virus itself.

From travel restrictions and border medical control to a progressive closing down of schools and public spaces, preventive measures were gradually introduced in Tunisia in early March, as the country was watching European medical systems collapsing in the face of a sudden surge of coronavirus cases. On 20 March the Tunisian authorities eventually decided on a total lockdown, restricting people’s movements and activities to the minimum necessary to keep key sectors of the economy afloat. Criticised as rushed by some and as insufficient by others, these measures, however, seem to have kept the situation under control so far.

Anticipation has indeed proven crucial in the Tunisian authorities’ response to the crisis. The new government, which only assumed power at the end of February, barely had time to get settled before being confronted with its first but not its least challenge. Resulting from several months of negotiations that threatened to lead to political deadlock, the new cabinet headed by social-democrat Elyes Fakhfakh and supported by a heterogeneous coalition where mutual trust is in short supplycould not, however, afford to lose this trial by fire, especially in a context of growing public mistrust of the political class and scepticism about the State’s capacity to address citizens’ concerns. Playing the anticipation card was therefore essential, not only to avoid a medical disaster but also to prevent socio-economic breakdown in a country that still remains fragile after a decade of political transition.

Coping with a fragile healthcare system 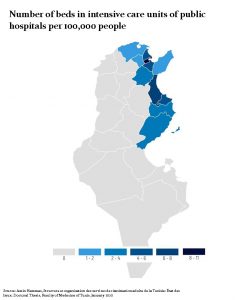 With a weak public health system shaped by crumbling infrastructure and regular shortages of medications, which has been further damaged by a rising outflow of trained doctors and medical staff over the last few years, Tunisia is hardly prepared to cope with a massive growth in numbers of patients. Despite reassuring words from the government on the country’s medical capacity, Tunisia only has an estimated 700 beds in intensive care units (public and private sectors combined) – and these are not all functional or only dedicated to Covid-19 patients – for about 12 million inhabitants. However, not all Tunisians are fighting the epidemic on an equal footing. The crisis has indeed blatantly highlighted the regional disparities in access to healthcare, with most medical services and particularly intensive care units concentrated in the capital and coastal regions.

The young average age of the Tunisian population is also no guarantee of protection against the virus. Chronic diseases are widespread in Tunisia, including diabetes, obesity and cardiac and respiratory insufficiencies, which affect all age categories, especially in marginalised regions and low-income communities. This is partly due to a lack of systematic medical follow-up and preventive care resulting from limited health insurance coverage and limited access to medical infrastructure in some parts of the country, where malnutrition and poor living conditions also leave large fringes of the population extremely vulnerable.

While of the 628 cases and 24 deaths reported to date only a few are located in the marginalised governorates of the north and centre-west (between 1 and 11 cases), this may not last for long. The actual number of infected people is probably much higher than officially stated, as the number of tests conducted so far has been rather limited (8,878). Moreover, the impossibility of retracing the origins and chains of transmission of the most recent cases has raised concerns that the virus may be spreading faster than thought, and it could be only a matter of time before the internal regions become more seriously affected.

Dealing with the socio-economic reality

At the economic level too, the Covid crisis does not have the same meaning for all Tunisians. While the government has apparently measured the scope and gravity of an almost complete shutdown of economic activity for the population, especially for households whose survival depends on day labour, and as unemployment benefit is inexistent, the package of financial measures envisaged by the authorities raises questions and challenges.

Committed to “leave no one by the wayside,” the government has not skimped on resources to cope with the economic and social effects of the Covid crisis. A first allocation of 2.5 billion dinars (800 million euros) was provided to support businesses and workers by preventing company bankruptcies and job losses. This included 150 million dinars (48 million euros) to be paid directly to low-income families. Another 500 million dinars (160 million euros) were later added in complementary measures, in particular to expand financial support to retirees, middle-income families and Tunisian students abroad. Although commendable, this ambitious plan faces multiple difficulties in its practical implementation on the ground.

First, identifying households eligible for State aid is no easy exercise. While about 900,000 families with low incomes or special needs are registered in the databases of the Ministry of Social Affairs and benefit from regular support, these figures are far from being up to date. Hundreds of thousands of ‘invisibles’ – unemployed people, retirees or people working on the fringes of the formal economy – simply fall through the social safety net and appear nowhere in State statistics. Overall, and although exact figures are difficult to know, about a fifth of the Tunisian population does not have a stable income and could be vulnerable to the effects of a long-term lockdown.

While the current crisis could have been an opportunity to clean up the State’s registers and get a clearer picture of Tunisians’ social situation, choosing to rely on needy people to proactively register with the local authorities in a context of restriction of movement, limited public transport, remoteness from administrative centres in rural areas and mistrust of a local administration that has barely been reformed since the revolution was certainly not the most appropriate way to facilitate the identification process.

Aid delivery is no less problematic. While the authorities had counted on the use of computerised data, mobile phone services and a clear calendar to ensure an orderly distribution of cash through the network of post offices across the country, their logistical planning collapsed in front of raw reality. At the end of March, dozens of citizens disregarding the containment and healthcare measures gathered in popular neighbourhoods to protest against delays in aid distribution, difficulties in the supply of basic food products and speculation on them. On 3 April – the first day of the payment of aid – lacking information on the distribution plan or merely in urgent need of means of survival, crowds of hundreds scrambled around post offices, risking destroying weeks of effort to contain the spread of the virus.

Second, despite being essential, the government’s socio-economic measures are costly and will weigh heavily on a shaky economy that was barely starting to show signs of recovery after the 2011 revolution.

To fund these measures, Tunisia has limited room for manoeuvre due to its lack of financial resources. Although it recently managed to gain financial support through foreign channels (including the IMF, the EU, Italy, Qatar, Saudi Arabia and China), part of this aid has been obtained in loans that will need to be repaid, while Tunisia has already been struggling for years under the requirements of an IMF plan. Internally, donations by private individuals and companies have remained limited and the socio-economic measures will mostly be covered by a readjustment of the annual budget, with the consequence of further delaying much needed reforms and development projects in the country. Moreover, while estimates have been made for a period of three months, uncertainties about a possible continuation of the crisis beyond this date – with the financial costs that this would imply – raise doubts about the country’s capacity to prevent an economic breakdown.

Even in the best-case scenario, the post-Covid period promises to be difficult. As a large part of the Tunisian economy relies on trade and tourism – with 60% of commercial transactions being made with China, France and Italy – the country is highly dependent on a swift recovery of its main economic partners, which is not yet guaranteed. The Tunisian authorities have revised their growth forecast from 2.7% to 1% for this year, but negative growth cannot be excluded if the crisis persists, and massive job losses and business closures seem hardly avoidable. Therefore, while the government’s rescue measures may have enabled the immediate socio-economic effects of the crisis to be contained, Tunisia’s long-term prospects seem somewhat grim.

In its fight against Covid-19, Tunisia is therefore not suffering from a lack of preparedness or anticipation by its ruling authorities, but instead is confronted by long-standing flaws that failed to be seriously addressed in the aftermath of the revolution and that now hamper effective implementation of the rescue measures. Despite this belated realisation which may result in substantial human and financial costs, the pandemic could also prove an opportunity to finally address long-neglected issues such as the unequal division of revenue and resources among the population, the heavy weight of the informal sector in the economy, the structural problems in the health sector and the regional disparities in terms of social and medical coverage – all core demands of the protesters during the 2011 uprising. Tunisia’s Prime Minister recently underlined both “the threats and opportunities” of the current crisis. Whether the opportunities or the threats will eventually prevail is what the next few weeks will tell.