Will the 11th congress of the Tunisian Islamist party Ennahdha mark a post-Ghannouchi turn? With his elections in 2012 and 2016 as head of Ennahdha, Rached Ghannouchi (born in 1941) indeed reached the limit of two successive presidential mandates enshrined in the party’s internal rules (article 31). What is at stake behind Ghannouchi’s likely departure and what are the likely scenarios for a post-Ghannouchi Ennahdha? 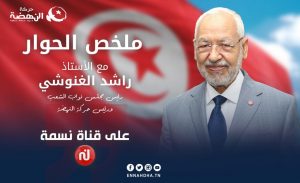 Grasping what is at stake behind Ghannouchi’s likely departure requires understanding of his historical centrality in the Tunisian Islamist movement. In the 1970s, Ghannouchi co-founded the Islamic Group (al-jama’a al-islamiyya), which in 1981 became the political party Mouvement de la Tendance Islamique (MTI) and was renamed Ennahdha in 1989. He was selected as president of the movement multiple times (1979, 1981, 1984, 1991) and represented it abroad while in exile (1990s-2011), which allowed him to acquire a moral quasi-monopoly on the presidency.

Ghannouchi is also the party’s central intellectual figure. His 1993 book Public Liberties in the Islamic Statewas designated the “most important political and intellectual document of the movement’s heritage” by the 2012 Congress. After the revolution, he spearheaded the party’s most strategic and controversial decisions, such as the alliance with Nidaa Tounès (a modernist party which integrated former Ben Ali officials) in 2014, the ‘specialisation’ (often wrongly interpreted as a separation from politics) in 2016 and the coalition with Qalb Tounès (headed by the controversial media mogul Nabil Karoui) in 2020. Crucially, Ghannouchi also holds the party’s purse strings.

Over the years, however, Ghannouchi’s rule has also elicited internal opposition. In 1990, several leaders held him personally responsible for the confrontation with the Ben Ali regime and demanded his resignation and for him to be blacklisted from all leadership positions. In the 1990s-2000s, his confrontational line towards the regime was criticised by a large section of the movement that advocated national reconciliation.

After the revolution, two major episodes crystallised the internal opposition to Ghannouchi. At the 2016 congress, several leaders including Abdelhamid Jelassi and Abdellatif Mekki proposed that half of the executive bureau should be elected and the other half nominated by Ghannouchi (until then the party president chose the entire bureau). Ghannouchi threatened to resign and the proposal was eventually rejected by a small minority (52 %). Opponents denounced the “the excessive concentration of power” in Ghannouchi’s hands.[1]

The second crisis occurred when Ghannouchi unilaterally decided to side-line 30 of the 33 heads of electoral lists in the run-up to the October 2019 legislative election.  The candidates excluded included internal critics: Jelassi (Tunis 2), Mekki (Tunis 1), Samir Dilou (Bizerte) and Mohamed Ben Salem (Zaghouan). The decision was denounced as an unacceptable violation of the party’s internal rules, which state that the president may only replace 10% of the candidates and needs the previous approval of the consultative council (majlis al-shura). After the election, the internal conflict centred on the choice of a prime minister: while Ghannouchi pushed in favour of Habib Kchaou, the majlis al-shurachose to support Habib Jemli. When Ghannouchi agreed with Nabil Kaouri (president of Qalb Tounès) to propose Fadhel Abdelkefi as prime minister, many council members demanded that Ghannouchi should step down.

Likely Scenarios for the 11thCongress

The multiple postponements of the 11thcongress in the context of the Covid-19 pandemic have raised suspicions within the party that Ghannouchi is delaying or preventing the event to stay in power. In March, in an internal document several leaders emphasised “the need to convene the 11thcongress before the end of 2020” and called for “an alternance of leaders.” On May the 22nd, noting that the congress would not be held that month as initially planned (Ghannouchi had just dissolved the executive bureau), Mekki reasserted the “pressing necessity” to organise the congress quickly. The party has recently announced that the 11thcongress will be postponed to 2021, although this remains to be confirmed. In the case of a continuing delay, a possible scenario would be Ghannouchi staying in power   as interim president.

The possibility of seeing an opposition candidate rising to prominence seems remote. The main opposition figures have either resigned (Jelassi in March) or are not popular enough within the party to be elected president (Mekki, Dilou, Ben Salem). Moreover, Ghannouchi’s potential departure will most likely not mark a handover of power to a new generation largely favourable to a transformation of the party’s direction but which faces a multiplication of resignations (Hichem Laarayedh, Zied Boumakhla). Other less controversial personalities hailing from the movement’s second generation (born in the 1950-60s) and closer to Ghannouchi, such as Ali Laarayedh, Noureddine Bhiri, Abdelkrim Harouni and Noureddine Arbaoui, appear to be in a better position. Other relatively younger cadres (Rafik Abdessalem, Ghannouchi’s son-in-law, Naoufel Jammali) could also claim the presidential seat (Lotfi Zitoun is too controversial within the party for his progressive views on drugs, homosexuality and the use of religion in politics), although any definitive prediction is impossible. It would therefore be plausible to see Ghannouchi pushing for an heir to his political line such as Rafik Abdessalem, in the case that he decides to not be a candidate for his own succession.

A third plausible scenario is that the congress votes to change article 31 of the party’s statute in order to allow for a third consecutive presidential term. At this point it is difficult to assess whether a majority would be in favour of changing (or suspending) this provision, but this eventuality should not be disregarded given that previous congresses have usually revised the parties’ statute to adapt to the internal equilibrium and to the political circumstances.[2]Fearing this scenario, a petition signed by 100 Ennahdha leaders in September 2020 (including Dilou, Mekki, and Ben Salem) called on Ghannouchi to commit to keeping the party’s statute untouched and to abstain from running for a third presidential term. The petition was vehemently dismissed by Ghannouchi as another attempt to exclude him, with reference to the way the previous congress had unfolded. Ultimately, the scenario of Ghannouchi’s re-election could trigger another wave of departures from the party.

The Future of Ennahdha

The 11thcongress will have a significant impact on the party’s future, as a change of president could provide a unique opportunity to reform Ennahdha’s direction model and to redefine its political project.

The first issue is whether the party will transit from a charismatic leadership – some would say authoritarian – to a more inclusive and collegial direction. Many leaders (Dilou, Zied Laadhari, Zoubeir Chehoudi) call for a more democratic and less vertical model of governance; they lament that Ennahdha has democratised Tunisia but not itself.

A change of direction is also connected to the broader issue of Ennahdha’s ‘national role’ (according to its internal vocabulary). What identity will new leaders give to a party that has theoretically abandoned its historical religious project and that since 2011 has prioritised compromise over the pursuit of political objectives? Why is the party so adamant to preserve consensus and what costs does this entail for its political project and its electoral base? More broadly, what is the purpose of the party beyond merely ensuring its own self-preservation?

The post-Ghannouchi Ennahdha will also have to address socioeconomic issues which have hitherto been marginalised by the priority it has given to rooting itself as a key political force in Tunisia. Ennahdha’s legitimacy as a revolutionary force and its capacity to tackle socioeconomic demands are contested by neo-revolutionary and sovereigntist parties (Itilaf al-Karama) and its electoral base has shrunk three-fold since 2011. As Ghannouchi himself declared, “Tunisia will create in the near future its development model, the same way it has created its democratic model.”

From the same Author, read also:

Tunisia’s 2019 Elections: Beyond the Islamists vs. Secularists Cleavage (December 2019, with Ester Sigillò)