Housing First transformed homelessness in the USA, could it do the same for refugee resettlement?

Once again, the world’s refugee crisis has taken centre stage, with the count rising to more than 26 million refugees worldwide. At the current rate it will take 18 years just to meet today’s refugee resettlement needs.

What might hold clues to the large-scale, systemic change that refugee resettlement needs? Homelessness.

The parallels between homelessness and refugee resettlement abound.

Homeless individuals and refugees experience pronounced trauma that dislodges them from their homes; they experience further trauma waiting in temporary situations; there are not enough places for them to settle long term; and many feel sympathetic, but long-lasting solutions are rare.

Two decades ago, homeless service leaders in the United States proposed something seemingly radical: they could end homelessness. They implemented Housing First, a model that changed the order of services and slashed rates of chronic homelessness. Even more, it was cost effective.

It developed from an innovative service model into a nationwide homelessness response system – one that is ready and able to respond when something, like the recent uptick in homelessness numbers, occurs. Housing First fundamentally transformed how to tackle homelessness. Here’s what refugee resettlement policymakers and practitioners could learn from it.

These recommendations are focused on individuals with UNHCR-designated refugee status who are waiting for third-country resettlement, which does not include asylum-seekers and migration more broadly. While these situations require recommendations, they are not this blog’s focus.

What refugee resettlement can learn from Housing First

1. Accept that it might not be working and be dogged in finding what works.

Housing First developed because practitioners refused to believe homelessness couldn’t be solved. When they kept seeing their chronically homeless clients fail in the ‘staircase model’ of service delivery, they made a new one, putting housing as the first step instead of the last.

Despite unprecedented levels of international commitment to solving the refugee crisis, the same three durable solutions continue to be the central emphasis and targeted expansion is explicitly long-term. Policymakers need to look for ideas like Housing First that fundamentally change the approach, not just improve what already exists. The Global Compact on Refugees’ complementary pathways initiative, while small-scale, is a promising example of this. We have to be dogged about finding new solutions, if we want to ever be able to say we can end the refugee crisis.

2. Seek every way to reduce the harm while refugees are waiting.

It was harm-reduction (a principle borrowed from the recovery world) that led Housing First advocates to say: first housing and then all the other supportive services. Housing does not solve every issue, but it does reduce the additional trauma that results from remaining homeless.

Resettlement might be the best long-term outcome for refugees, but it’s not unlike the former homeless services staircase model with many long intermediary steps before the end goal of a new home is even a remote possibility. 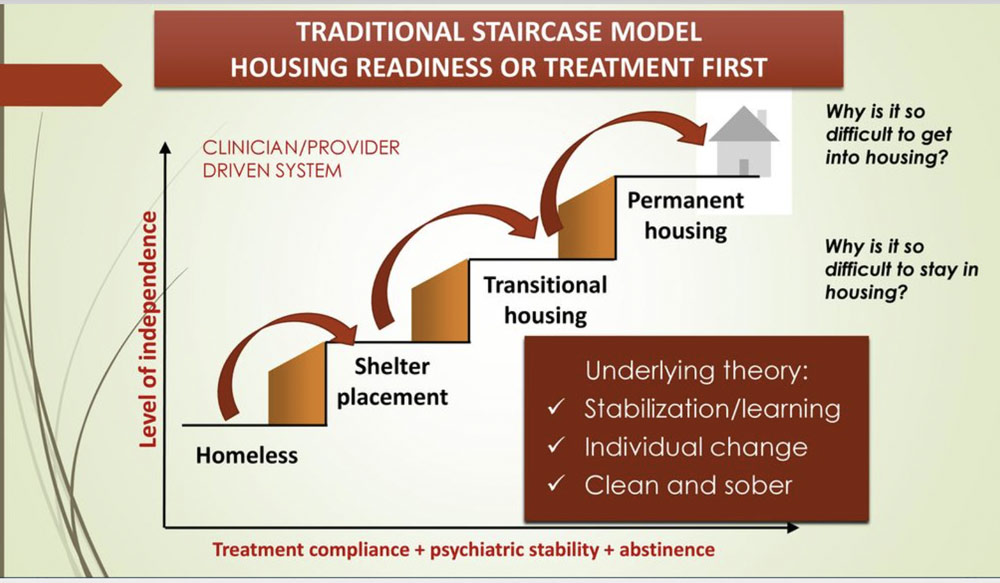 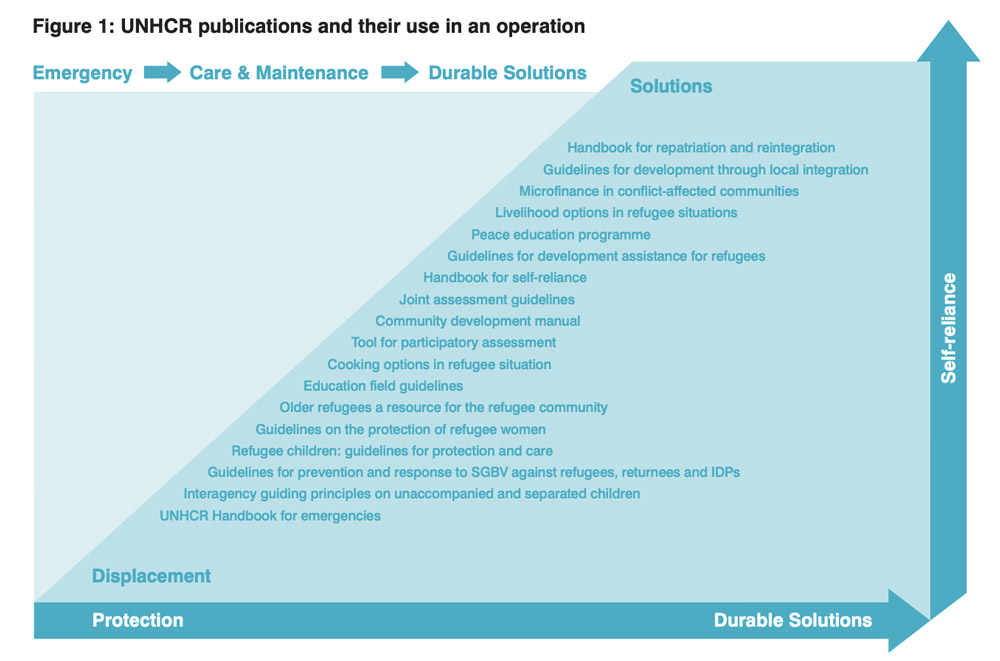 Given the dearth of available placements (only one per cent of those in need will be resettled), harm-reduction should make resettlement providers consider the opposite approach: services first and then eventually a home (third country placement) if it becomes available. This would lead to increased services and investments in the camps and urban centres where refugees wait, working to reduce the harm that refugees experience now, while waiting for a future ideal.

3. There have to be more than three solutions; let’s let refugees determine them.

Housing First believed in clients’ abilities to problem-solve. Newly homeless individuals are asked to brainstorm solutions that could prevent them from staying homeless, with answers ranging from needing a bike to get to work to helping pay off arrears. Once housed, supportive services are offered, but not prescribed; it’s up to the individual to decide what help they need.

Resettlement services already strongly promote self-reliance; however, we should expand ‘self-reliance’ from simply an objective to foster while refugees are waiting for a durable solution to a solution in and of itself. We should pilot asking refugees what they need (e.g. What do you need to make you feel safe for the next six months?) and then work to provide that. Having only three set solutions for 26 million people limits the refugees’ initiative and assumes that we know the solution for every one of their lives.

4. We need a picture of what success looks like, and how to know if we’re getting closer to it.

Housing First developed into a system as providers focused their target: getting people housed. From there, the US federal government released a strategic action plan, setting a nationwide goal to make homelessness rare, brief, and one time. The goals were easy to understand, memorize, and track. They showed everyone from senior policy officials to mayors to case managers what to aim for.

The Global Compact on Refugees outlines four objectives and three sets of indicators to track progress. No one can keep track of whether they’re working toward outcome 3.2 or toward indicator 4.1.1. While sound metrics are needed for performance monitoring, policymakers have to paint a clear picture of what success is – one that orients the entire resettlement field – and how we’ll know if we’re getting closer to it.

And in order to do that, resettlement providers have to drill down on what falls into the scope of its mandate to ensure international protection of refugees, and what does not. For example, the Geneva Convention defines UNHCR’s core principle as making sure refugees are not forced back to a country where they would be in danger. If that was the only stated definition of success, how would current activities align or not?

The United States Interagency Council on Homeless (USICH) led the federal response to homelessness. Having no program budget or operational duties, USICH was able to align 19 federal agencies, keep a high-level vision, develop plans, and broker difficult policy decisions. It also created an infrastructure for coordinating with local governments and the private sector to get buy-in from the field in executing high-level strategies.

Convenings, forums, and councils abound in the resettlement community (Annual Tripartite Consultations, Global Refugee Forums, High-Level Officials Meetings to name a few). However, no independent agency manages coordination; instead UNHCR must serve the role of planner, evaluator, and executor. Given the sheer size and complexity of resettlement, an independent coordinating body is needed to set strategy and align efforts. USICH proved that coordinating is a full-time, yet much needed job.

There is a crisis. Of 26 million people. Let’s use the lessons others have provided to move the needle forward.

Stephanie Acker is a Policy Leader Fellow at the European University Institute’s School of Transnational Governance. Her work focuses on policy and practice solutions to close the refugee resettlement gap. In this blogpost she draws from her professional experience to advocate innovative solutions to the housing needs of refugees. This blogpost is part of our forum on the transnational governance of migration. The views and opinions expressed in these posts are the author’s own.