Older generations are often reported to more likely be opposed to or concerned about immigration, although elderly people can also benefit from immigration’s positive impact on the fiscal sustainability of pensions and health systems and lower costs of social care. In this blog post I ask what research tells us about generational differences in attitudes to immigration: are older generations really less tolerant of immigrants and immigration? I argue that the evidence suggests a more nuanced picture than commonly assumed in public debates.

Why are there generational differences in attitudes to immigration?

While research shows that attitudes to immigration vary across generations, there is less agreement and ongoing debate about how and why age affects attitudes. Scholars have offered various theories and explanations for the ‘age gap’ in immigration attitudes. One explanation is that aging or changes over the life cycle produce differences between age groups. As people age, judgments and evaluations of social reality change. Biological and physiological processes that change with age affect people´s cognitive abilities. They can lead to stronger prejudice among older adults because they have a reduced capacity to inhibit biased associations that come to mind automatically. This argument rests on strong assumptions about an existing underlying overall prejudice that people are either better or worse at hiding with age which, in my view, does not seem very plausible.

A different theory, the so-called “life-cycle argument”, suggests that as people age they occupy different positions in the social structure, change roles, relationships and status, and therefore also their attitudes. Yet, research has shown that attitudes to immigration are based on an affective and symbolic rather than rational basis and they have been found to be remarkably stable over time and robust to major economic and political shocks.

Another explanation why we observe differences in immigration attitudes across age groups is that shared experiences during formative years (youth) shape values and attitudes that might persist over the life course of cohort members. Personal, social, cultural, political, and historical changes affect young citizens disproportionately, thus creating generational differences in patterns of political attitudes and behavior. This line of scholarship comes from a long tradition of social science research regarding early political socialisation. Early life experiences are generally considered to form the basis for political attitudes based on informal learning through interactions with parents, peers, schoolmates etc. The impressionable or formative years between childhood and adulthood are believed to be a crucial period during which citizens form the basis of political attitudes and behaviors. There is no clear consensus on when exactly these years end, but the general agreement is that they do not extend after the age of twenty-five. Fundamental changes in societal attitudes and values thus happen gradually, as younger generations replace older ones, due to significantly different formative experiences.

Recent social science research on attitudes to immigration confirms the existence of ‘cohort effects’, wherein generations are socialised under different circumstances and in consequence retain distinctive attitudes over time. In other words, while individuals´ attitudes to immigration remain remarkably stable after a certain age, their cohorts’ experiences during formative years have a long-lasting impact on their attitudes towards immigration even later in life and lead to differences between generations. Research shows that cohorts that have lived through landmark immigration events during their youth, have entered the labour market during a recession, and/or were socialised in strong far-right anti-immigration party presence or in a particular political climate have distinct immigration attitudes compared to other cohorts.

Contrary to common belief that is often depicted in the media, the generational hierarchy in anti-immigration attitudes is not strict. In several countries, older cohorts are not more opposed to immigration and immigrants than all younger cohorts. In other words, as shown in Figures 1 and 2, it is not simply a matter of older individuals being more against immigration than younger ones. Figure 1 shows a sum of three attitudes towards the effect of immigration (y-axis) across individuals born in different 5-year intervals (cohorts) (x-axis). As higher scores mean more positive attitudes to immigration, Figure 1 shows that in many countries, younger cohorts are not necessarily always more negative towards immigration when compared to older cohorts. Figure 2, on the other hand, shows the percentage of respondents that agree with the statement that natives should be given priority when jobs are scarce (y-axis), at different time-points (x-axis) and for different generations. Again, Figure 2 shows that in many countries some older generations are more positive in their openness towards immigrants compared to some of the younger generations. 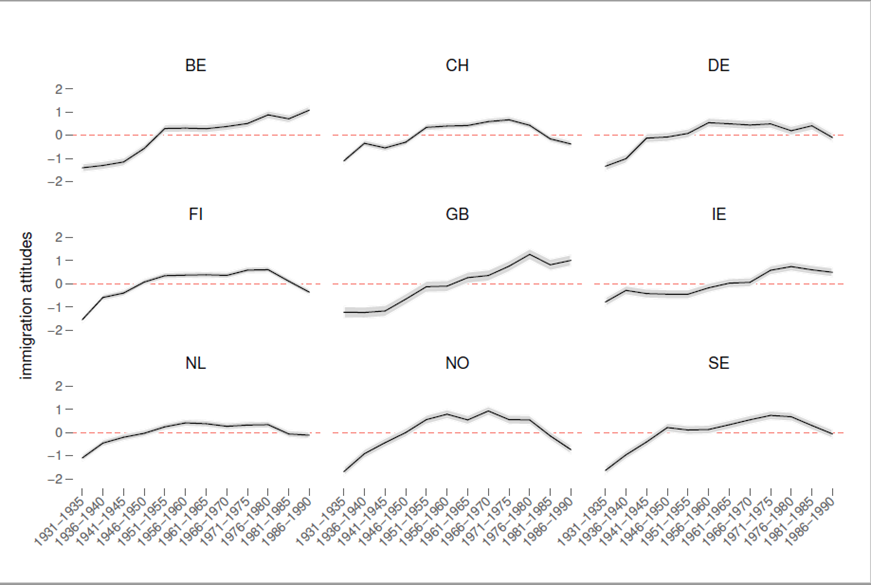 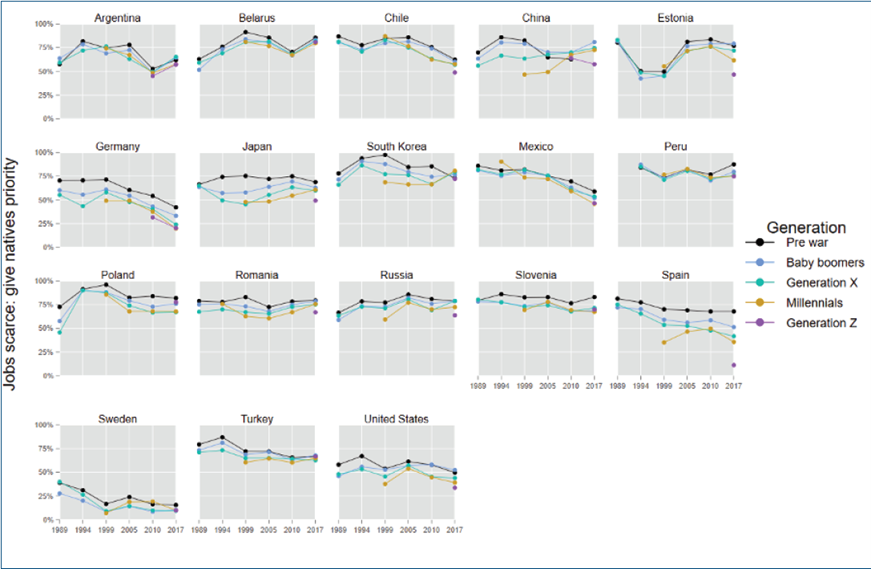 Figure 2. Attitudes to immigration by generation (1989-2017).
The percentage of respondents that agree with the statement that natives should be given priority when jobs are scarce (y-axis), at different time-points (x-axis) and for different generations (based on the legend). Source: Gonnot, J. Dražanová, L. & Brunori, C. Global trends and continental differences in attitudes to immigration: thinking outside the Western box, Policy Briefs, 2020/42, Migration Policy Centre.

Education is often found to be a powerful predictor of pro-immigration attitudes. As younger cohorts spend, on average, more years in education, many might expect younger generations to become more favorable to immigration in the future. This expectation lies at the heart of Inglehart´s modernisation theory, which argues that rising levels of (higher) education amongst the younger generations will lead to the spread of value orientations that emphasise self-expression and quality of life over economic and physical security. However, there are several caveats we must remember before we proclaim education as the universal cure for the public stance towards immigration.

There is strong evidence that certain values and liberal attitudes, such as authoritarianism, are related to attitudes to immigration, with younger cohorts seemingly becoming less authoritarian. While education is often found to be a powerful predictor of liberal attitudes in Western Europe and the United States, I have shown in my own research when analysing tolerance and authoritarian attitudes of about 50 000 individuals in more than 50 countries worldwide, that the effect of education is not universal. In many countries, there is no significant relationship between obtaining a higher degree and having more liberal attitudes while in others there is, see Figure 3. What explains this? 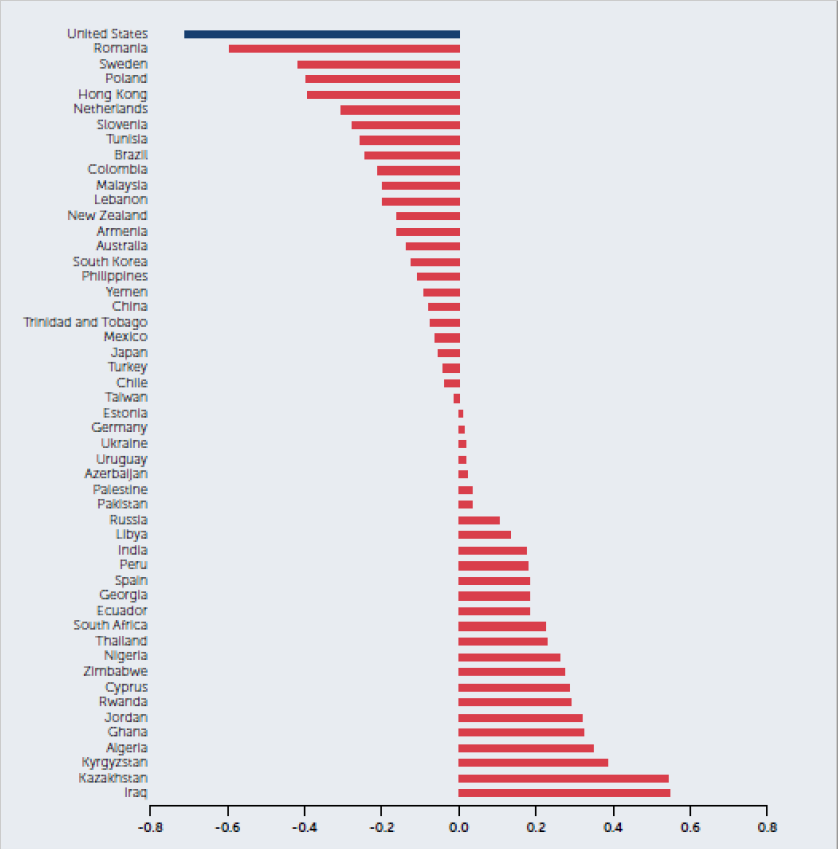 Figure 3: University education and its association with authoritarianism.
Note: These results are based on a multilevel cross-country analysis. The bars represent the relative strength of the association between post-secondary education and inclinations toward authoritarianism, as compared to the average across the 51 countries considered in this analysis. Source: Carnevale, A., Smith, N., Dražanová, L., Gulish, A. & Peltier Campbell, K. 2020. The Role of Education in Taming Authoritarian Attitudes. The Georgetown University Center on Education and the Workforce.

Social-psychological theories argue that education leads to a better understanding of the world around us and thus higher self-confidence and better analytical thinking. University-educated individuals feel less threatened by others and by new phenomena such as migration. Nevertheless, research shows that liberal arts majors are, for instance, less inclined towards authoritarianism than business or STEM majors. Thus, the effect of university attendance on attitudes does not transmit equally across subjects. Moreover, a panel study conducted on adolescents in Switzerland as they go through education shows great differences between individuals rather than within individuals in their attitudes to immigration. This means that differences in educational groups are possibly due to “self-selection” rather than the effect of education itself.

Socialisation theories suggest that values transmitted by the educational system of the country reflect the dominant culture. Since values are transmitted to the individuals at a young age through the educational systems to obtain a “liberalising” effect, educational institutions must promote certain (democratic) values, such as tolerance. This is not always the case. Contrary to common belief, there are non-democratic roots to mass education. State-controlled primary schooling emerged a century before democratisation as primary education can also serve the goals of autocrats by promoting loyalty, nation-building, and/or industrialisation. For education to lead to more tolerant/liberal attitudes certain conditions, such as a certain length of democracy in the country, must therefore be fulfilled.

Why is all of this important?

Why is it important to understand whether and how people change their attitudes to immigration as they age? If attitudes are responsive to external discourse and changes in their local environment, people would respond by changing their attitudes. This would, for example, give (non-)governmental and European information and media campaigns regarding migration a lot of weight and potential for societal change. On the other hand, if peoples’ attitudes are learned early, their settled dispositions should be relatively resilient to change. This means that these campaigns would have relatively little effect when targeting the adult population and should focus on children and adolescents. The latest social science research shows that for more than 500 attitudes, survey responses reflect settled dispositions developed before adulthood rather than responsiveness to external factors. Thus, most changes (if any) in public attitudes are possible only within the young.

Why is understanding how education affects attitudes to immigration important? Education is often proposed as one of the most important channels of societal change for younger generations. Understanding how, and if, ideological differences in attitudes to immigration can be diminished through education is therefore crucial for a well-functioning democratic society. Nevertheless, as argued in this blog post, certain other societal conditions need to be fulfilled for education to have a a positive effect on immigration attitudes.