Concerns About Social Conflict Might Explain Immigration Preferences – Here’s Why

Migration is likely to remain one of the world’s most important political challenges throughout the twenty-first century. Simultaneously, public attitudes to immigration increasingly constitute a, if not the, major parameter for policy makers when attempting to react to these challenges and opportunities in every corner of the globe. As such, understanding what explains attitudes to migration is of vital substantial importance, as well as scientific interest.

Geographically, so far, explanations for variation in attitudes to immigration have tended to focus on the USA, (Western) Europe and Australia, while theoretically, motivations behind attitudes to immigration have been typically conceptualised either in terms of the ‘economic competition’ or ‘cultural threat’ that immigrants are perceived to pose to the individual or their ‘in-group’. In our recent article for the Political Quarterly, we propose and test a third possible factor: perceptions of the effect of immigration on social conflict.

Whereas the ‘economic competition’ theory supposes that individuals oppose immigration for typically egocentric reasons such as employment or taxation, the ‘cultural threat’ approach suggests the primary concern is maintaining the cultural norms of the ‘indigenous’ majority. There are at least three reasons to think that individual immigration preferences may also be affected by the perceived risk to social conflict posed by immigration.

First, conservative individuals have repeatedly been shown to be more opposed to immigration, and a primary concern of conservatism is the maintenance of societal order and the avoidance of risk, whereas socialists and liberals are more likely to conceive immigration as a means of, respectively, achieving greater human equality or enhancing personal freedom.

Second, a number of personal, rather than political, values have been associated with attitudes to immigration in a manner that suggests a potential motivation of avoiding social conflict, as well as upholding cultural traditions. Third, while there is generally weak evidence to support the notion that immigration has adverse economic effects on native citizens, there is a large literature presenting evidence that greater ethnic fractionalisation in societies can lead to social conflict.

Moreover, the perception that immigration leads to social conflict is a distinct motivation in that it does not theoretically require individuals to be motivated by a desire to ‘win’ conflict between their ‘in-group’ and ‘out-groups’ (immigrants), either economically or culturally, but instead simply prioritise the avoidance of social conflict. Accordingly, individuals who stand to gain economically by immigration may oppose it and vice versa, and those whose culture deviates from the majority-group’s culture (including immigrants and their descendants) may also oppose immigration according to our theory.

Using 2017-2020 WVS data, Figure 1 provides an initial overview of how the 49 countries vary in the extent to which their citizens agree or disagree with the proposition that immigration leads to social conflict. 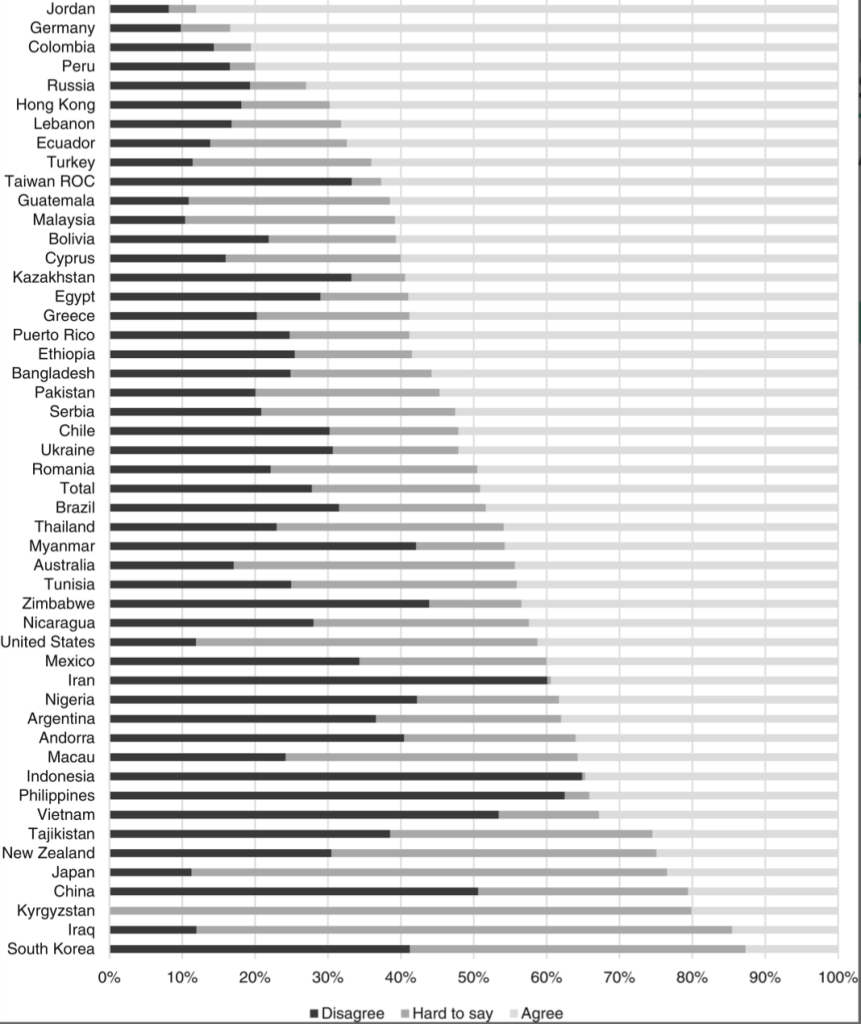 In Figure 2, below, we can see that in a large majority of countries, citizens simultaneously believe that immigration ‘leads to social conflict’ and ‘strengthens cultural diversity’, despite the former being a negative perception and the latter being positive but that there is no correlation between these two. This suggests that these are distinct concepts. 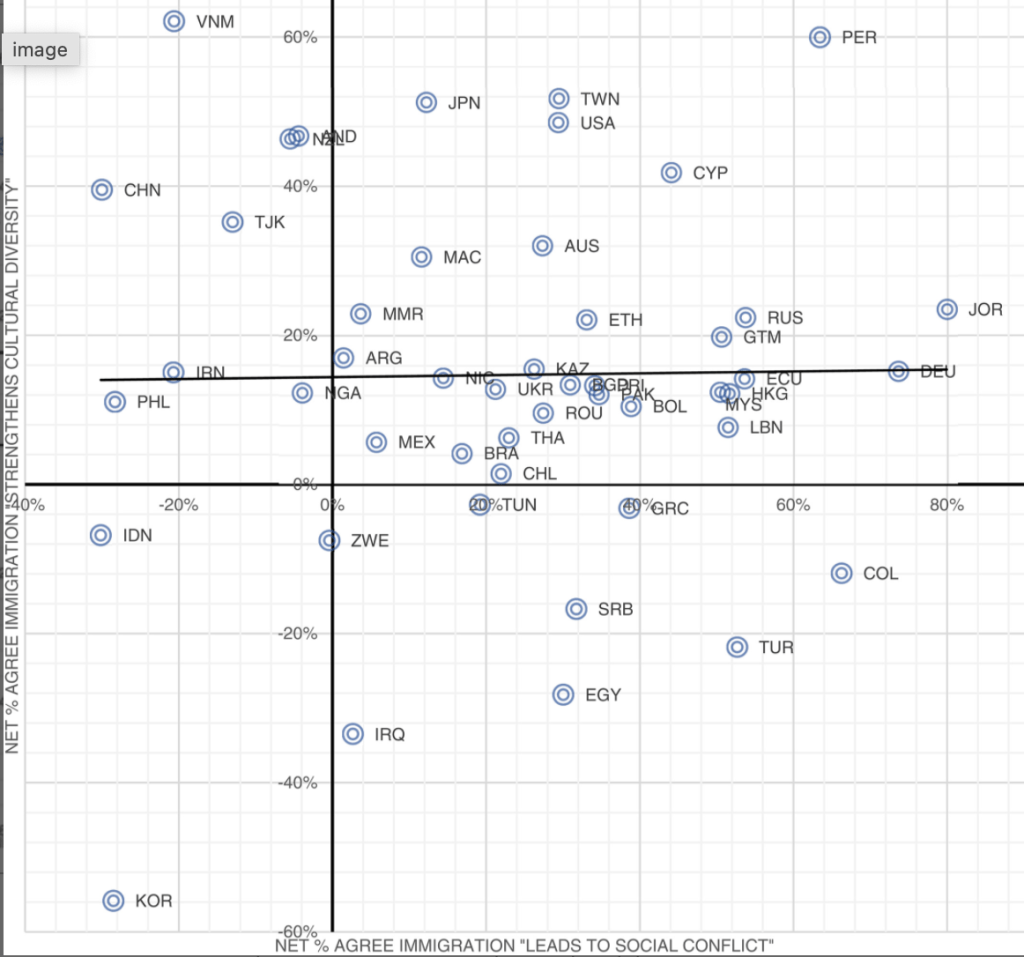 We then consider the predictive power on preferred immigration policy of agreement that immigration causes social conflict. After the battery of questions about perceived effects on immigration, the WVS (2017–2020): ‘How about people from other countries coming here to work? Which one of the following do you think the government should do? (1) Let anyone come who wants to; (2) let people come as long as there are jobs available; (3) place strict limits on the numbers of foreigners who can come here; (4) prohibit people coming here from other countries.’ Unsurprisingly, using separate multi-logistic models with country fixed effects, each of the three perceptions—on unemployment, culture, and social conflict—have statistically significant effects and each of their respective three models explain a similar amount of variance in policy preferences

Finally, we show that the socio-demographic predictors—in terms of age, gender and income—of the perception that immigration leads to social conflict is similar to that of other immigration perceptions. However, the effect of tertiary education is positive, contrary to other perceptions. We offer a number of possible theoretical explanations for this.

In our article, we show that in most countries globally, citizens are more likely to agree than disagree that immigration leads to social conflict and that levels of concern about the effects of immigration on social conflict are higher than those regarding unemployment or culture in sixteen of the countries surveyed. We also consider the predictive power of this perception as well as its own, in some ways, distinct determinants.

There are several political and policy ramifications of our proposed explanation for opposition to immigration. In policy terms (though there is no ‘one size fits all’ approach) our findings suggest that, in some contexts, contemporary global initiatives interested in maintaining support for immigration should also aim to reduce perceptions and, more importantly, realities of social conflicts. This includes via local political processes at state and sub-state levels worldwide.

A longer version of this article originally appears in the Political Quarterly journal.