Doing the math to end the refugee crisis: Is it possible?

Despite the number of refugees more than doubling in the past decade alone, there’s continual celebration of one of the Global Compact on Refugees’ initiatives to resettle one million refugees, cumulatively, over 10 years.

Is finding solutions for one million of the world’s more than 20m refugees the best we can do?

Responsibility-sharing is viewed as the answer

Within the Compact, the term responsibility-sharing appears on roughly every second page. It was in many ways the mandate that led to the creation of the Compact and has taken a central role in any conversation about refugee response. The concept dates back to preamble of the 1951 Convention and is generally perceived to be some equitable arrangement of financial and physical hosting/resettling responsibilities between states. However, despite it being viewed as a crucial pillar for how the world will collectively respond to refugees, there is no agreement on what it means.

The many proposals that have been made about responsibility-sharing are largely all frameworks, which have merits, but can also remain just that—a frame of how to think about the work. If we want to help move states towards increasing their commitments to refugee protection, then what is needed is a plan for how to do the work.  And good planning requires us, as a first step, to look at numbers.

While some balk at anything that reduces a refugee to a number, in light of an intractable, international crisis of immense human suffering, at the barest minimum, we should at least understand the figures that would be needed to solve it.

So what numbers would it take to solve the refugee crisis? Could we make the math work?

In this policy brief I model an example of what responsibility-sharing could look like in order to significantly increase the number of durable solutions for the world’s more than 20m refugees by 2030.

Since the number of refugees doubled from 2010 to 2020 an impactful goal would be trying to cut the current number in half, bringing it back to 2010 levels by 2030. To do that, we would need to find 10m durable solutions (placements) in other countries for refugees.  We could do that with this: 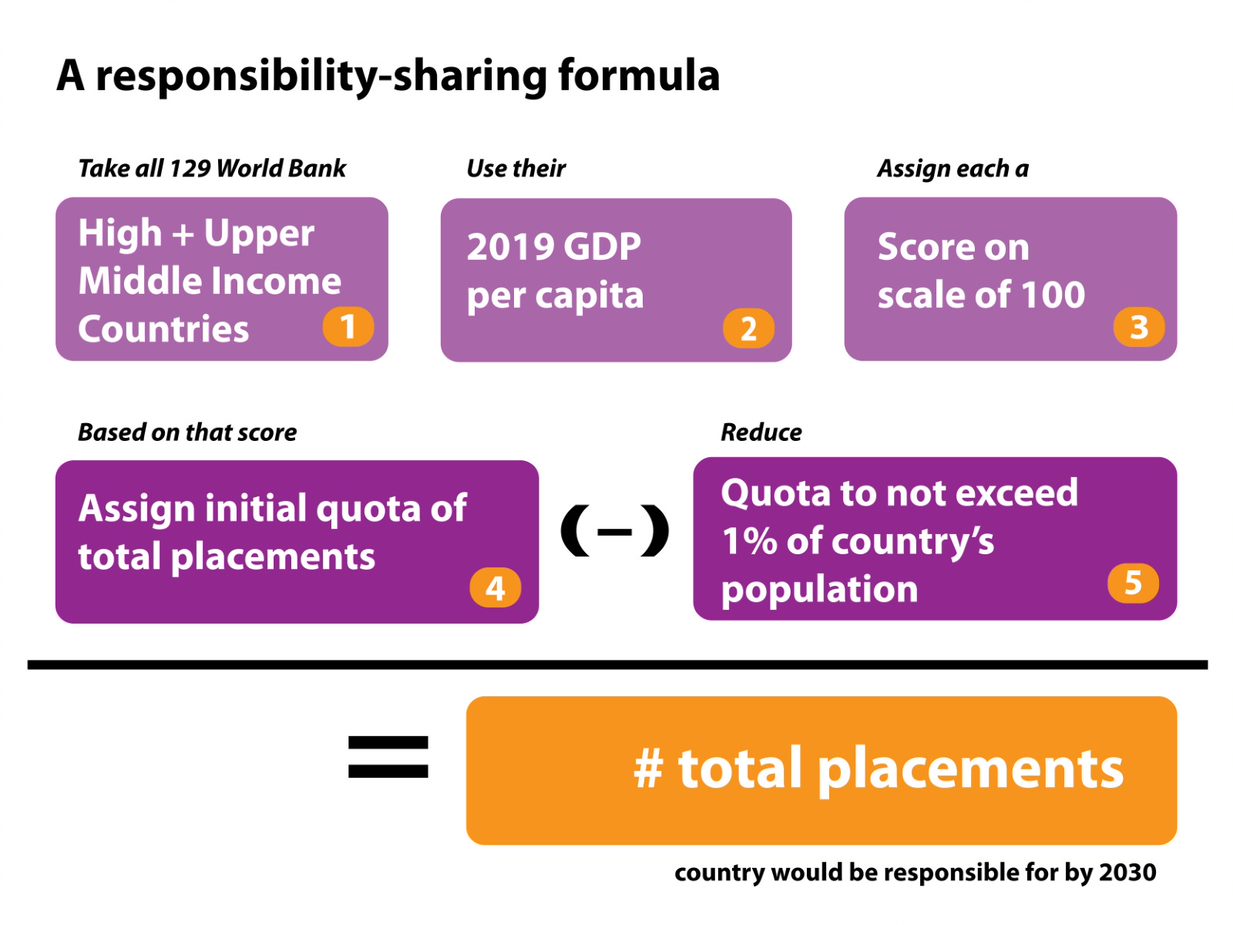 What do we find when we model responsibility-sharing? It makes a big impact. 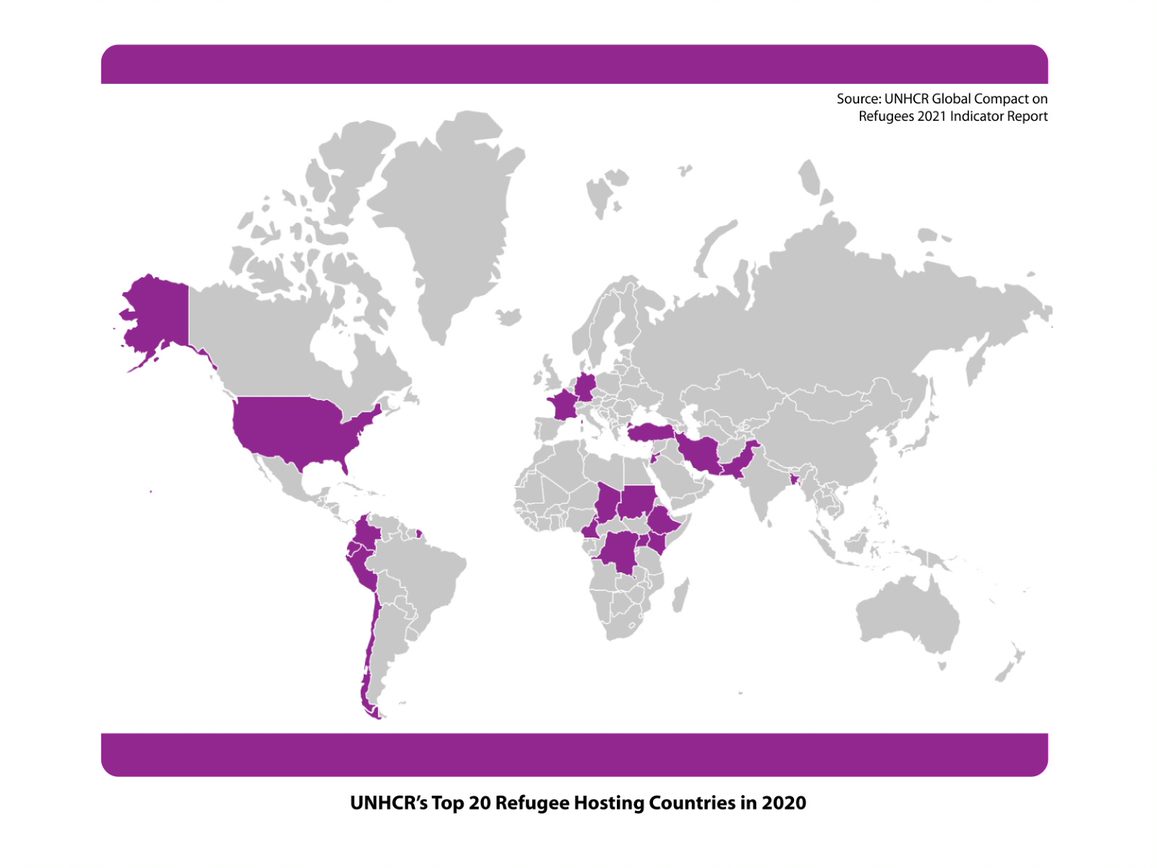 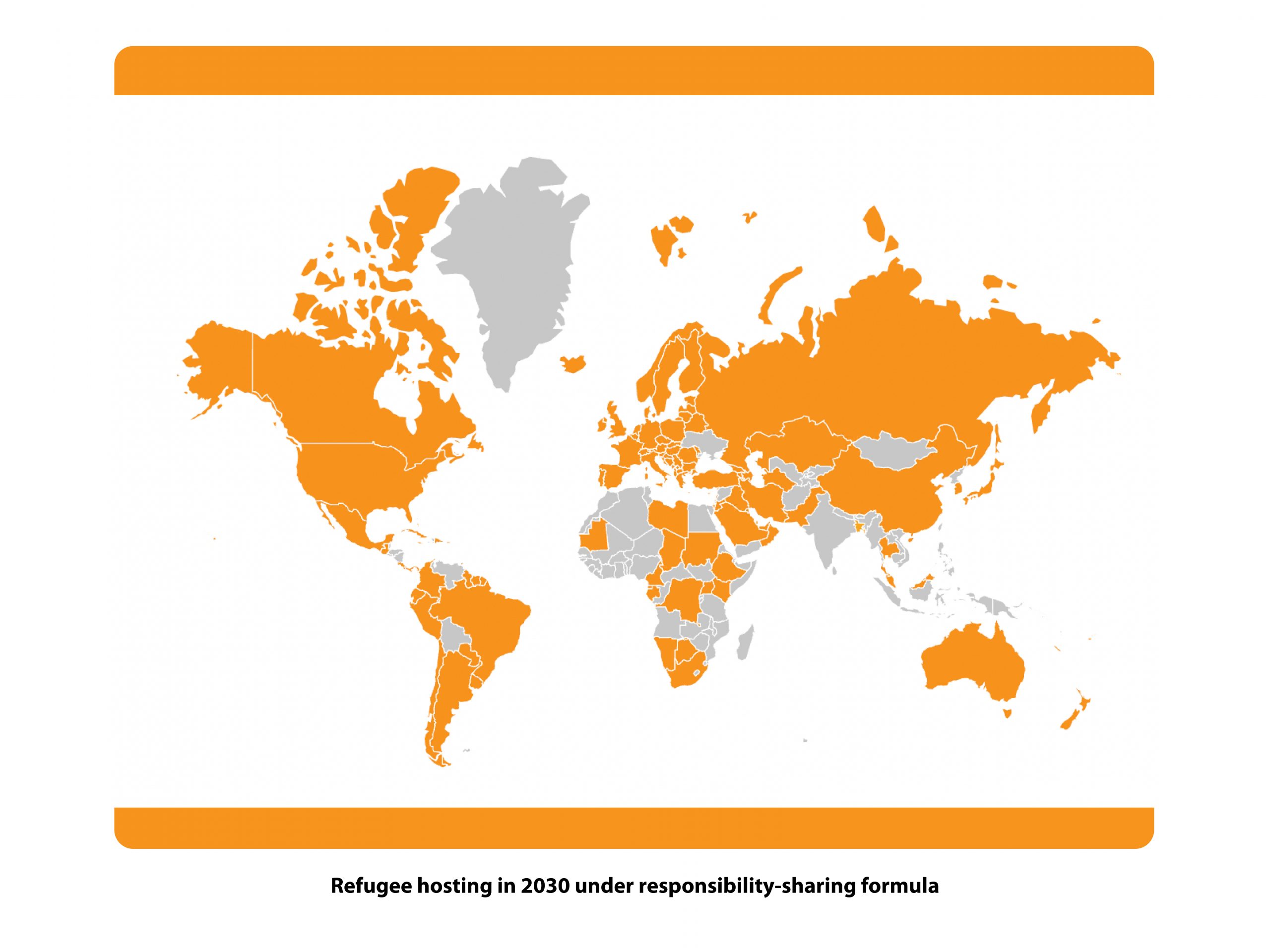 There are some limits to the model that are worth noting: It uses a narrow definition of refugee (only someone with designated refugee status and under UNHCR’s mandate) and a really straightforward formula (using only 3 metrics to allocate placements) which impacts the feasibility and viability of it (i.e. could a country scale to resettle this many refugees and more importantly would refugees want to go there). It also assumes all states are on board and ‘ready to do their fair share,’ whatever it may be and only focuses on finding new durable solutions and doesn’t have a way to account for all the ways a country is already contributing (this is why we need broad use of DARA’s proposed Refugee Response Index).

Even with these limitations, there are THREE reasons why we need to model responsibility-sharing and trying to make the math work

We have to attempt to translate frameworks into plan— even basic ones such as this—with actual numbers and dates, because refugee protection needs do not exist in frameworks, but in actual numbers—it is the number of refugees that is large, that is growing, and the number of solutions that is lacking. Thus, our responses need to be anchored with actual numbers, even if it is quickly apparent how difficult the task is. While states might be a long way from deciding how to share responsibility, modelling is needed to define the universe of what needs to be shared, and then to assess how close (or far) states are from meeting that.

Behavioural scientists describe that successful social change often occurs when leaders paint ‘a destination postcard’—a clear and captivating picture of where they are trying to head. A key example of this is from Donald Berwick’s 2004 speech to kick off a campaign to reduce hospital mortalities when he made it clear to his colleagues where they were trying to head:

However, when it comes to refugees, government officials are not heeding this wisdom; ‘more’ responsibility-sharing is not a number, ‘urgently’ as mandated by the UN Secretary General in 2016 is not a time. It is at best ineffective and at worst irresponsible to try to galvanize contributions to increasing refugee protection without defining the hoped-for impact. Modelling responsibility-sharing helps to paint a destination postcard—enabling a goal to be set and vision to be cast of what we could collectively accomplish.

Countries are going to celebrate their contributions to refugees as important and significant (read their statements about what they believe they are contributing here and here); they are going to feel like they are doing their part unless they have a benchmark to which to compare their contributions. Modelling responsibility-sharing allows advocates to anchor high—which negotiations experts know matters—with countries in setting their resettlement rates, deciding on local integration policies, and making financial contributions. There is no guarantee that countries will then rise to meet such a large need, but it should be obvious to them and everybody else the difference between a) what is needed and b) what they are offering.

Combining ambitious country asks with the previously described ‘destination postcard’ is especially powerful. If anyone is hoping to increase what states contribute, which is a better approach?

‘The problem is so bad, we need all the help we can get. Each year we’re trying to make small improvements that likely won’t change the scope of the entire problem at all, but any individual life saved is worthwhile so whatever [your country] can contribute would be great.

‘We could cut the number of refugees worldwide by close to half, if [your country] does [x] by this date.’

Maybe finding 10m solutions in a decade is preposterous, but a tangible example of responsibility-sharing as modelled above, suddenly makes it seem certain that we could at least meet the Compacts’ goal of one million solutions, yes?

How many refugees would your country be responsible for in this model?

Read the report to find out.