Are ethnic minorities in the UK spatially integrating?

The spatial segregation of migrants and their children—also called ethnic minorities in the UK—has received great attention in public and policy debates. There is ample evidence that ethnic minorities tend to live close to other members of the same group, and this applies both to recently arrived migrants as well as to their children born and raised in the UK. A reduction in the levels of segregation is typically regarded as a desirable outcome in the long term, for both ethnic minorities and wider society. On the one hand, the persistence of spatial segregation might be an impediment for social cohesion and, in some cases, it might also negatively affect the members of such neighbourhoods (e.g. there is some evidence of negative effects on labour market outcomes); on the other, the spatial segregation of ethnic minorities is often strongly related to neighbourhood deprivation.
While the evidence showing increases and decreases in segregation and that exposing the (positive and negative) effects of living in migrant neighbourhoods is vast, there has been little research, especially in the European context, on why segregation persists over time. This question is connected to another question strongly associated with the well-known literature on ethnic penalties, namely: to what extent do individuals with and without a migrant or ethnic background have similar opportunities in terms of their residential choices? My new article published in the journal Population, Space and Place presents new evidence on this issue, in the context of the UK (available upon request; a preliminary version can be found here).
My study compares the characteristics of neighbourhoods that white British individuals (with UK-born parents) and second-generation Indian, Pakistani, Bangladeshi, Caribbean and African minorities (i.e. born and/or mostly raised in the UK, whose parents were born abroad) access in their adulthood. In particular, I look at the probability of accessing ‘whiter’ and ‘better-off’ neighbourhoods. The analysis is based on the Office for National Statistics Longitudinal Study (ONS-LS), which is a unique dataset following 1% of individuals in England and Wales over a 40-year time span (1971-2011) and one of the largest and most comprehensive sources for studying ethnic inequalities in the UK. On top of its large sample (the study is based on more than 160,000 person*year records), the main advantage of this dataset is that next to individual variables (i.e. education, social class), household (i.e. parental social class, tenure, number of cars, overcrowding) and neighbourhood characteristics (i.e. deprivation and ethnic concentration, obtained from aggregated census data) can be attached to each individual for each year.

Second-generation ethnic minorities in the UK are less likely to access ‘whiter’ and ‘better-off’ neighbourhoods, compared to white Britons

This study shows persistent spatial inequalities between white British individuals and second-generation ethnic minorities in England and Wales. As can be seen from Figures 1 and 2, the share of second-generation ethnic minorities who reside in ‘whiter’ (i.e. less ethnically concentrated) and ‘better off’ (i.e. less deprived) neighbourhoods is much smaller compared to that of white British individuals (see blue bars vs. grey bar). Most importantly, these differences remain (at a lower scale, but still quite substantively) even when we compare individuals with similar characteristics in terms of the neighbourhoods and households in which they were raised, as well as their education and social class (see transparent bars vs. grey bar). Pakistanis present one of the highest differences in both outcomes: they are around 15% points less likely to reside in whiter and less deprived areas compared to white British individuals. 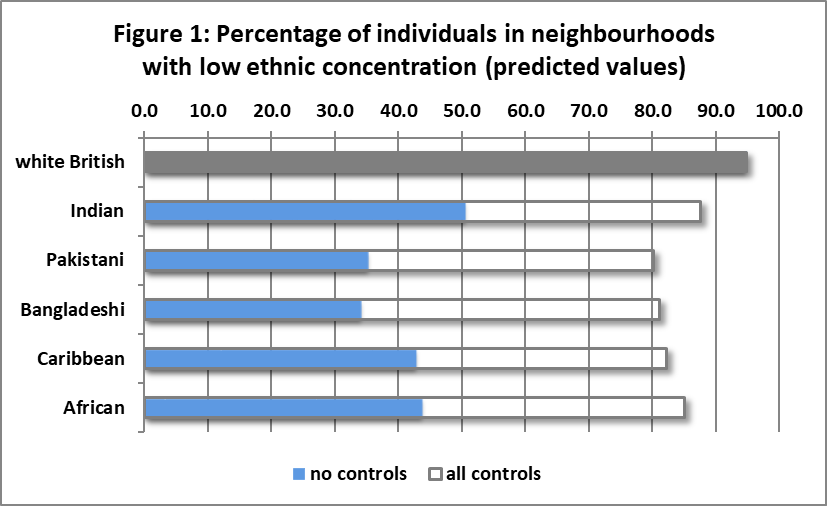 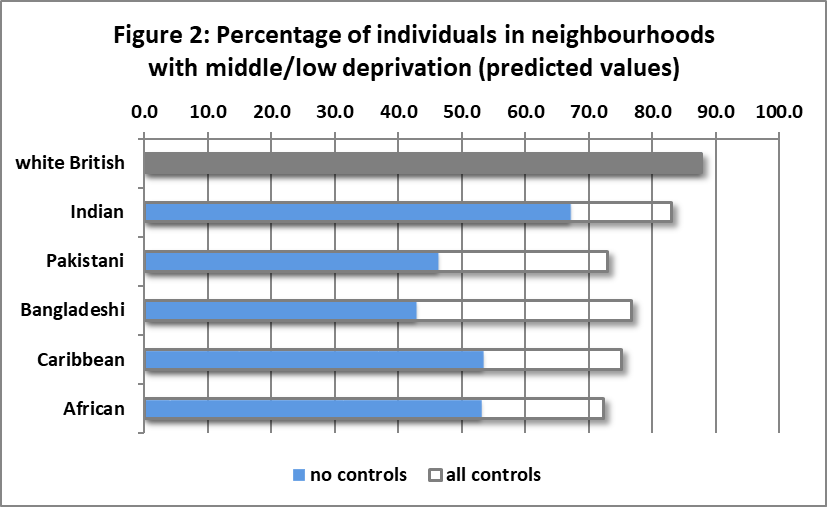 Population: Individuals between 30 and 55 years old (2011)
Source: Author’s own calculations based on ONS-LS
Note: The ‘neighbourhood’ is the Ward, a geographical unit used in local government elections, which contains an average of 4,000 individuals. Data on ethnic concentration and deprivation comes from the Census. Both variables are expressed in population-weighted quintiles. Neighbourhood ethnic concentration has five categories, where quintile 5 contains the wards with the highest concentration of non-white populations (Asian, black and other non-whites, excluding mixed-white ethnicities), where 20 percent of the non-white population lives. Neighbourhood deprivation is measured with the Carstairs scale (Norman and Boyle 2014). It summarizes four variables: proportion of male unemployment; proportion of overcrowded households; proportion of households with no car/van; and proportion of individuals from a low social class. For this five-category variable, quintile 5 contains the most deprived wards where 20 percent of the population lives. In the figure, neighbourhoods with “low ethnic concentration” belong to quintiles 1 and 2, while those with “middle/low deprivation” belong to quintiles 1 to 4.
Controls include: Age, gender, origin year, number of census points, tenure, number of persons per room, number of cars, parental social class, education, social class, civil status and presence of children in the household.

In most cases, but especially for Asian groups, the observed ethnic gaps in neighbourhood outcomes fall, but remain, among those with better educational and social class resources. The observed reduction in the ethnic gap or ethnic penalty in access to less concentrated and less deprived neighbourhoods among those with more socioeconomic and cultural resources is an encouraging finding of my study. In a context where second generation ethnic minorities are increasingly obtaining university degrees and improving their occupational opportunities, this finding suggests that ethnic minorities are able to use these resources to better position themselves in their choice of a neighbourhood. However, in most cases ethnic inequalities remain even among those with more resources. At the same time, those second-generation ethnic minorities with low socioeconomic and cultural resources find themselves in a particularly disadvantageous position.

Second-generation ethnic minorities’ neighbourhood outcomes are, in general, more strongly related to the characteristics of their neighbourhoods in childhood

The study also finds that the relationship between childhood and adulthood’s neighbourhood characteristics is generally stronger for second-generation ethnic minorities, especially for Pakistanis and Bangladeshis, than for white Britons. This implies that minorities raised in areas with high ethnic concentration and high deprivation are, in most cases, much more likely to live in such neighbourhoods in adulthood. Being raised in a neighbourhood with a higher share of members of the same group is likely to foster stronger preferences for co-ethnics, especially among Asian groups, known for their strong ethnic community ties. At the same time, the fact that this effect applies also when studying neighbourhood deprivation suggests that, rather than a matter of choice, neighbourhoods might also constitute ‘poverty traps’ for these groups.

Ethnic minorities’ spatial integration is increasingly part of the European policy agenda, including that of the United Kingdom. This has come hand in hand with increasing debates regarding (the failure of) multiculturalism and the need to create a more cohesive society. Of great importance in this debate has been the evidence highlighting the potential worrisome consequences of ethnic spatial segregation and its link with neighbourhood deprivation—which can lead to an accumulation of different sources of inequality. Following from these concerns, much of the emphasis of United Kingdom’s policy agenda has been directed to promote equality of opportunities across different ethnic groups as well as to make neighbourhoods more integrated. In this context—and to improve (and extend) the current policies—it is of crucial importance to understand the long-term dynamics behind the production and reproduction of ethnic spatial inequalities; much in the same way that an effort has been made to understand the dynamics of ethnic inequalities in education and the labour market. My study shows that ethnic spatial segregation is, in part, the product of time-persisting ethnic inequalities in the access to neighbourhoods and that these inequalities are conditioned both by childhood and by adult resources. More research is necessary to understand the role of preferences and constraints in these processes.