Feeling threatened by immigrants in your neighbourhood?

Using panel data on attitudes to immigrants in the Netherlands, we set out to test the so-called ‘defended neighbourhood’ thesis, a derivative of the ethnic-threat perspective. This statistical analysis, part of a research project funded by the Swiss Network for International Studies (SNIS) to examine attitudes to foreign nationals and immigrants did not support our expectations, and seems to point to contact with immigrants leading to more positive attitudes. A greater proportion of immigrants coming to live in a neighbourhood is associated with natives having more positive views on immigrants. A change in the proportion of visible non-Western immigrants appears, in particular, to be relevant for attitude changes.

Over the past decades, the proportion of immigrants has greatly increased in western European countries, particularly in cities. This increasing diversity has affected societies in destination countries in economic, cultural, and political terms. For example, parallel to the arrival of immigrants various populist radical right parties have emerged, claiming to defend the interests of natives against what they claim are negative consequences caused by immigrants. For example, it is claimed that immigrants ‘take away’ jobs from natives or cause a strain on the healthcare system. The popularity of these parties provided us with an incentive to study how anti-immigrant attitudes among natives are shaped. In this respect, we specifically focused on the residential context of individuals to see whether this influenced people’s feelings. To what extent, then, are the anti-immigration attitudes of natives shaped by the proportion of immigrants living in their neighbourhood?

We started with the ethnic threat thesis. The ethnic threat perspective suggests that natives feel threatened by the arrival of immigrants because they are worried that material resources will be unfairly distributed, or because they fear cultural deterioration. This fits with the fact that populist radical right parties have gained support in many Western European countries. A derivative of the ethnic threat perspective we focused on is the defended neighbourhood thesis. This theory suggests that when neighbourhoods undergo sudden or large demographic changes, natives are more likely to oppose immigrants. The intuition here is that where there are few immigrants, the arrival of numerous new immigrants has a large negative impact on attitudes. By contrast, in areas where there are already many immigrants, the arrival of additional immigrants does not affect attitudes overly. With our study we add to the existing literature by including time dynamics and by paying attention to the type of neighbourhood. For this reason, we focus on small geographical units that correspond to the areas people generally spend their lives in. We analyse how changing residential contexts shape anti-immigrant attitudes over time. The inclusion of time dynamics allows us to make stronger claims about causality (for instance, whether increased proportions of immigrants cause increased anti-immigrant attitudes). For our analysis we used data from annual online surveys (LISS Panel, 2008 to 2014) asking respondents about how they feel about immigrants on a scale from 0 to 5, and connected this information to annual changes in immigrant populations within their neighbourhoods.

Using fixed-effects panel analysis, we found that a larger change in the proportion of immigrant residents is associated with more positive native views on immigrants. This means we found no evidence for the defended neighbourhood thesis. The figure shows the coefficients of the change in the share of immigrants in the neighbourhood. Each colour refers to a different model, whereas the control variables at the individual and contextual level are the same across models. The dots give the regression coefficient, and the lines are the standard errors. In the first model (blue, on the left), we included the share of immigrants of all nationalities – as is commonly done in the literature. The coefficient is below the zero line, suggesting that an increasing share of immigrants in the neighbourhood is associated with less negative attitudes. 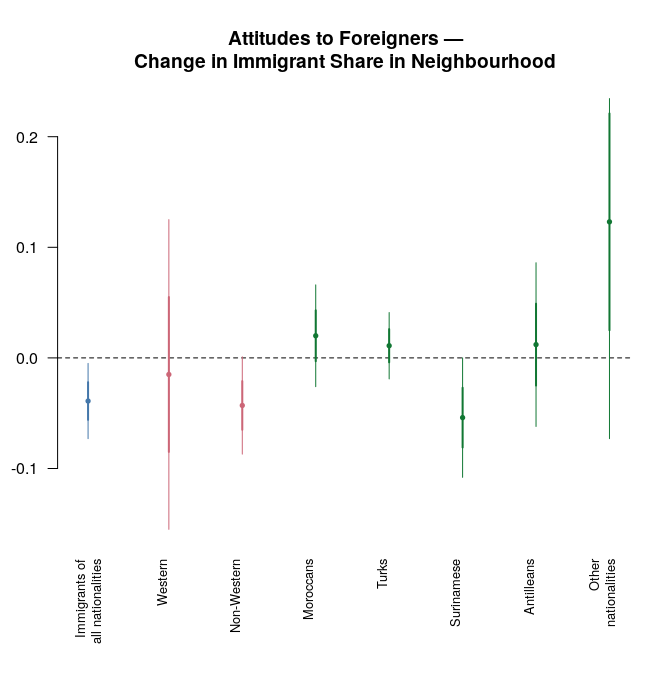 While our findings run against our theoretical expectations, based, as they were, on the defended neighbourhoods thesis, they are in line with contact theory. Contact theory opposes the ethnic threat perspective and postulates that personal contact between members of different ethnic groups actually reduces anti-immigrant attitudes. The assumption is that contact stimulates mutual trust and understanding. However, our results only provide indirect support for contact theory: it could be that threat and contact operate in tandem. For example, it is possible that natives initially feel threatened by the presence of immigrants, but subsequently interethnic contact moderates this effect. Thus, our study provides an incentive to further examine how residential contexts might foster tolerance, taking into account the perhaps more temporal dimensions of any threat. 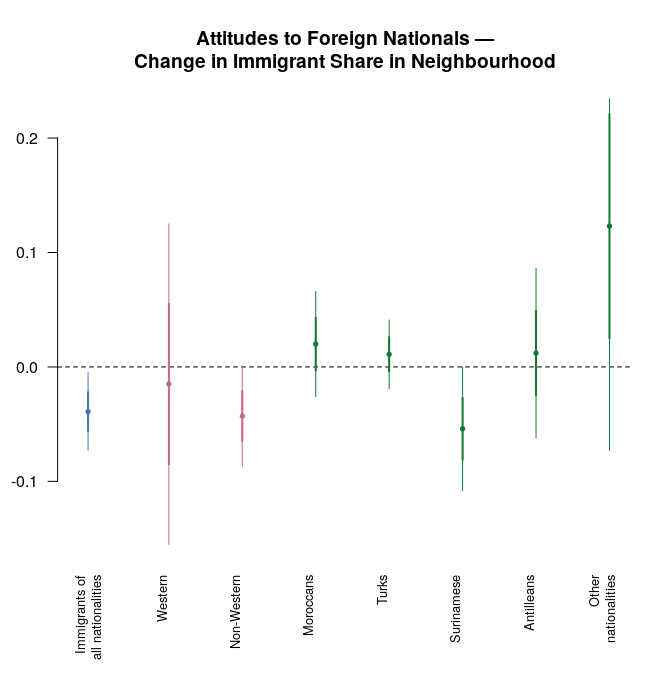 Note: The EUI, RSCAS and MPC are not responsible for the opinion expressed by the author(s). Furthermore, the views expressed in this publication cannot in any circumstances be regarded as the official position of the European Union.
|  attitudes to immigrants community defended neighbourhoods neighbourhood Netherlands