Not so long ago, you could go to an airport and find it deserted. This is no longer the case, especially in Europe and Asia, where one only rarely enters airport terminals (as well as bus and railway stations) that are not full to capacity. This impression is substantiated by new statistical evidence on the impetuous rise in the international movements of people. Between 2011 and 2016 alone, individual cross-border travels on planet Earth increased by 25 per cent. In absolute numbers, an estimated 2.9 billion international trips occurred worldwide in 2016 by air, land or water transportation — around 600 million more than five years earlier.

A new open-access dataset on mobility between countries worldwide

This estimate stems from a novel dataset created by the Global Mobilities Project (GMP) at the EUI’s Migration Policy Centre (MPC), in collaboration with the Knowledge Centre on Migration and Demography (KCMD) of the European Commission’s Joint Research Centre: the Global Transnational Mobility Dataset. Interested readers are invited to explore the data on the KCMD’s Dynamic Data Hub, a free tool that allows users to delve into the travel relations between countries globally on an interactive world map (see screenshot below). You can also request access to the data itself by sending an email to [email protected] and read more about the data specificities and limitations in a recent EUI working paper (Recchi, E., Deutschmann, E., Vespe, M. 2019. Estimating Transnational Human Mobility on a Global Scale, EUI RSCAS Working Paper – MPC Series 2019/30. Fiesole: European University Institute).

The dataset originates from the combination of two basic sources: UNWTO data on international arrivals and data on international flights from Sabre, a travel industry company, which were compared and adjusted to create country-to-country estimates of human cross-border travels worldwide. The dataset contains the estimated numbers of trips between countries and may thus include multiple travels by the same persons. Focusing on yearly flows of mobility (whatever their durations are), our dataset complements estimates of migration flows, which usually denote stays abroad longer than 12 months. This dataset also advances previous usages of tourism data, capitalizing on an additional source and new estimation methods. Finally, the Global Transnational Mobility Dataset parallels recent and alternative attempts at measuring population mobility with digital sources.

Explorations of the dataset reveal that the large majority of international movements take place at a regional scale: 80 percent of global cross-border travels occur within, not across continents. Europe is the region that receives and generates the overall largest number of international movements. Intraregional trips are particularly numerous, reaching 1.2 billion per year, and grow at a faster pace than the world average. A similarly steep increase is found in Asia, where intracontinental cross-border travels have soared from about 600 million to over 800 million yearly in the 2011-2016 time span. The Americas are far behind (close to 300 million, and rising more modestly). The smallest numbers of trips – and the most timid increases – take place in Africa and Oceania. At the global scale, transnational mobility is thus highly stratified geographically. Its volume is about 20 times greater in Europe than in Africa, despite the much larger population of the latter continent. There is thus no clear catch-up effect of the less mobile regions. Rather, the divergence between continents in terms of international (and particularly, of intraregional) human mobility seems to widen over time.

The transnational mobility of persons showcases the “human face” of globalization – the extent to which people, not goods or capital, cross borders and thus contribute to a tighter interconnectedness of the planet. As existing long-term figures show a rising trend in global mobility since the early 1960s, our new, more sophisticated estimates indicate that this particular aspect of globalization has not at all reversed or slowed down in recent years. If anything, the trend has been accelerating in the 2010s. While there are mounting concerns about the ecological sustainability of this growth path – witness the emergence of concepts like ‘flygskam’ (literally: the shame for the environmental costs of flying) – it remains to be seen whether such behavioural change and increasing political pressure to act in the face of global warming will reverse this long-lasting upward trend in travelling.

At the same time, it is important to emphasise that a rise in the volume of overall travels does not necessarily mean a proportional increase in the actual population on the move. We can in fact suspect that a large part of the increase is due to more travels among the economically better-off. Richer people can afford more frequent and distant journeys. At the macro level, the size of a country’s outgoing trips and its GDP per capita are strongly and significantly correlated (r = .63), our analyses show: 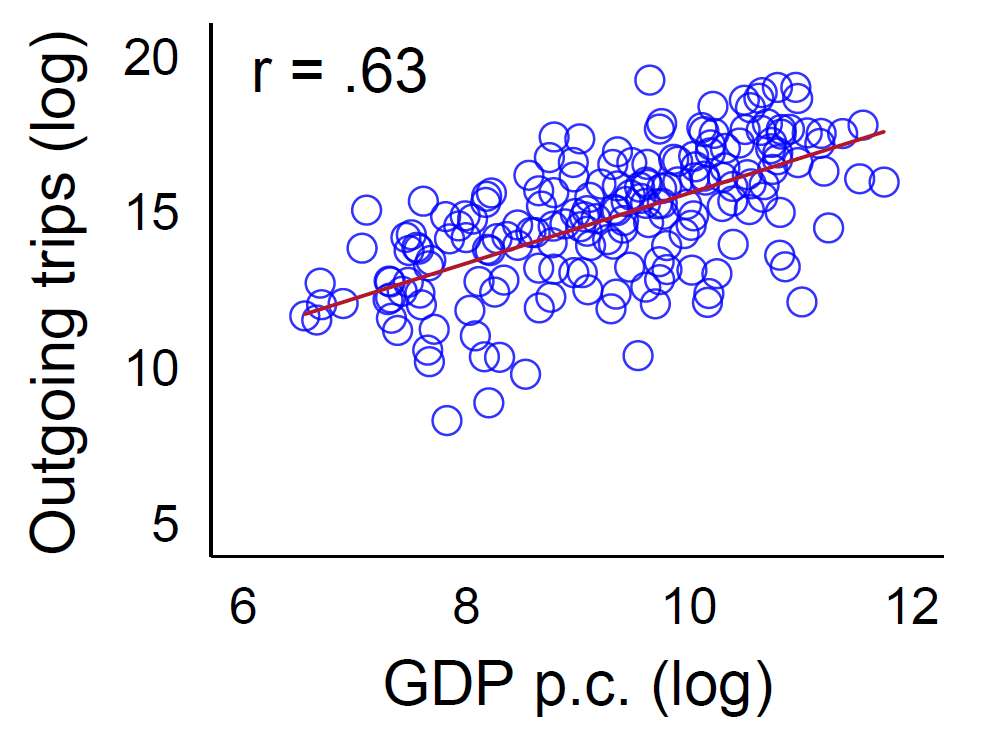 Transnational human mobility has huge and pervasive economic, cultural and social effects. Economically, tourism employs about 10 per cent of the global workforce and produces 10.4 per cent of the world GDP. Worldwide travels have come to weigh in on macroeconomic equilibria decisively. For instance, the impressive increase of international trips among its resident population has now redressed the decade-long surplus of China’s current accounts, generating $240bn in tourism expenses abroad in 2018 only. Culturally, cross-border mobility upholds a budding transnationalization of social relations and lifestyles, and possibly cosmopolitan stances. Socially, cross-border mobility flows are the gateway to potential migration – either by staying in the country of destination, or by engaging into short-term, shuttle or circular migration.

The freely accessible Global Transnational Mobility Dataset promises to be a valuable resource for future analyses wishing to dig deeper into the multifaceted relationships between macroeconomic variables, sociopolitical characteristics, governmental actions, and the changing structure of individuals’ mobility flows between nations, tracking or possibly anticipating major transformations in the human geography of the world.