The Greying of Europe and Public Opinion about Immigration

Population ageing is an overlooked reason for why public opinion about immigration differs across European countries. Some European countries have more rapidly ageing populations than others, meaning that their societies are composed of a greater proportion older people. And this age composition has important implications for what the public, on average, thinks about immigration.

Ageing Population vs. Support for Immigration by W. European Country 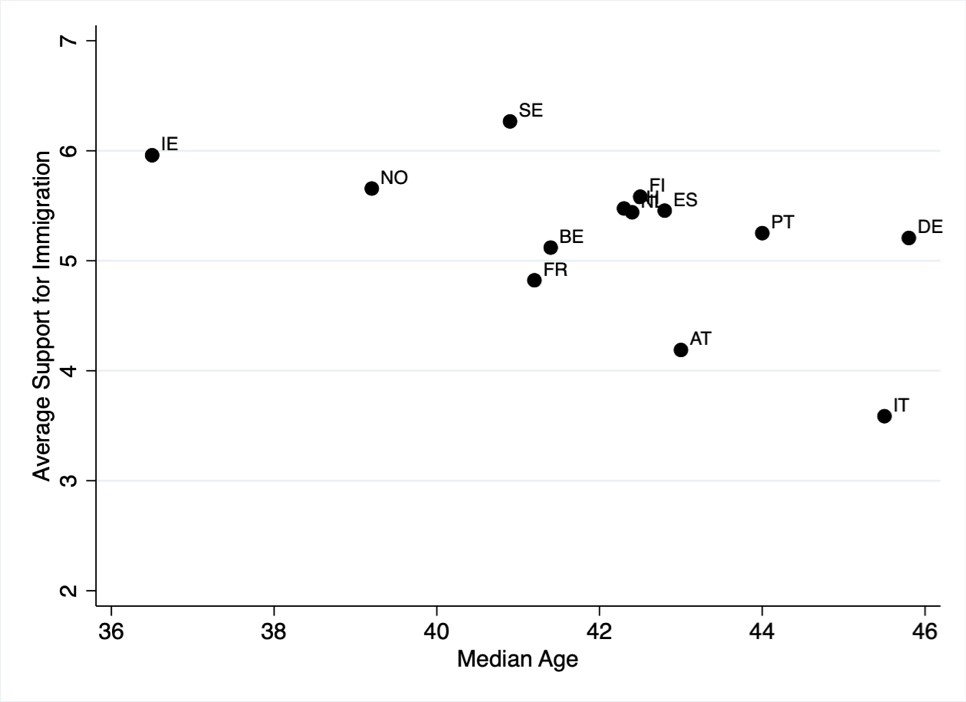 Generally, older people are more concerned about immigration than younger people. This is not because people become more against immigration as they get older, nor is this due to the fact that life experiences in older life (such as going into retirement, becoming a grandparent, or experiencing old age illnesses) make a person more concerned about immigration. Rather, the age of a person holds different substantive meanings. In addition to their placement along the lifecycle, a person’s age also indicates the year of their birth, which carries its own social significance. Birth cohorts, individuals born around the same time, can experience different socializations through a unique sequence of events and circumstances which have long-lasting impacts on their socio-political attitudes. Thanks to recent research, we know that older people are more against immigration because they belong to different socio-political generations.

Certainly, the hope for Europe’s more tolerant future all hinges on how today and tomorrow’s young Europeans experience immigration in their society. We cannot assume that the next generations of Europeans will inevitably be more open-minded and tolerant than previous generations. This all depends on how young people are socialized about immigration. How young people develop their understandings and views about immigration depends a culmination of many contributing factors in their life course including: family, place, child care experiences, school experiences, current events, and the general political climate during their formative years.

For the time being, an ageing population means that older people outnumber younger people not only in European society but also at the ballot box. The result is that more restrictive views of older people towards immigration also carry more electoral clout. The rise of “pensioner populism”, coupled with continued population aging, means that the generational gap in immigration opinion is not closing anytime soon.